There are two main types of standalone post drivers on the market: manual drivers and gas-powered models. Both designs are useful for different purposes. 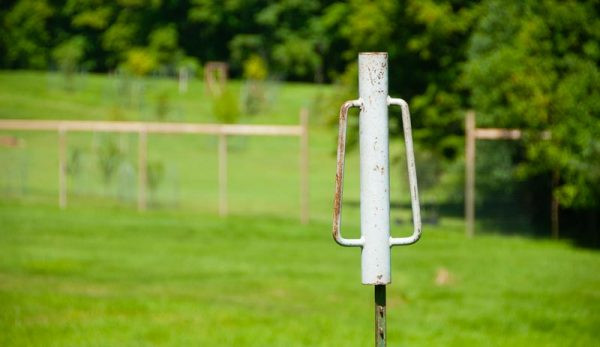 There are so many ways to use T-posts (and other reusable metal posts) on farms. Whether youâ€™re putting up fencing, staking a fruit tree or just marking a rock in a field, T-posts are a handy asset no farmer should be without. Of course, T-posts arenâ€™t very useful unless you have a way to install them. Thatâ€™s where post drivers come into play.

There are two main types of standalone post drivers on the market: manual drivers and gas-powered models. Manual drivers rely on your muscles and their own weight to install posts in the ground. Gas-powered drivers, on the other hand, typically employ 2-stroke or 4-stroke engines to pound posts into place with thousands of strikes per minute.

Both designs are useful for different purposes, so letâ€™s explore some of the pros and cons offered by each.

Read more: T-posts are some of the most versatile tools on any farm.

Certainly the biggest advantage of a manual post driver is its simplicity. There are no moving parts, nothing that requires maintenance or fuelâ€”itâ€™s just a solid piece of steel. You lift it up, you drive it downward onto a post, and the post inches its way into the ground.

Repeat the process until the post has reached the correct depth, and youâ€™re good to go.

This simplicity means manual post drivers are perfect for tossing into the back of a wagon for hauling around whenever and wherever you might need one. Aside from a little rust in the long term, they wonâ€™t suffer for living an outdoor life.

Manual post drivers are also lightweight compared to gas-powered drivers (generally coming in between 10 and 30 points), and because theyâ€™re simple, theyâ€™re less expensive too. You might be able to find a smaller one for $20 or so.

Manual post drivers can be tiring to use for extended periods of time because you must lift and thrust down the driver five, eight or 10 times per post (maybe more), depending on the size of the post and the conditions of the ground.

Read more: A wagon full of tools can save you time and energy on farm tasks.

A gas-powered post driver does most of the work for you! There isnâ€™t much muscle power required.

You simply hoist the driver on top of the stake and push the trigger, prompting the driver to rapidly pound the post into place. Gas-powered post drivers are particularly helpful for installing large posts (3-4 inches in diameter) or dozens of posts all at once.

Such projects can be exhausting with a manual driver, so a gas-powered model will save you a lot of effort. Just as importantly, vibration-absorbing designs reduce the pounding felt by the user.

Gas-powered post drivers are heavier than manual drivers, often tipping the scales between 30 and 45 pounds. This makes them a little less convenient to carry around.

They require routine maintenance just like any other tool with a small engine, and theyâ€™re considerably more expensive than manual drivers, costing hundreds or even thousands of dollars.

Of course, you donâ€™t necessarily have to choose one over the other. If youâ€™re frequently installing large posts and know a gas-powered model will save you a lot of time and effort, by all means make the investment.

But if the simplicity and convenience of a manual post driver sounds appealing for quick jobs, why not add one to your arsenal? Theyâ€™re not very expensive, and sometimes having both types is the perfect recipe for maximum productivity.