This poultry paradise is becoming a social media hit thanks to a one-eyed turkey named Stew and a flock guardian called RJ. We speak with a farm founder. 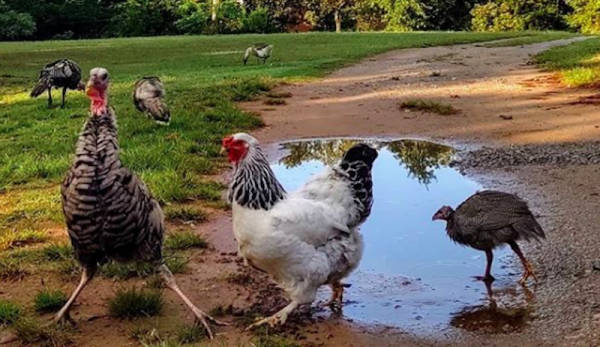 Founded by Angela Greenroy, the ranks include chickens, turkeys, geese, ducks and guinea fowl. And the farm’s daily adventures are documented on the its popular Instagram account.

It's been a good day! Cooler weather, the hubs doing some yard work, errands done, school canceled for tomorrow already (in expectation of a nasty storm), and friends over for some grass fed beef and lamb from @realranchgrassfed. ? Here's sweet Dru for #chickenselfiesunday with Sam @chickens.and.wine. Don't tell the others but she's my favorite here at #proseandconspoultryfarm. ?

I spoke to Angela about starting her farm (it involves insects), how the various residents all get along, and a couple of superstar turkeys named Stew and RJ.

The Beginnings of Prose and Cons

Someone ticked off Mama, and Mama hasn't had her coffee yet. #lessonsfromapoultryfarm ŌśĢ We were woken at 3 am to crazy winds. Got up, shut some windows, thought, "I hope my birds are okay," and went back to bed. And it's a beautiful, wet morning. ŌśĆ’ĖÅ #proseandconspoultryfarm

Asked why she started a hobby farm, Angela gets right to the point: “Bugs! Specifically, ticks.”

In a bid to ward off the pesky parasites, Angela added ducks and then guineas to her homestead.

Next she persuaded her husband they could really do with some chickens. Then came turkeys, at the behest of her youngest son, and, finally, geese.

“Turkeys and chickens are normally fine together,” says Angela, describing the farm’s hierarchy and social equilibrium.

“Guineas do better the larger their clique. But the guinea males will try to keep the chickens and turkeys away from the girls and can end up fighting with the turkey boys at the start of spring.”

The farm is usually a peaceful place, as long as the residents are allowed to free-rangeŌĆöalthough Angela has needed to “take steps to keep everyone safe” when they’re enclosed.

Oh, and it’s anticipated that when 10 keetsŌĆöor baby guineasŌĆögrow up, they will “help balance the guinea attitude.”

Get to Know Stew the Turkey

How's that working for you in this heat, Stew? ? #proseandconspoultryfarm

Stew is one of the stars of the farm. He’s a broad-breasted white turkey who came to the farm with a roll call of physical issues.

“His skull was pushed in on one side, he was missing an eye, and he has a crossbeak,” says Angela.

“Stew is a big sweetie, but if given the run of the land he will often visit the neighbor’s coop and fill up on scratch. Unfortunately, with Stew’s beak, the chicken waterer over there causes him to impact his throat with the seed.”

(Back home, Stew gets fermented feed and drinks from a larger-than-usual bucket of water.)

“In this picture, Stew got himself into a portion of chicken wire that was opened up to allow the chickens access to the full run,” explains Angela.

“Because he only has one eye, he could not see his way out!”

RJ free ranges by fighting with Stew through a fence. #wastedopportunity ? The ten little keets had 2 mamas. Obviously one was taken yesterday. The other is a tiny bantam, about the size of a month-old keet. She decided to help her babies escape the run. So one tiny hen running around with her babies with deprived bachelors in the yard. ? How's your day going? ? #proseandconspoultryfarm

RJ is another of the more prominent turkeys on the farm. He’s a Narragansett heritage breed that came from Angela’s friends over at 5R Farm.

“Last year, they mailed me eggs, but only RJ hatched,” says Angela.

“RJ is a beautiful bird and a fantastic flock guardian,” she continues, “but he hates me with a passion! It could be because he wanted a girlfriend when spring came around.”

"I know you have some young snoods, but look at my magnificence. You wouldn't trade me in for a new, younger man, would you?" ? I don't know, RJ. A man who acts ugly on the outside looks far less pretty than a nice, polite one. ? Regardless, I do believe RJ is molting, which adds to his #publicshaming on this #turkeysnoodsunday with Stacy @5rfarmoregon. ? #truthhurts #ProOrCon #proseandconspoultryfarm

If you follow along with the Prose and Cons on Instagram, you’ll pick up on regular posts hashtagged #TurkeySnoodSunday.

“It’s a day to show off our snoody birds because turkeys are curious, social and interesting animals,” explains Angela. She adds that the idea initially came from the 5R Farm Instagram account.

Contemplating Your Own Turkeys?

Stew: You may be prettier, but check out my pecks. ? My boys aren't getting along. Hopefully, as the seasons change, we'll get past this. This was the other day when I attempted to let them hang out again. Sharing with Stacy @5rfarmoregon for #turkeysnoodsunday. #proseandconspoultryfarm

If all this talk about Stew and RJ has you thinking about bringing a couple of turkeys into your own hobby farm, here’s Angela’s advice on how to make it an easy transition:

“Build them a roost off the ground or they will find a tree they like. Socialize with them and enjoy themŌĆötheir antics are hilarious. Also, boost their immune systems with herbs and spices when they are young, and talk to them a lot!”