Chickens can be a tempting treat for a number of predators, who see your flock as an extension of their natural habitat. Here are some ways to deter hungry wildlife. 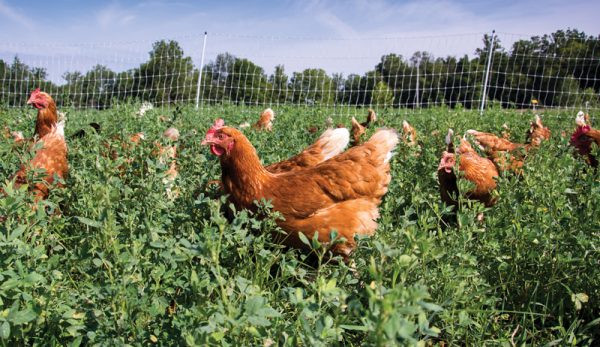 Your chickens are being watched. Whether you know it or not, critters around your farm are waiting for their chance at an easy chicken dinner. All it takes is a coop door left open after dusk or a damaged hole in the fence.

Because our chickens are so prone to predation, we have to think like predators in order to convince them that invading our coop isnâ€™t worth their time.

Make your coop and surrounding yard and pasture distasteful and inaccessible to predators. Employ a stock companion, such as a well-trained dog or an older child looking for extra pocket money, to deter hawks from landing and frighten ground predators away from chickens.

Geese are also good guard companions with their loud warning honks. A ganderâ€™s hiss and threatening wings can chase off stubborn wildlife.

A rooster is very helpful in free-range and contained flocks. A rooster will hustle his girls inside or under cover as soon as a threat appears. One guy for 10 girls is a good ratio.

Interestingly, roosters have different calls for predators approaching chickens from the sky or the ground.

Hang bright ornaments around the coop, such as CDs, bird-scare ribbons, wind chimes, bells or plastic owls. Place solar-powered night animal predator lights around the coop. Read instructions carefully as youâ€™ll need to hang the light at the right level for certain animals.

Take away any food, such as birdseed, suet and food scraps. Donâ€™t leave out pet food, and secure the lids on garbage cans.

Read more: Check out these 10 tips for keeping chickens safe from predators.

The beautiful hawk, soaring majestically, is a sight to behold. But itâ€™s one that makes our chickens nervous.

Your free-range chickens are particularly in danger from hawks that can land on them, kill them and eat them right then and there.

Itâ€™s important to have predators on your land to keep prey such as rabbits and voles from causing crop damage and contamination, but a hawk sees rabbits and chickens as the same thing: food.

Donâ€™t get discouraged. You can still work in harmony with your resident raptors. And if you have a resident raptor youâ€™re caring for your land correctly!

First of all, do not wipe out the hawkâ€™s habitat. Raptors are federally protected under the Migratory Bird Treaty Act, so you canâ€™t harass it in any way or try to force it off your property. You can only deter it.

Hawks are diurnal, so they hunt during the day. You may have seen them perching high up, such as on a dead tree or telephone pole. What they are doing is looking for movement.

Red-tailed hawks are the raptors that take the biggest animals, such rabbits and squirrels, so learn to identify this hawk. Red-tailed hawks have a reddish hue on the tops of their tails, a dark bellyband and dark wingtips. (Check out All About Birds for more information.)

Once a hawk discovers that chickens are an easy food source, it will continue to hunt until itâ€™s no longer worth its time.

To break the hawkâ€™s behavior, keep your chickens in a coop or in a safe enclosure for a month or two, until the hawk keeps getting thwarted. You can also employ the guardian animals mentioned previously.

You can protect the outdoor run by covering it with plastic mesh fencing or by crisscrossing string over the top.

Always give your chickens a place to hide while out in the pasture. This can be a hay wagon, a raised coop, small hutches, hedges or a simple plank over two large buckets. Place food and water in protected areas.

If the hawk continues to attack, you may have to forgo free-ranging altogether. You can bring fresh clipped grass to your hens as long as itâ€™s free of chemicals and as long as you have poultry grit available.

Read more:Â Identify the predators on your land by the tracks they leave.

Wildlife canâ€™t bother your animals if you take away every opportunity to enter the coop. You want a large yard where chickens have room to explore but still offer protection.

Raise your coop off the ground by at least a foot. Block the space underneath the coop with chicken wire buried 2 feet below the ground to discourage digging. Do the same with your permanent fence surrounding the coop.

If burying the fence isnâ€™t an option, extend your fencing along the ground for a few feet. (Both burying and extending is not necessary with electric mesh fencing.)

Surround your coop with a quality wire that dissuades climbing. And make it high enough (at least 6 feet) to stop coyotes and foxes from jumping over. Raccoons can reach through a fence and grab a bird if they donâ€™t have enough room to get away.

If your coop is small, such as a movable arc, consider using a smaller meshed hardware cloth instead of chicken wire. Because raccoons will easily tear a screen, hardware cloth is a good choice for windows.

Secure door latches against busy paws with snaps or carabineers.

Teach your resident livestock that your fence is not to be trifled with by stringing hot wire across the top of the fence or setting up a electric mesh poultry fence around the coop or free range area. (These fences are easily moved and can be solar-powered.)

One shock is all it will take to keep most predators away from your chickens for good. However, make sure to check your fence from time to time with an electric fence tester to make sure itâ€™s still hitting.

For free-rangers, donâ€™t let the pasture grow so long that the chickens canâ€™t see whatâ€™s creeping up on them. Make sure there is open space so your birds will have a chance to get away.

If nothing works, you may have to set up a humane trap or call a company that specializes in trapping and releasing animals. Skunks can be difficult to trap for obvious reasons! Wildlife usually roam in a set area, so removing a frequent visitor and releasing it into a wild area should remove the problem for good.

Wildlife made their home on your property long before you arrived, so itâ€™s natural for them to assume your chickens are part of their world.Â  Itâ€™s up to you to make them change their minds in a humane and fair way and let them know that your chickens are off the menu.