Protect Your Bees Against Common Predators

From mice to skunks to bears (and even people), predators can do a number on bees, so follow these easy steps to keep trouble at bay. 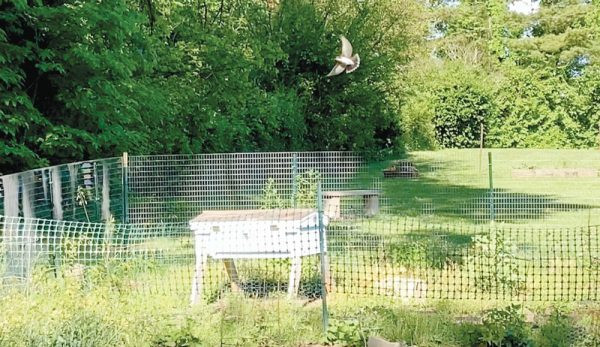 By now, we‚Äôve grown used to varroa mites, hive beetles and other small pests stopping by our honeybee hives uninvited. But what about even larger (and hairier) predators to our bees? Skunks, bears and mice, among others, can really set your apiary back.

But it doesn‚Äôt necessarily have to be this way.

Penn State Extension Educator Robyn Underwood has been involved with apiaries and beekeeping for 27 years. ‚ÄúI tell people I‚Äôve been keeping bees since before the turn of the century!‚Äù she says.

In that time, Underwood has seen plenty of honeybee predation. And she‚Äôs figured out how to mitigate much of it.

‚ÄúI would say the biggest issue would be skunks,‚Äù Underwood says. ‚ÄúThey‚Äôre definitely the most common.‚Äù Night after night, these nocturnal predators amble over to beehives, scratch at the entrances and snarf down any bees that come out to investigate.

If left unchecked, these predators can inflict substantial losses to our bees.

Fortunately, the fixes are relatively simple. If your hives are very low to the ground, elevate them a couple of feet. Putting them up on hive stands or even some concrete blocks will force visiting skunks to stand up on their hind legs to feed. This, in turn, exposes the skunks‚Äô more vulnerable bellies to the hive‚Äôs defending workers.

As they fly out of the hive, some of the bees may deliver a few well-placed stings, causing the skunk to retreat.

‚ÄúMy go-to is to put carpet tack strips on the landing board,‚Äù Underwood says. ‚ÄúThe awesome part about them is that they‚Äôre super cheap, and they‚Äôre meant to have nails that go down and nails that go up. So, you don‚Äôt even have to bring anything but a hammer and the piece of carpet tack strip. The nails are already in the wood, and you just nail it on.‚Äù

With the sharp carpet tack strips nailed in place, any skunks attempting to scratch at the landing board end up jabbing their paws.

‚ÄúThe carpet tack strips don‚Äôt stand up for more than a year, because weather just ruins them,‚Äù Underwood says. ‚ÄúBut all you need to do is get [the skunks] to stop and lose that habit and go find other food.‚Äù

As an extra deterrent, some beekeepers also put carpet tack strips on the ground in front of their hives.

Read more: Beekeeper (and TikTok star) Erika Thompson of Texas Beeworks is all about her bees.

Sure, skunks cause trouble. But they‚Äôve got nothing on bears.

‚ÄúBears are the most damaging,‚Äù Underwood says. They‚Äôll destroy beehives to get to the honey stores and larval bees. And once they get a taste for your apiary, they‚Äôll be back for more.

Your best bet against bears? Don‚Äôt let these predators get close to your bees to begin with. To that end, Underwood recommends erecting an electrified bear fence. ‚ÄúMy bear fence [has] four wires, but really only the top three are generally electrified, because you‚Äôre trying to avoid it getting shorted out by vegetation growing,‚Äù she says.

Provided you are able to keep up with the weed whacking, you might choose to electrify the extra wire as an additional skunk deterrent. ‚ÄúThe fourth wire at the bottom is available to be electrified,‚Äù she says. ‚ÄúYou just have to hook it to the one above it with something that conducts and then you have a lower wire that‚Äôs live.‚Äù

Her fence design also includes a special kind of bait: cheap bacon. ‚ÄúPeople think of bears as, you know, you need barbed wire and all this crazy stuff,‚Äù Underwood says. ‚ÄúBut that‚Äôs because you‚Äôre actually thinking that the electric shock has to go through their fur coat. Really, what you need to do is get them to put their sensitive parts ‚Äî like their noses ‚Äî on the fence.‚Äù¬Ý

That‚Äôs what the bacon‚Äôs for. ‚ÄúApparently, bears can actually smell the electricity,‚Äù she says. ‚ÄúOnce they know what it is and that it hurts, they will take a wide berth around anything like that‚Äîand they‚Äôll teach their babies to do that as well.‚Äù

For that fence design to work best, though, beekeepers must put it up preemptively.

‚ÄúPut it up if you think there could be a bear around,‚Äù Underwood says. ‚ÄúThat gives you the opportunity to teach them to stay away from beehives, rather than having them find them, love them, want them and then [you] trying to keep them out.

“That‚Äôs much, much more difficult. In fact, I would just tell people to move their bees [at that point.]‚Äù

As with bears, keeping mice out of your hives is also a matter of prevention. They flock to warm, overwintering hives during the fall and winter months.

‚ÄúMice become a problem when the bees start to cluster,‚Äù Underwood says. ‚ÄúBecause usually when they cluster, there are several inches below the bees that is sort of empty. The mice‚Äîas long as they don‚Äôt disturb the bees‚Äîcan go in and build a nest on the bottom board.‚Äù

Building those nests means chewing on hive frames and bringing foreign material into the hive. Mice will also urinate inside the hive, smelling up the place to such a degree that your bees may not want to remain there in the future.

To keep mice out, you need a strong, physical barrier.

‚ÄúDifferent beekeepers do different things, but I keep my entrance reducer on with the larger opening‚Äîthe 4-inch opening‚Äîyear-round,‚Äù Underwood says. ‚ÄúI never change it unless there‚Äôs robbing. Then I‚Äôll go down to the smaller one.‚Äù

She also recommends applying hardware cloth to the front of the hive.

Of course, some predators to bees come dressed in feathers rather than fur. Shrikes, kingbirds, martins, swallows and kites are just some types of birds that routinely swoop by to snatch honeybees right out of the air.

Depending on how many hives you have, these winged hunters can do a surprising amount of damage.

In a 2017 post on the online community BeeSource.com, beekeeper Michael Gillmore had hives set up on a farm located near a large pond. ‚ÄúMore than once, I would drive up to the hives to see numerous barn swallows flying in a circular pattern around the pond,‚Äù he wrote. ‚ÄúAnd as they neared the hives, they would all go into a diving flight pattern right in front of the hives, then back up to cruising altitude around the pond again. Not sure how many there were‚Äî20 to 30.‚Äù

Concerned, Gillmore did the math. ‚ÄúLet‚Äôs say I have 30 barn swallows flying around the lake and eating a bee each time they circle in front of the hives,‚Äù he wrote. ‚ÄúAnd maybe they make 100 circuits over the course of a day. That‚Äôs 3,000 healthy foraging bees lost every day just from the birds.

‚ÄúIf there‚Äôs 10 colonies, [the birds] aren‚Äôt a big deal. But, if it‚Äôs only two or three [hives,] that has to have an impact.‚Äù

Which bees the birds eat matters, too. According to a 2012 study appearing in the International Journal of Scientific & Engineering Research, the presence of bee-eating birds reduced the flight survival rates of virgin honeybee queens.

The bee-eating birds also had a chilling effect on the activity of foraging honeybees. ‚ÄúDuring their presence in the apiary [bee-
eating birds] produce specific sounds that honeybees can recognize, causing them to stay in their hives,‚Äù the authors wrote.

Just what did Gillmore do about those ravenous barn swallows? He moved his hives away from that pond. And, when it comes to these insect-predating birds, that may be just about all you can do. Keeping your queen-mating yards well away from lakes and ponds may help mitigate problems with dragonflies as well.¬Ý

With skyrocketing prices for pollination services, beehives‚Äîsadly‚Äîhave also become increasingly tempting targets for human thieves. To combat the problem, keep your hives as far from common lines of sight as possible.

You might also want to monitor the apiary with a wireless, motion-sensitive trail cam. Some beekeepers have also added GPS tags to the inside of their hives. These can act as theft deterrents in and of themselves.

Or, if the tagged hives are stolen, they may be able to be tracked and recovered.

In response to successful and would-be thieves, beekeeping groups, farmers and the lay public are working together to protect hives against human predators and prevent further thefts. In some areas, reward money is being offered.`

And groups such as the California State Beekeepers Association have launched awareness campaigns with clear guidelines we can all follow. Some of their recommendations for farmers using pollination services include ‚Äú[using] only reputable, registered beekeepers who can show proof of ownership of their beehives, [encouraging] beekeepers to clearly mark their hives and equipment,‚Äù and ‚Äú[knowing] your beekeepers, their equipment and move-in/move out schedule.‚Äù

Whether the threat comes from people, birds or bears, prevention of predators is paramount. ‚ÄúThe bottom line is to be proactive‚Äînot reactive,‚Äù says Penn State Extension Educator Robyn Underwood.

This article originally appeared in the July/August 2022 issue of¬ÝHobby Farms¬Ýmagazine.