Protect Your Chickens Against These Common Predators

There are plenty of wild critters eager to make a meal out of your chickens, so get to know common predators and effective deterrents for each. 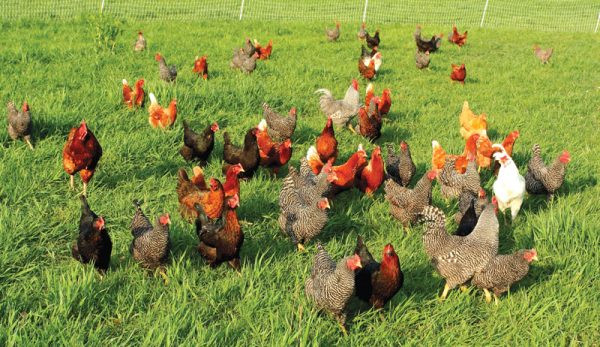 The benefits of free-ranging a flock are vast and varied, with the overall outcome that birds kept outdoors 24/7ãor at least for most of the dayãare more active and healthier than their coop-kept counterparts. If you choose to completely free-range your fowl, they must have the ability to shelter under structures. Chickens without access to safe housing are most at risk of falling prey to predators.ô

Chickens have a lot of predators, but the primary threats your chickens face will depend on what part of the country they call home. Hawks and other birds of prey, raccoons, foxes, weasels, opossums, coyotes, skunks, rodents and bears are just a few of the animals that consider your birds a tasty treaty.

Itãs important to remember that domestic dogs and catsãwhether your own or a neighborãsãalso pose a very real threat to free-range flocks.ô

It can be helpful to ascertain what predators put your chickens most at risk to determine the best course of protection. Local feed stores and other chicken owners in your area can offer insight into regional predators at threat to your chickens. If your birds are already under attack, noting the time of day they go missing, as well as where on the birdãs body the injuries can be found, can help to narrow down the instigator.ô

Birds of prey can be found all over North America. But how they threaten free-range chickens can differ by species.

Hawks and falcons will attempt to take birds during the day. Owls often attack at night. Hawks are persistent predators, killing just one or two chickens at a time, but returning repeatedly to an unprotected flock. Hawks typically decapitate chickens, eating the breast meat and the entrails. Owls can leave behind a pile of feathers and other inedible parts, but if itãs chicks theyãre killing, they may take the entire bird.

Once birds of prey have found your flock easy pickings, it can be difficult to rein them in. Many of these birds are federally protected, so shooting them or shooting at them to scare them away isnãt an option without threat of a hefty fine or even jail time.

Instead, use these tips to protect your flock from flying threats.

Let your chickens range where cover, such as bushes, trees or buildings they can get under, is readily available. Chickens often see attacks coming and will run and hide.

If your birds have an area in which they frequently pass their time, consider installing nettingãor even a solid roofãover the open area to limit their accessibility to hawks and owls

Put poultry to bed early. Owls hunt at night, so corral your flock in their coop before dusk.

Consider using scare tactics such as hanging reflective tape, old pie tins, CDs or shiny pinwheels so they spin and create bright flashes of light, deterring birds of prey. (Donãt use mirrors, as these could start a fire.) Note that each of these tactics might not work on all birds that threaten your chickens

Decoys such as scarecrows can also keep birds of prey guessing. These must be moved often or the birds will become accustomed toãand not intimidated byãthemô

Use various noisy solutions such as wind chimes or a radio to make even the most persistent hawk pause. Itãs important that (like the decoys) the sound be changed every so often so the birds donãt get used to it.

Utilize a chicken saddle designed to confuse aerial predators. This piece of equipment isnãt uncomfortable for your bird and wonãt scare flockmates, but it will give aerial attackers pause.

Read more: Got rats in the chicken run? Here’s how to get and keep rodents out.

Coyotes are active around-the-clock, but those that live closer to urban areas tend to be most active at night. A canine species that can weigh up to 50 pounds, coyotes are found throughout North America. Theyãre extremely capable of digging and jumping. Theyãve been known to scale fences well over 6 feet in height. Though coyotes can hunt in packs, they normally hunt alone when searching for smaller prey.ô

Ways to thwart coyotes from feasting on your feathered friends include the following.ô

Utilize trained livestock guardian animals such as dogs, donkeys or llamas, to protect your flock, both when free ranging and when in a coop. (The key word here is ãtrained.ã)

Keep chicken feed tightly sealed. Coyotes are omnivores and will eat everything from insects and plants to roadkill and livestock. Coyotes are attracted to smell, so removing chicken feed in the evening (from either coop or field) can be key to not attracting unwanted coyote attention.

Install ãcoyote rollersã on the tops of fences to prevent access to your flock. These contraptions roll when the coyote tries to push off of them, thwarting his efforts to get inside

If coyote attacks are your No. 1 concern (and not attacks from above), eliminate bushes and other areas where a coyote can hide while stalking prey.ô

Dig In: Digging is a coyoteãs preferred method of entry. To prevent access, install hardware cloth 2 feet under fences.

Place solar-powered visual deterrents around chicken perimeters. When activated, these emit bright red, flashing lights to scare predators away from your chickens.

Thereãs a lot of truth behind the saying ãsly as a fox.ã Fox attacks can be very difficult to prevent: They can dig under fences and squeeze through small holes, removing chickens with little to no evidenceãeven during the day.ô

If youãre unsure how the fox is getting access to your coop at night (or if youãre unsure of exactly whatãs stealing your chickens), it can be worthwhile to set up a trail camera to see exactly howãand whoãis getting in at night.

Found in pockets all over North America, each of these Mustelidae can wreak havoc on backyard flocks. All can squeeze through tiny openings in fencing and coops, and often will kill multiple birds in one break in. Frustratingly, though, they wonãt eat everything they kill.ô

Badgers in particular are skilled at digging and climbing, so itãs imperative you put your flock up at night and protect them from attacks that come from above and below. If badgers live in your area, try these solutions.

The ultimate ãteam player,ã raccoons are notoriously wily, often teaming up with others of their ilk to coordinate a chicken attack. Raccoons have five long digits with a claw at the end of each, making them particularly dexterous and deadly to chickens as they can easily open and hold locks and latches.

Raccoons are quite lazy by nature. Theyãre attracted to food but will find the easiest way possible to obtain it. Eggs and baby chicks are particularly vulnerable. To protect your flock, consider the following.ô

Skunks are known for their egg-sucking abilities. Theyãre also notorious for snatching eggs and chicks, and often injure any adult chickens that obstruct their rampage. In addition to their lethalness, their distinct odor makes for one more reason to keep them at bay.

To keep your flock safe, consider the following points.

Any animal that is hungry enough will work diligently to circumvent any deterrent you install to keep your flock safe. Knowing the predators in your area and preparing for their favored mode of entry will go a long way to helping keep your chickensô safe.ô

Springtime is synonymous with babies. As temperatures rise, days get longer and animals get frisky. Broody hens spend more time sitting on their eggs, and cheeping chicks start showing up in feed-supply stores. Itãs no surprise that spring is also the season when most people start their flocks. But a growing number of chicken-keepers are adding fall flocks to their farms.

Next spring, when other flock-raisers are just setting up their brooders and welcoming new chicks to the farm, the chicks you purchased this fall will already be laying eggs. You might also get more eggs from fall-hatched chicks.

The reason: Chicks purchased in the spring donãt start laying until the fall. Just as their reproductive systems kick into high gear, the days get shorter. This sends the signal that itãs time to slow down egg production through the winter.

In contrast, chicks hatched in the fall shift into maximum production in the spring, laying almost one egg per day (depending on the breed). If you get chicks in the fall, theyãre maturing through the early part of the winter and might put off laying a little bit longer.

But when they start laying in the spring, the prime laying season, they are going to be ready to go.ô

Adding chicks in the fall can also prevent you from keeping the coop lit for sustained egg production. Staggering your new additions in your flock by adding some chicks in the spring and some in the fall typically will provide year-round production without the added light source.