Baby chicks are prone to all sorts of illness, but harsh and expensive medications aren’t necessary to keep them healthy. Use these tips for natural prevention and treatment. 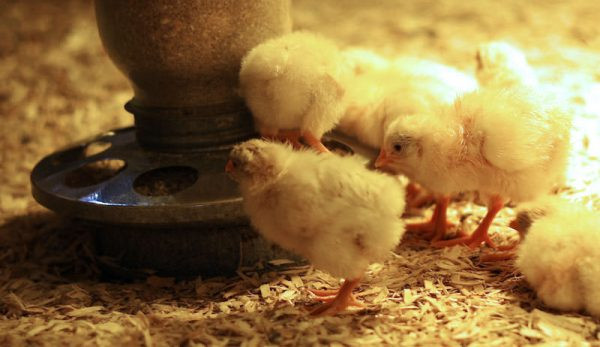 Buying chicks from a reputable feed store, breeder or hatchery and providing them a clean, warm brooder with fresh water and feed will usually result in healthy chicks, but sometimes things go wrong. Here’s a guide to seven common problems and how to treat them naturally—without antibiotics or chemicals.

1. Coccidiosis
This is the No. 1 cause of death in baby chicks and a highly contagious parasitic disease of the intestinal tract. Red-tinted, bloody stools and lethargy are common symptoms. If you suspect a chick has coccidiosis, separate it from the flock and feed equal parts chick feed and milk mixed with plain yogurt. This will cause runny stools, which will help to flush the parasite from the intestines. Sprinkle some probiotic powder into the feed to replenish good bacteria and feed some oregano oil and cinnamon, both of which act as natural antibiotics.

While medicated feed is available for prevention of coccidiosis in chicks, a natural option includes adding apple cider vinegar, probiotic powder and garlic to your chicks’ diet to build strong immune systems.

2. Marek’s Disease
This term refers to several highly contagious viral syndromes that cause tumors and/or paralysis in birds. Partial immunity is achieved by vaccination or allowing healthy chicks limited exposure to the virus, which resides in nearly every chicken yard. As a preventative measure, ensure the brooder is clean and help chicks build strong immune systems by adding apple cider vinegar, garlic and probiotic powder to their diet.

There is no treatment for Marek’s disease, but separating infected chicks and ensuring they continue to eat, drink and keep their immune systems strong is their best chance of survival.

3. Pasty Butt
This potentially fatal condition occurs when feces stops up a chick’s vent so it can’t excrete. More common in shipped chicks, pasty butt is often caused by stress or temperature fluctuations.

Prevent pasty butt in your flock by purchasing chicks locally or hatching your own, keeping your brooder temperature constant, and not allowing children or household pets to stress chicks. If you do notice your chicks have pasty butt, carefully clean the vent with a cotton swab dipped in warm water and then in olive oil. Cornmeal, raw oatmeal and probiotic powder added to the feed can help clear up the condition.

4. Stargazing
This vitamin deficiency leaves a chick unable to hold up its head or walk normally. Because stargazing is thought to be partially caused by a thiamine (B vitamin) deficiency, treatment includes adding brewer’s yeast to the feed. Massaging the chick’s neck carefully for a few minutes several times a day can also help.

5. Scissor Beak
Also called crossed beak, this is a deformity in which the top and bottom of a chick’s beak don’t line up properly. Most often caused by genetics, it will likely worsen over time. To prevent future cases, chicks with the condition, or hens whose eggs hatch chicks with scissor beak, shouldn’t be bred.

In chicks with scissor beak, file the beak with an emery board to allow it to close better. Moisten the feed and raise the feeder to help the chick eat more easily, and feed the chick separately to assure it gets enough to eat.

6. Spraddle Leg
When a chick’s legs slip out to the sides, making standing or walking impossible, it’s called spraddle leg. This condition is commonly caused by incubator temperature being too high or fluctuating too greatly, the brooder floor being too slippery or a vitamin deficiency. Prevent injury to your chicks by covering your brooder floor with rubber shelf liner or paper towels.

Wrapping an adhesive bandage or strips of vet wrap around the chick’s legs to stabilize them for a few days is usually the only treatment needed for spraddle leg. If you suspect a vitamin deficiency, a supplement, such as Nutri-Drench, is recommended.

7.  Respiratory Issues
Respiratory problems are common in poultry due to their elaborate respiratory systems. Symptoms include runny or bubbling eyes, coughing, sneezing or runny nostrils. Keep your chicks’ airways functioning by using large-sized pine chips (never aromatic cedar) as brooder bedding to cut down on dust, and use white vinegar and water to clean the brooder instead of bleach, which creates toxic fumes when mixed with the ammonia in chick poop.

Despite these potentially serious problems, most can be avoided simply by purchasing chicks from a reputable source and practicing good brooder management. Toss in a few natural supplements to aid in immune system strength and more than likely you will never encounter any of these issues with your spring chicks.