Protect Your Flock With Guard Donkeys

Kick up herd protection on your hobby farm with a guard donkey. 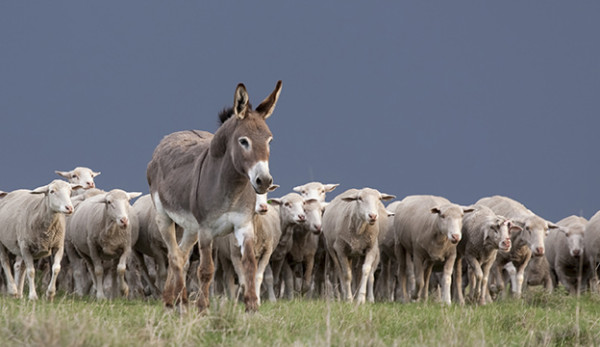 Coyotes and dogs had been a major problem at the University of Rhode IslandŌĆÖs Peckham Farm, home to a prize-winning flock of Dorset sheep. Then the university bought Bonnie, a guard donkey.

She came to the URI campus in December 2003 after a pack of dogs had attacked the sheep. Of the 26 ewes in the flock then, 17 suffered severe puncture wounds. One was killed, and six were badly injured, including one so seriously hurt she had to be euthanized a few weeks later.

In nearby Lebanon, Conn., Paul Tubey says he’s seen coyotes lurking in the woods surrounding his Beltane Farm, but the predators have stayed away from his mixed herd of┬ĀOberhasli and┬ĀLaMancha goats since he acquired a guard donkey.

In addition to dogs or coyotes, guard donkeys can also protect farm animals against foxes and bobcats, according to the Texas Department of Agriculture, but black bears, wolves and mountain lions might prey on donkeys.

“Donkeys rely predominantly on sight and sound to detect intruders,ŌĆØ according to a bulletin from the Ontario Ministry of Agriculture, Food and Rural Affairs. “When approached, sheep will tend to move so the guard animal is between the intruder and themselves. The donkeys’ loud brays and quick pursuit will scare away predators and may also alert the shepherd.

Usually, a donkey will confront the predator and run it out of the pasture.

“If the canines do not retreat quickly, the donkeys will attack them by rising up on their hind legs and striking with both front feet,” the bulletin says.┬Ā“A solid blow can injure, kill or at the very least discourage the predator.ŌĆØ

When a visitor brought a leashed dog to URIŌĆÖs Peckham Farm, Bonnie and Dee brayed menacingly as they charged to the pasture fence. Before buying a potential guard donkey, itŌĆÖs wise to test its reaction to a dog.

Like horses, each donkey is different from others, says Dave Marshall, a former farrier. During lambing season, he had to separate Dee from the sheep because the younger guard donkey was being impatient and rough with lambs.

“Bonnie, the older one, lets things happen as they happen,ŌĆØ Marshall says. “Dee is an enforcer. She wants everything to happen the way she wants it to happen, but lambs canŌĆÖt conform; they donŌĆÖt have that in their brains. They have no real ŌĆśflock sense.ŌĆÖ Dee canŌĆÖt put them together; one goes this way and another goes that way, so she tries to grab them.

Marshall says Dee will have an easier time controlling the sheep┬Āonce they turn 6 months old because the lambs will become part of the dynamic of the flock.

Where to Get a Donkey

Donkeys are often available at livestock auctions or by reaching out to donkey and mule breed associations.

Fred Launer, an animal-science instructor at URI, recommends buying guard donkeys┬Āfrom breeders who have selected stock specifically for the donkeysŌĆÖ herd-protection instincts. The donkeys might cost more, but itŌĆÖs a wise investment, he says. Dee and Bonnie came from guard-donkey breeders in Pennsylvania.

Some guard-donkey owners breed their own donkeys. The practice allows selection for donkeys with good guarding tendencies. In 2004, URIŌĆÖs Bonnie foaled Clyde, who after gelding, was sold to a nearby shepherd.

“The donkey should be introduced to the sheep as early as possible to increase the likelihood of the donkey bonding to the flock,ŌĆØ according to the Ontario Ministry of Agriculture, Food and Rural Affairs. “Getting the sheep and donkey to accept each other as ŌĆśflockmatesŌĆÖ is the first step in allowing the donkey to exhibit its true guarding instincts. Under ideal circumstances the jenny and her foal should be raised with the sheep. The weaned foal should then be left alone with the flock.”

Donkeys are very sociable animals, though, so many think that in order to effectively do their jobs, they need to work alone.┬ĀFarmers worry that if┬Āthe donkeys are allowed to mix with cattle, horses or other donkeys, then the sheep will be ignored. At Beltane Farm, however, Tubey had to buy a pony to be a calming companion for his donkey, a common and sound solution for donkeys that can seem to be stressed, says URIŌĆÖs Fred Launer.

“Annual worming and occasional supplemental feeding during periods of poor range conditions may be all that is required,ŌĆØ according to the Texas Department of Agriculture. “Water should be readily available and snow or ice should not be relied on for meeting water intake needs during cold weather. Do not allow donkeys access to feed containing Rumensin, urea or other products intended only for ruminants. Donkeys can benefit from vaccination against common equine diseases, such as tetanus and encephalitis. Veterinary care, hoof trimming and floating of teeth may be needed at times.ŌĆØ

Guard donkeys do not need special training, but they’re easier to handle after they have become accustomed to a halter.

If you think adding a guard donkey to your menagerie is in your future, use these tips from the Texas Department of Agriculture to find the best animal to fit your farms needs.