Protect Your Garden From Frost & Freeze

When temperatures in late spring and early fall dramatically take a downward tumble, protect your garden from freeze and frost with these tips. 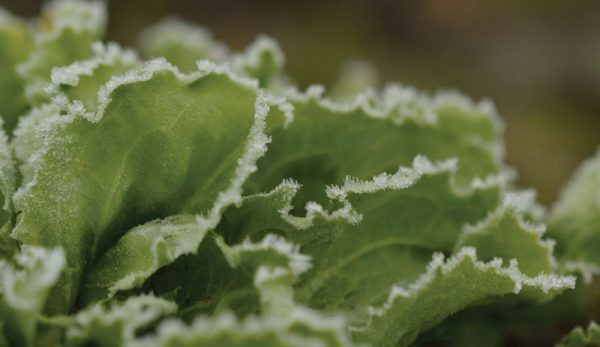 There are many challenges to growing your own food: Caring for your soil; dealing with pests and diseases; starting finicky seeds and plants; etc. Few, however, are as problematic‚ÄĒespecially for mid- to larger gardeners and food growers‚ÄĒas dramatic early and late temperature plunges.¬†

This past spring, a large swath of the United States encountered one of the most unexpected and epic weather events. (What else would we expect in 2020?!)

A solid two weeks after most place‚Äôs last spring frost date, a hard freeze fell upon a quarter or so of the country. For many, it was catastrophic‚ÄĒtotal to near-total losses of hundreds to thousands of plants.

For my family, it was a bit of an inconvenience but little more. Over the years, we‚Äôve learned how to deal with early and late cold. You just need to know what does and what doesn‚Äôt work to protect your garden from a freeze.¬†

There is no way to protect plants unless you have a way to enclose them‚ÄĒto make a microclimate. There isn‚Äôt really anything I know of on the market that beats floating row cover. It comes in a variety of weights and sizes and can be double (and even triple!) layered as needed.¬†

I really only see two drawbacks to the stuff:

You‚Äôll need to make sure areas where you use it are clear of hazards that could cause tears and other damage.¬†

You also need to have a good way to secure the fabric in place. Sand bags and similar soft materials are best‚ÄĒnot rocks, blocks or boards as many, including us, have tried with unhappy results. Put more smaller weights along the fabric (instead of fewer larger ones) to keep it in place. This reduces risk of tearing and creates a tighter seal around the enclosed plants.¬†

My second floating row cover tip? Keep it from directly touching the plants. Any place it touches plants in your garden is a place that plants may suffer significant freeze damage. An added bonus is that floating row covers offer great protection from some early season pests, such as flea beetles.

So you‚Äôll already be set up for your first spring pest cycle.

Many people have asked us if they can use blankets, sleeping bags, buckets, boxes or similar improvised protection for plants. My answer? Yes, you can. It‚Äôs really only viable on a small scale, though.¬†

We once helped a neighbor use boxes and buckets with a layer of old blankets and tarps placed on top to protect his small garden. It worked OK, but the labor was high, unlike with floating row covers.¬†

Now you have your first line of defense: the ability to create a miniature, protected climate underneath. So what‚Äôs next?

We took our most aggressive planting approach ever this past spring and had thousands of plants already in our high tunnel, including large numbers of exclusively warm-season crops such as peppers, tomatoes, cucumbers, zucchini and more. Many of these were 12 inches in size.

We put single or double row covers over the plants. But we knew many warmer season plants wouldn‚Äôt survive, even with that extra protection. They needed thermal mass.¬†

Thermal mass is just ‚Äústuff‚ÄĚ‚ÄĒwater, rock, soil, etc.‚ÄĒthat holds its temperature and helps stabilize the temperature of things around it. You can create thermal mass many ways.

It‚Äôs best, however, to bank thermal mass ahead of time. This is especially true if it‚Äôs suddenly dropping in temperature but otherwise warm heading into the weather change.

Three to four days before the front was slated to move in, we filled darkly colored barrels and totes. These we placed between plants and at the ends of rows. This gave time for the water in the totes‚ÄĒwhich is usually about 50 degrees F coming out of our well‚ÄĒto get up into the mid-60s.

That is a significant amount of additional cold buffer!¬†

Also, don‚Äôt neglect to ensure your soil has sufficient moisture. Dry garden soil will get cold fast during a freeze. (This is why desert regions are so hot in the day and often frigid at night!)

In the days leading up the cold front, we irrigated late morning to allow that water/soil to bank as much daytime heat as possible. We would also irrigate in small runs, letting the tripled-up lengths of hose preheat the very cold well water a bit before putting it into the soil.¬†

On the night of the front‚Äôs entry, we filled about 20 5-gallon buckets with warm (100-degree or so) water from our house. There were no showers for anyone that night as we drained the hot water heater. But for our most valuable and sensitive plants‚ÄĒpeppers and tomatoes‚ÄĒit was a small price to pay.¬†

All this thermal mass followed by row covers (one to two layers) paid off. Plants just 6 to 8 inches from protection paid the price and died back right to the ground with no hope of rebound. Not a single garden plant under cover suffered any freeze damage at all, except a few fennel whose fronds were in contact with the floating row cover.¬†

In many places in our tunnel and outdoors, we have heavy cover crops‚ÄĒusually clovers. Underneath these are a plethora of plants‚ÄĒbasils, cherry tomatoes, zinnias and a host of other ‚Äúvolunteers‚ÄĚ that we encourage and transplant to appropriate places at the right time or pot up and sell.¬†

One interesting thing we discovered was that plants under the clover, even very cold-sensitive garden plants such as basil and various flowers, were completely unharmed by the freeze. The cover crop was more than sufficient to blanket and protect the baby plants below.¬†

One other thing that has consistently helped our main growing space over the past decade is establishing wind breaks on the western and northern side. This protects our garden space against cold fronts and strong winds/storm fronts. It provides some relief and protection to the plants in our main growing space.¬†

We use elderberry. What else would you expect me, the author of The Elderberry Book: Forage, Cultivate, Prepare, Preserve to plant!? But many perennials are appropriate to help protect your annuals.¬†

Read more: Check out these tips for using trees as windbreaks on a farm.

Another option that also has worked well to protect the garden against a freeze is putting a few light bulbs underneath the row cover. In our experience, lower wattage bulbs, spread out more often, work better than just a couple higher wattage ones. This reduces the risk for fire and plant damage.¬†

You can combine light bulbs with a timer to cycle them on and off, too, for safety. It’s the same as what you might do in a well house that isn‚Äôt sufficiently insulated.

Absolutely make sure the bulbs are well away from the floating row cover (fire risk!) and a good distance from the plants. This strategy requires cords and other equipment and is really only suitable on a small scale. But it works well for water and for plants.

We were short on row covers because of how aggressively we had planted in the spring. So we erected a few low tunnels over our potato beds.

We planted the potatoes in three staggered plantings, so they varied in height from just popping up to a solid almost-a-foot tall. For all the plants, we heavily mulched as much as reasonable to provide additional protection and then made the low tunnels over the beds.¬†

It didn‚Äôt help at all. And all the taller potato plants suffered significant damage.

The shorter, mulched plants all did fine, with minimal damage to foliage tips right near the mulch surface. Perhaps row covers would have done better than the low tunnels for the potatoes. In previous years, we saw better results with such an approach.¬†

Lesson learned: Keep more floating row covers on hand than you think you may need. Because when you need it, you need it. And may not be able to get it. ¬†

Some weather events, such as hail and wind, can‚Äôt be stopped. For those instances, we always have some spare plants in reserve just in case earlier plantings are taken out by bad weather.

Proptek trays make having large numbers of plants in a small space easy and cost effective. Two trays can cover 200 or more plants and take up just a few square feet of space.¬†

Since some plants are quick growers and we were running short on row cover and totes and buckets to use for mass, we let a few quick-growing plants to their chances, such as cucumbers. All of these, even in our tunnel, suffered swift death.

John Moody homesteads in the hills of Kentucky and is the author of The Frugal Homesteader Handbook.¬† He is fortunate to have a great wife, Jessica, and five fantastic kids.¬† Learn more them at www.abbyselderberry.com and www.homesteaderhandbook.com.