An orchard full of mature apple trees is quite pleasant, but low-hanging branches can complicate or prevent mowing. A little pruning can make a big difference. 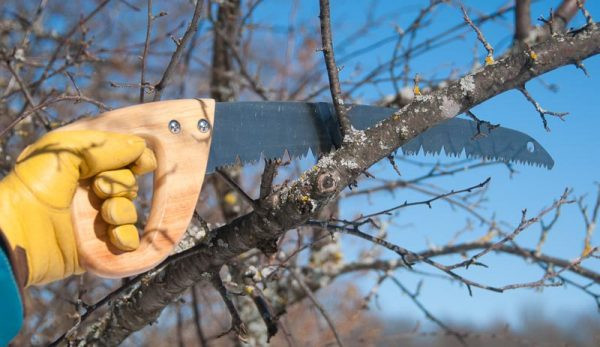 Thereâ€™s something very picturesque and pleasant about an orchard full of mature apple trees. Iâ€™m particularly fond of full-size, nondwarf trees that grow large with unusual shapes and lots of low, sweeping branches.

Of course, an orchard is most picturesque when the grass around and between the trees is carefully mowed and manicuredâ€”itâ€™s a lot more pleasant to pick apples in a yard-like environment than to pick them while tromping through grass thatâ€™s three feet tall.

Apples in the Way

Unfortunately, the way apple trees like to growâ€”with low-hanging branches that can come quite close to the ground when bearing full loads of fruitâ€”means that mowing your orchard can be a challenging task. Aboard a riding mower, youâ€™ll find yourself constantly ducking underneath branches. These can be so low that a riding mower isnâ€™t an option.

Instead, youâ€™ll have to carefully weave your way under the trees with something like a string trimmer, which can be quite difficult.

Iâ€™m generally fond of low-hanging apple branches (they make it easy to pick fruit by hand). Yet if trees with such branches are large enough, you should consider pruning off their lowest limbs. Then, your mowing job will be easier (and safer).

You donâ€™t even need much in the way of toolsâ€”a chainsaw is definitely overkill. A simple pair of pruning loppers for the smaller branches, plus a pruning saw for any larger ones, is probably all you need.

Suffice it to say, Iâ€™ve pruned many apple trees this way through the years. It can feel like a big mistake at the time (â€śLook at all these beautiful apple-bearing branches Iâ€™ve cut off!â€ť). But when youâ€™re done youâ€™ll appreciate having the tree in a more manageable state.

Truth be told, it really doesnâ€™t take much pruning to make a huge difference. Because theyâ€™re so shaded by the upper portions of the tree, large sections of the lowest branches are often dead anyway. You can quickly make a difference without cutting a single live branch. Furthermore, removing these dead sections can lighten the load on the live branches. It lets them spring back up a bitâ€”perhaps even enough so they no longer block or complicate your mowing.

Even if you do prune live branches, I say don’t hesitate. If you worry that it will dramatically change the tree’s appearance, never fear. I’ve actually found that the trees usually look much tidier and healthier after pruning the lower branches. Furthermore, you donâ€™t have to cut off entire branches if you donâ€™t want toâ€”they usually originate from higher up on the trunk and sag downward as they reach outward, so pruning the branches back to a point where they wonâ€™t get in your way is often all you need to do.

When itâ€™s all said and done, your orchardâ€”whether it comprises a single tree or dozensâ€”will present a much cleaner appearance, and the task of keeping it mowed will be delightfully simple. Just be warned: The branches grow back fast, and you might need to prune again in the very near future.