It’s finally cold enough that all the fruit trees in the garden, including the apples, have dropped their leaves, so I pruned my deciduous fruit trees today. 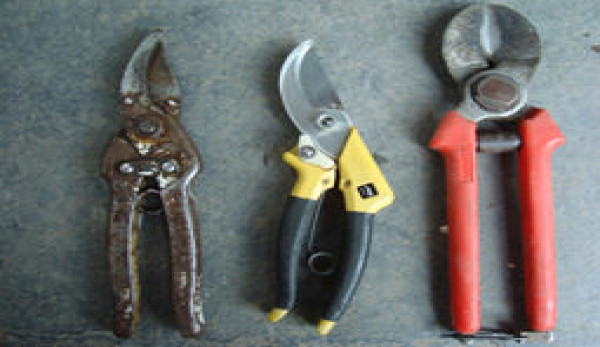 It’s finally cold enough that all the fruit trees in the garden, including the apples, have dropped their leaves, so I pruned my deciduous fruit trees today.

I only have seven trees, and they’re all just a few years old, so it didn’t take too long.  I’m still pruning these trees to establish a good shape, so I mostly just cut back long branches and eliminate all the crossing branches.

I also cut out any shoots coming from the base and most of the skinny branches, except those on the trunk, which I leave, thinking that these shoots will act as little pumps to help push water and nutrients up the trunk during the spring growth spurt.

When I finished pruning I put a layer of fire ashes and then a thick mulch of old leaves on top of the root zones, taking care to keep the mulch away from the trunks in order to keep the crowns dry.  Spring starts in March, so in late February I’ll scatter chicken manure pellets on top of the leaves to give the trees a wake-up snack.

I’m crazy about pruning shears.  At one time I had almost three hundred pairs and I spent a lot of time fixing up and finding parts for old and rusted shears.  These days I have perhaps two dozen pairs.

The photograph shows my current three favorite pairs.  On the left are my English Wilkinson Sword shears, which were the first shears I ever owned.  I bought them when I started working at a retail nursery when I was 14 years old, back in 1965.  These shears have seen a lot of use over the years but are still strong and sharp.

The middle pair are my super-sharp Japanese ARS shears.  I use these mostly for show-off work like bonsai pruning.  I also have two other pairs of ARS shears with slender blades that are good for the most delicate work.

The pair of shears on the right are my heavy duty Italian Manaresi shears that I use for pruning olives.  These shears have an unusual matching blade configuration and are incredibly strong.  I can cut tough olive branches up to about an inch and a half thick with these shears.

Despite my attraction to all these slightly exotic shears, I will admit that my most frequently used pruning shears are the American Corona pruning shears and edging shears that I keep up in the garden toolchest.  These twenty-year-old shears are the toughest shears I’ve ever encountered and will tolerate an amazing amount of abuse.

I’ve owned shears that have cost more than a hundred dollars (!), but these simple and relatively inexpensive Corona shears outperform anything for general work.

Some shears are sharper, some are stronger, and some are more aesthetically dazzling, but no shears I’ve ever tried are more rugged and durable than the Coronas.  The wire-loop handle locks need adjusting sometimes, but the rust is just a patina and the blades have never needed sharpening.

Being the pruning shear junkie that I am, I’ve also purchased several hundred pairs of cheap pruning shears.  There’s something about a pair of shiny new shears for sale at a discount center for only five bucks that I just can’t seem to resist.

Of course, that’s always wasted money, because cheap shears often don’t work well and they never last long.   On the other hand, quality shears are always worth the higher price because they work well and will last for many years.