Have Leftover Pumpkins? Use Them For Livestock Feed

Will you have extra pumpkins on your property? Consider giving them to sheep, goats, cattle or horses—and check with pumpkin patches for unwanted surpluses. 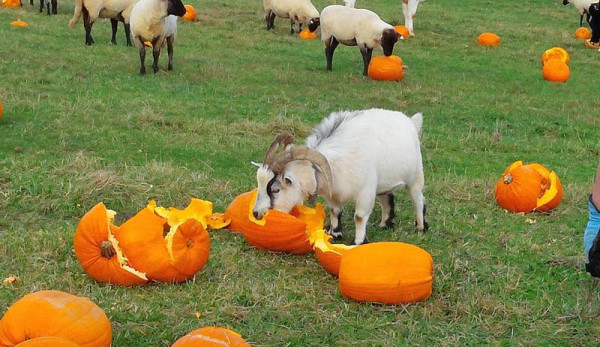 With shorter days, changing leaves and cooler weather in the fall also comes pumpkins. While these typically orange orbs are perhaps the quintessential fall decoration around home (and barn!) it can feel like a waste to throw them out at the end of the season. And what about all those unpicked pumpkins left in the field? Pumpkins are safe for livestock and are readily consumed. Here are some ways to turn leftover pumpkins into a nutritious feedstuff on your farm.

Pumpkins contain high levels of vitamins A and E as well as folate and fiber. Although they are mostly water (roughly 85 percent moisture content), they can make a reasonable supplemental protein source. Many livestock, such as horses, cattle, sheep and goats find them palatable. Interestingly, pumpkin seeds—which are not toxic to livestock and humans—contain a compound called cucurbitacin. This compound is present in many plant species and typically functions as an herbivore-deterrent because, in large quantities, it has a bitter taste. Anecdotally, there have been reports of cucurbitacin used as a natural dewormer in livestock. This was studied at the Delaware State University with promising results, although more investigation is warranted. Likewise, this compound is being studied as an anti-cancer agent.

Cattle will gamely munch pumpkins if put out to graze the growing fields after harvest. Cows have no trouble breaking open pumpkins and consuming the pulp. Sometimes the set-up will be just right, where a pumpkin patch is alongside a harvested cornfield. When grazed at the same time, pumpkin and corn stalks make a convenient diet for late fall and early winter cattle grazing.

With smaller cattle herds as well as sheep and goats, having leftover pumpkins delivered might work for your farm. Some pumpkin patches might have a surplus in late fall, which might also include some soft pumpkins or those with other blemishes. Don’t worry too much about a little mold—these livestock are well-equipped to pick through and be choosy about what they consume. If a pumpkin delivery sounds like it might work for your farm, start contacting local pumpkin growers early in the fall season; don’t wait until after Halloween or Thanksgiving to make that first call.

Horses also love the taste of pumpkin and might investigate a whole one if it’s thrown into the pasture. However, hastily consumed stems can be a choking hazard. For a quick and easy way to dispose of your jack-o-lanterns simply put the used pumpkin—minus stem (and any candle or wax inside)—into the pasture for an edible toy. For horses with a more refined palette, or those unwilling or unable to crunch through raw pumpkin, you can easily bake a pumpkin to soften it. To do so, simply preheat your oven to 400 degrees F and place the pumpkin (deseeded and with the top removed) in a glass casserole dish. Baking times vary based on the size of the pumpkin. A three-to-six-pound pumpkin usually takes 45 minutes to an hour become soft. After baking, you can either scrape the pumpkin flesh out and mix with your horse’s feed or slice the soft pumpkin up and offer pieces to your horse that way. Slicing the pumpkin prior to baking is also a way to reduce cooking time.

There’s really only one word of warning regarding pumpkin feeding to livestock: The seeds might very well pass through the animals’ digestive system unharmed, and if the conditions are right, you just might find yourself an unwitting proprietor of a pumpkin patch next summer!