Photo by Rick Gush This chicory plant, the puntarelle, grows all over in more temperate areas. This week will start a series of blogs on the many varieties of edible chicory. Currently grown more in Europe than the United States, chicories are opportunity plants for small farmers in Italy. This is because it’s inevitable that […] 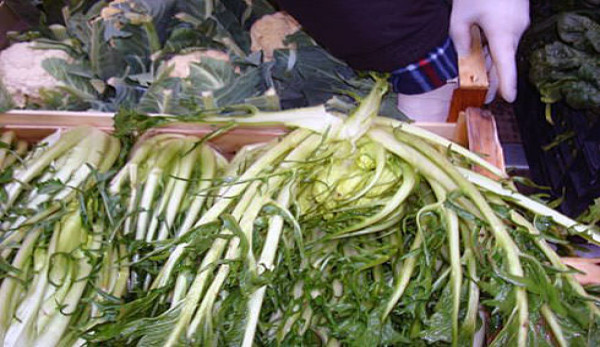 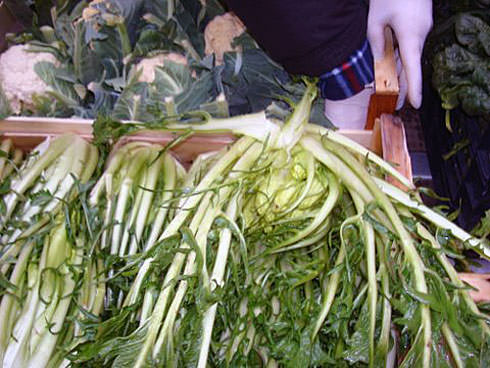 This chicory plant, the puntarelle, grows all over in more temperate areas.

This week will start a series of blogs on the many varieties of edible chicory. Currently grown more in Europe than the United States, chicories are opportunity plants for small farmers in Italy. This is because it’s inevitable that a market for locally grown chicories will grow.

The photo today is of my friend, Rosanna, showing the puntarelle type or, more specifically, the puntarelle di galatina. The edible parts of these particular chicories are the crisp little green shoot buds that are in a mass in the center of the cluster. They taste like a very crunchy lettuce or thinner, lighter-tasting celery. The Italians often call them chicorium asparago, because the individual shoots sort of resemble the tip of an asparagus.

I’ll admit confusion, but I don’t think the correct botanical name is c. asparago, but more likely cichorium intybus puntarelle di galatina. This is misleading because this plant is nothing like the wild, blue-flowered chicory cichorium intybus that now grows along roadsides in many temperate areas.

There’s a really good reason why chicories aren’t widely grown in the states: A lot of chicories need to be forced in some way in order to produce the desired result. In the case of the puntarelle, the plants are field-grown as a fall crop and then dug up at the beginning of winter. The plant cores and roots, which are all a bit round, are trimmed of its leaves and stems and then replanted in boxes or other structures that are then kept in the dark for several months. During this time, a lot of pale, new shoots, called puntarelle, develop on the plant core.

Any small farmer wishing to cultivate an exotic crop such as puntarelle should take themselves to school on basic chicory-forcing techniques, such as those used to produce the classic red-leaf chicories of Italy and the crunchy, pale Belgian endives.

Forced chicories are a new frontier for Americans, who have traditionally been generally less patient gardeners. Fortunately, many of us are starting to realize how much fun it can be to grow some of the more demanding crops like the forced chicories. Sure, there are a few niche places where the fall and winter weather is cool but always a few degrees above freezing. Puntarelle grown in these areas don’t need the same type of forcing. These days, the puntarelle we see in the market here in northern Italy comes from around Bari, which is further south on the peninsula. I’ll bet gardeners in San Diego, Calif., could grow great puntarelle most years.

I eat puntarelle as a salad ingredient. After I extract the tender tips, there are a lot of greens to throw into the compost. For stateside growers, I would suggest the chicory catalogna galatina seeds from Gourmet Seed, and the cichorium intybus puntarelle di galatina from the great French seed company B & T World Seeds.