This bike/solar-car hybrid is revolutionizing the way people travel in the bike lane. 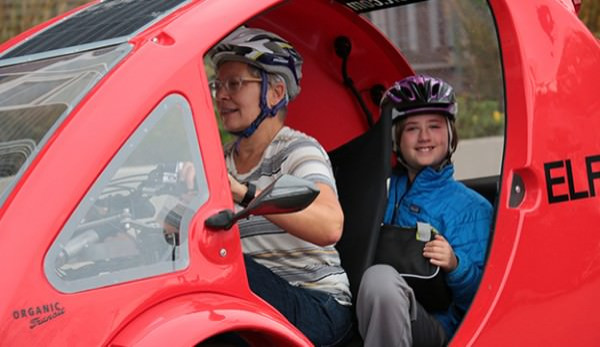 Itâ€™s a bicycle, itâ€™s a carâ€”itâ€™s both! At 160 pounds, this sporty little machine, dubbed the ELF, can carry an adult, two 8-year-olds and a half-dozen grocery bags. It can reach 20 mph with electric assist, and 30 mph with pedaling. The ELF is the only hybrid vehicle of its kind in the world. Produced in Durham, N.C., and starting at $5,500, itâ€™s build mainly of recycled and upcycled parts. Organic Transit founder and CEO Rob Cotter tells us about his creation and how this smallish vehicle is making a big impact.

Why did you create the ELF?

Iâ€™ve been messing around with human-powered vehicles and ultra-efficient vehicles for a very long time. About six years ago, I was consulting on New York City bike sharing. It dawned on me that if New York City was putting in 300 miles of bike trails that there is a market for a more practical, user-friendly, safer, more utilitarian type of bike that gives good weather protectionâ€”one where they can carry their kids, pick up their groceries, get up the big hills and arrive at work without being all sweaty.

And why the moniker “ELF?â€ť

I broke it down into “Electric, Light and Fun.â€ť And an elf is like a little critter in the background, helping out and working efficiently after hours. I liked the idea of the ELF being a helpful companion with our work and play.

How is the ELF good for the environment?

The ELF is a solar and pedal hybrid vehicle powered by you and the sun. Itâ€™s really the most efficient vehicle on the planet, getting the equivalent of 1800 mpg. I like to say itâ€™s the ant of vehicles, carrying three to four times its own weight. One ELF used year round has the potential to mitigate six tons of CO2 from entering the atmosphere each year. That’s like planting 900 trees every year.

Plug an ELF into a standard electrical outlet, and it will be fully charged in 2Â˝ hours. Or it takes seven hours to solar recharge the ELF. In fact, if you live in a sunny area, the ELF makes more energy than it uses.

About 80 percent of the bulk materials come from within two hours of our production facility in Durham, N.C. We donâ€™t paint anythingâ€”no paint on the vehicle and no volatile organic compounds in the environment.

How does the ELF do with inclement weather?

We have a lot of them riding around in Canada year-round. They do very well on snow and ice. We sell them with carbon studded snow tires. People put trailers on them. Up in Canada, a guy uses his ELF to pull his snow-blowing equipment for his business.

Who is The ELF best suited for?

I originally created The ELF for the urban farmer. The ELF can carry up to a 550-pound payload! One of the things we thought about was “Who will be the people that want to buy this?â€ť We thought that they will be the people that really appreciate buying local, organic food, concerned about the environment, and looking to get off of fossil fuels and save money.

The ELF really is for anyone who wants to get somewhere and wants to be healthier and have a healthier environment. On a recent survey, we found 70 percent of people are using it for commuting and errands. Most are using it to replace their second car.

The ELF ended up filling a niche beyond what you imagined. What happened?

We knew the ELF could be good for people with certain disabilities, but we never knew how popular the ELF would become to certain populations. There are a whole group of people that donâ€™t have the ability to travel like we do. People with epilepsy, autism, PTSD or legally blind people. They can see, they just donâ€™t see well enough to have a driverâ€™s license. All these people are saying, “I can use an ELF.â€ť The youngest person owning an ELF is 14 and the oldest is 94.

In the same way the Volkswagen Bus represented a culture, a lifestyle and a certain freedom, weâ€™d like the ELF doing that, too.

(Note: The ELF is legally a bicycle in almost every state and operators do not need a driverâ€™s license.)