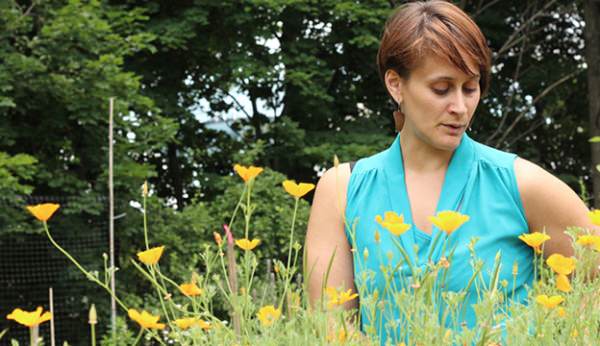 Has the cold weather got you feeling run down? Treat yourself to a cup of urban-farm sourced tea. Healcrest Urban Farm, Maria Graziani’s 1½-acre herb and fruit farm in Pittsburgh’s East End, is the source of sustainably raised, “luxury” teas and also serves as a community green space and healing space. So if it’s warm comfort that you’re after this season, this farm is sure to have something that will soothe your body and soul.


Tell me more about your urban-grown teas.

Maria Graziani: We grow medicinal/culinary herbs that are often used in nutritional teas. We have nine different tea blends containing herbs that can be grown in the Northeast. When each herb is ready to harvest, we collect, garble, lay out in a large dehydrator or on racks in the greenhouse, dry, crush, and store for later use in blending tisanes.

We use only organic farming methods—never pesticides or artificial fertilizers—and we buy only organic and often heirloom seeds. We also practice seed-saving.

MG: Healcrest Urban Farm is located in a residential space that was pieced together from several abandoned lots. The majority of these lots were purchased between 2004 and 2006, and the remaining are used in partnership with the City of Pittsburgh and the Urban Redevelopment Authority here in Pittsburgh. We sit on the crest of a hill overlooking the East End and have an amazing tree border and mini-forest to break weather and create a biodiverse space for plant and animal habitat.

What inspired you to start Healcrest?

MG: In 2004, I had completed my certification in Herbal Medicine and had finished interning with three different small farms in the Pennsylvania/West Virgina area. I was excited to start working with plants and create products for optimal and natural health. The land that makes up Healcrest was blighted and abandoned at a time in Pittsburg when urban farming had not taken off and our city had a severe vacant lot issue. Land was inexpensive, and I wanted it for the purpose of gardening instead of the usual housing development. We began in 2005 cleaning the soil while teaching people across the city of sustainable farming methods and local food production.

The way you financed the project was unique. Tell us more about how you raised capital to launch your business?

MG: We bootstrapped (used our own capital) for many years, and in addition, we partnered with many nonprofits to provide job training for youth and after-school and summer-camp programming. We still do this today, but now have the additional revenue that comes in from product sales, farm tours and events.

In 2012 we went for our first Kiva Zip loan, which was 100-percent crowdfunded with 0-percent interest. We got that initial startup loan to really take our herbal teas and farm-fresh ice pops to markets. We have since had two Kiva Zip loans and have been successful in repaying those.

In the last year, we were accepted into an incubator, which is a future equity partner. As we work with them, we’re getting more savvy in our fundraising efforts.

When do you sell the most teas?

MG: Most of our sales are not contingent on season because we’ve started focusing on a wholesale market. We are first an urban growe; second a local food producer; and last but not least, a catalyst farm for workforce development and local-food aggregation. We immediately process our herbs and fruits into dried tea blends, ice pops, and herb-infused syrups or shrubs. Unlike CSA or market farmers, nothing is wasted—it’s sold throughout the year to cafés, small grocers, event spaces and more.

MG: Healcrest Urban Farm was founded and is run by women. I have my MBA and am a single mom dedicated to building the local-food economy in Pittsburgh. My business partner, Dana Launius, has been a tireless worker and contributed greatly to building the vision of Healcrest. She’s also heavily invested in preserving much-needed green spaces in the city of Pittsburgh.