You can learn a lot about your rabbit by observing its daily habits. Use this key to interpret everyday rabbit behaviors. 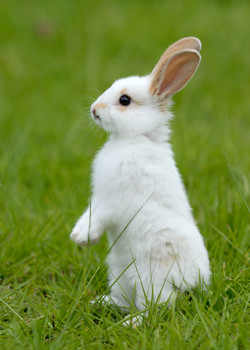 If your rabbit stands on its hind legs, it’s on the lookout for a predator.

Rabbits are prey animals, so when interacting with them, you have to do a lot to earn their trust and respect their boundaries. Rabbits will communicate pleasures and displeasures through their action. Take your cue from the common rabbit behaviors listed below:

Rabbits might give a loud thump with their hind legs as a warning to stay away from their territory. A rabbit will also display this behavior to show its displeasure of something. Be cautious if your rabbit is repeatedly thumping its feet toward youāit may thump so hard it breaks a hind foot.

In the wild, rabbits dig a small burrow into the ground or underneath an object to nest and raise young. This behavior carries over to the domesticated rabbit. Give your rabbit an area where itās encouraged to dig or scratch.

This natural behavior, in which the rabbit holds very still while standing on its hind legs, means itās looking for a predator.

When you observe your bunny rubbing its chin and cheeks against something, itās marking its territory. This is a common behavior of many animals, and thereās no reason to discourage this, as only other animals can detect the smell.

Spraying urine is predominantly a male rabbit behavior, and itās done to mark areas within a territory, to court females (in which the female is sprayed with a small dose of urine) or to reinforce hierarchy. Spraying can become an issue if your rabbit is not neutered.

Some neutered male rabbits may continue to spray. If this happens, try to discern what triggers the behavior, and make changes to its environment accordingly.

Intentionally urinating or defecating can be a rabbitās way of marking territory or showing disapproval.

Growling is a rabbitās way of showing displeasure. Excessive growling from a normally tame rabbit should be taken as a sign that something may be wrong physically or emotionally, so get a complete veterinary checkup.

Grunting is primarily a mating behavior and is often accompanied by the rabbit circling its object of desire.

Licking is a sign of affection. Stop the licking if it becomes more intense and leads to a bite, which is indicative of hormonal behavior.

Nudging has various meanings depending on the rabbitās temperament. It may mean the rabbit wants attention, wants to be left alone or wants something else. You can distinguish over time what this behavior means for your rabbit.

Jumping and Kicking Feet Together

Rabbits jump and kick their feet together to display their pleasure and enjoyment.

Cowering in a corner is a sign of fear. A rabbit is a prey animal and, until it is comfortable within its environment, it will likely show signs of fear from time to time. Offer your rabbit a hiding spot (such as a cardboard box) within its hutch to give it a sense of security. Rabbits will also cower when ill, so consult your veterinarian if cowering is habitual or an irregular behavior.

There are two reasons a rabbit may grind its teeth. True grinding of the teeth may be a sign that the teeth are overgrown and need to be groomed by a veterinarian. Chattering of the teeth, on the other hand, is a sign of trust and relaxation. Take notice of your rabbitās food consumption, fecal droppings, teeth and overall behavior to determine whether itās grinding its teeth or chattering.

Sometimes excessive sneezing may occur due to illness, improper housing or as a reaction to cage material. Daily hutch cleaning will ensure that a bunny is not sneezing due to poor hutch husbandry. If the sneezing continues, visit the veterinarian.

About the Author: Michelle Karras worked for 18 years in affiliation with Narnia Pet Behavior in Naperville, Ill.