Rabbit In The Garden? It’s A Common Frustration

A rabbit in a garden is a discouraging day of destruction waiting to happen, so farmers can sympathize with Mr. McGregor from "The Tale of Peter Rabbit." 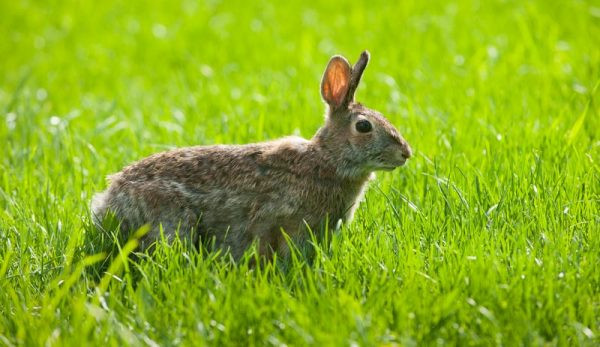 In The Tale of Peter Rabbit by Beatrix Potter, farmer Mr. McGregor is forced to defend his garden from the titular bunny. He gives chase until the anthropomorphic critterâ€”stuffed full of vegetablesâ€”makes a narrow escape (minus his jacket and shoes).

Readers might be relieved by Peter Rabbitâ€™s survival. His blatant disobedience in visiting the garden notwithstanding, no one wants to see him wind up as the main ingredient in one of Mrs. McGregorâ€™s rabbit pies.

But hobby farmers might be more inclined to sympathize with the plight of Mr. McGregor. A rabbit in a garden is a discouraging day of destruction waiting to happen.

A Woeful Tale of the Rabbit in My Garden

Recently, Iâ€™ve been feeling a lot like Mr. McGregor. Thereâ€™s been an explosion in the wild rabbit population on my farm, triggered by at least one spring litter.

The baby rabbits have started venturing out. Oneâ€”weâ€™ll call him Peteyâ€”is growing a little too bold in his exploration of the farm.

About one week ago, Petey managed to slip into my farmâ€™s main garden through an open gate. Inside, he found a world of lush plants quite unlike the surrounding yard, complete with a thick patch of raspberry bushes convenient for hiding out of sight and out of reach.

Thereâ€™s no telling how long Petey would have stayedâ€”and how much he would have eatenâ€”if he hadnâ€™t been noticed immediately. A grand chase involving multiple people ensued. It ended with the little rabbit unleashing a frenzied dash out of the raspberry patch, out of the garden and across the yard to hide under a nearby shed.

We hoped this would mark the end of Peteyâ€™s garden adventures. But unfortunately he hasnâ€™t given up quite so easily.

Over the course of several days, he was spotted repeatedly near the garden fence, perhaps searching for a way inside. Each time, we chased him awayâ€”sometimes to the safety of the shed, and sometimes into patches of tall grass.

Of course, we didnâ€™t really think Petey would find his way back into the garden, at least as long as we kept the gate shut. The garden is surrounded by two types of fencingâ€”eight-foot welded wire to keep out deer, and two-foot hardware cloth to keep out smaller animals like rabbits and squirrels.

The hardware cloth is bent outward at the base and buried slightly to discourage critters from digging underneath.

But Peteyâ€™s efforts eventually paid off. One afternoon, there he was, sitting in the middle of a walkway even though the garden gate had been shut. Realizing heâ€™d been spotted, Petey retreated back to the raspberry patch, and considerable rattling of the bushes was necessary to flush him out.

He finally reappeared at the back of the garden. Then Petey sprinted to a corner andâ€”poof!â€”seemingly ran right through the hardware cloth to escape.

Read more: These 10 quick-growing vegetables will give you an early, rewarding harvest!

It turns out thereâ€™s a hole in the hardware cloth where it bends at ground level. Itâ€™s not an easy hole to notice, but Peteyâ€”in his evidently diligent analysis of the gardenâ€™s defensesâ€”managed to uncover this hidden entrance.

The good news is, the young rabbit left the garden undisturbed, so he must not have been inside for long. And suffice to say, the hole has since been blocked. This will hopefully prevent Petey from taking up permanent residence in the raspberry patch (which should probably be moved outside the garden).

Otherwise, Iâ€™ll just have to keep pursuing Petey in the same manner as Mr. McGregor, who must surely rank as one of the most relatable â€śvillainsâ€ť in literature!