Use a Trap to Protect Your Chickens From Raccoons

Raccoons are common poultry predators. Here are tips on how to trap and handle these masked bandits eager to get at your flock. 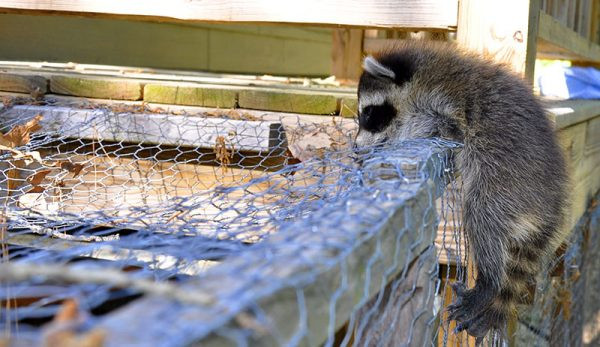 To me, it came down to a lack of communication. My oldest, Michael, had let his brother Jaesonâ€™s Lemon Orpington hen, Lemon Cupcake, out to forage and explore. Michael assumed that Jaeson locked her back up for the night. Jaeson assumed that Michael had. The next morning, I woke up to Jaeson pounding on my door, frantically asking if Iâ€™d already let Cupcake out for the day. I’ve not gotten dressed that quickly in years. Dashing outside, I found Michael running back and forth between our coops, searching for the missing hen. I found Jaeson standing beside her empty tractor. And I found a flurry of feathers inside the tractor, just outside its open door, and then nothing, other than one bloody-tipped quill angling towards our house.

Michael left shortly after; he had a plane to catch. Jaeson began walking the far perimeter of our property, which adjoins extensive state woodlands. Meanwhile I followed the direction that bloody feather seemed to indicate: toward the south side of our front yard. Noticing a swath of grasses bent away from our house, I headed there and followed a narrow path through the meadow that led to a tall tree with a very wide base. I approached and my heart fell. There was what remained of Cupcake, splayed out in the large, natural bowl formed by the treeâ€™s limbs.

My first thought? A fox. Foxes tend to quickly kill and carry their back to their dens, sometimes leaving a scattering of feathers in their wake. This, however, was a raccoonâ€™s den. The locationâ€”and the way the bird had been eatenâ€”made it clear this was no fox.

In all our years raising poultry, we have lost only two birds to raccoons, once because of a broken vent cover and once because of bad luck. We diligently defend our livestock against the many natural predators in our areaâ€”opossum, coyote, fox, feral cat, weasel and hawkâ€”but the raccoon is by far the most prevalent. Even in our townâ€™s suburbs, raccoons are common prowlers because of poor property-management practices. Many friends who have small flocks have purchased live traps to protect their birds but are unsure how to use them, or what to do afterward. If a raccoon has targeted your chickens and youâ€™ve bought or borrowed a live trap, here are several steps to take to safeguard your birds.

Raccoons are omnivores, eating many things including fruits, sweets, fatty meats and, as many homeowners can attest, garbage. We have tried a variety of bait in our live trap with varying degrees of success. Least successful were our leftovers, which did not attract a single raccoon. Overripe raspberries and bananas had about a 50 percent success rate. We always hit our mark, however, when we switched to wet cat food.

The vessel used for bait is also important. At first, we simply put the food on the floor of the cage. This made cleanup very messy. We then tried a bowl, which was often upended, bait splattered all over and trap sprung but empty. Unwaxed paper plates turned out to be the best option. They’re flat, so raccoons have full access to the bait, and cleanup is usually a simple matter of tossing the plate onto our compost pile.

Consider your location. If you live in an urban or suburban location, your raccoons are probably accustomed to the presence of humans. If you live in a rural area, however, the animal might shy away from human scent. To avoid sabotaging your trap, wear gloves and avoid wearing perfume, cologne, deodorant or other fragrances.

If you know the location of the raccoons den, determine the route the animals would take to reach your coop. Place the trap between 10 to 20 feet away from your coop along this route, with the opening facing the raccoonâ€™s den. If you do not know the raccoons’ home point, examine your yard thoroughly for raccoon scat and tracks, then place your trap in an area where these are plentiful. If you see no signs, then place your trap about 10 feet away from your coop, the opening facing away from the structure. Make sure there are no tools, equipment or other obstructions that would cause raccoons to shy away. You might consider weighing down the top of the trap with bricks to keep the raccoon from knocking it over. Make certain you place your trap at dusk, because raccoons are nocturnal. This prevents accidentally trapping daylight animals lured by your bait, such as your neighborâ€™s cat.

When approaching a full trap, by all means wear gloves. Whatever animal is inside will undoubtedly be agitated, frightened or otherwise disturbed and might try to bite you. Always use the handle to move the trap, never the trap itself, and keep it at a safe distance from your body. Move the trap well away from your coops and runs; the presence of a predator can alarm and upset your flock. Consider covering the trap with a tarp or a blanket, to mask the presence of the predator and also to keep the raccoon calm while you move it.

How you handle your trapped raccoon depends on your local ordinances. For specific details regarding raccoon management, contact one or more of the following:

In my family’s experience, releasing raccoons does not work. Several years ago, before releasing four raccoons into state woodlands 15 miles away, we tagged the back of their necks with nontoxic paint to identify them if they came back. Every single one of them came back within a week. Two of them did not survive crossing our rural route; the other two were trapped again. This time, and from then on, we do our best to ensure they wonâ€™t threaten our flocks or cause my sons any more heartache.