Farm founder Stephanie Webb reveals all about how egg color genetics work, as well as why she loves getting rainbow eggs, at her Dallas-based venture. 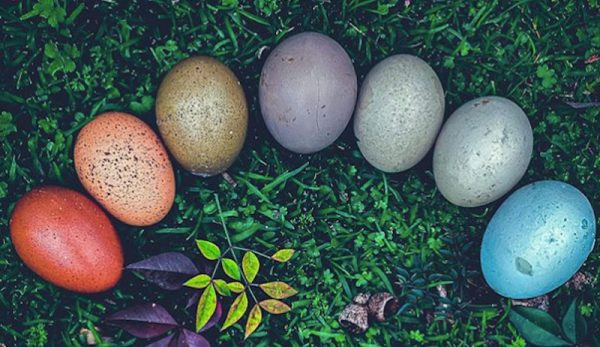 South Wildwood is an urban homestead that houses chickens with a talent for producing rainbow eggs. The Dallas-situated venture is the brainchild of Stephanie Webb, who remembers her grandfather always having a chicken catalog around the house while she was growing up.

“They had a small little chicken house that they kept here in Dallas that was still here when we moved here in 2015,” Webb recalls. “My husband integrated my papaw’s nesting boxes into the coop he built. ItŌĆÖs pretty special.”

We spoke to Webb about the rewarding nature of raising chickens and how being around poultry can be a stress reliever. We also got into how egg color genetics work.

I donŌĆÖt know who needs to hear this but: STEP AWAY FROM THE SNACKS! . It was me ?? I needed to hear this. @iamcountryside #countrysidethemeoftheweek is #payingitforward and friends, this is what IŌĆÖm passing along to you today. . Anyone else feeling like the #quarantine15 is about to sneak up on you if you donŌĆÖt shut the pantry door!? Just me? ?

What about caring for chickens on a daily basis? Webb says that “it’s as demanding as you make it be.”

She adds that when working in an urban setting, “I think someone can absolutely make it work with a good system in place that streamlines their workload. Things like automatic doors and feed auto-delivered take a lot of your workload and makes it automated.”

The Joys of Raising Chickens

We came home yesterday to a surprise new arrival. Our sweet little bantam, Betty(named by our electricians) had hatched a single fuzzy white chick. SheŌĆÖs already proving to be a great mama but not as open to me coming close to her babe as our other girls are. ThatŌĆÖs ok too. . I canŌĆÖt help but think of all the mamas out there praying for the right words and right actions while we all navigate new and unknown waters. Remember, there is not one single way to be a perfect mom but a million ways to be a good one. The best thing you can do for your babies right now is let go of the fear and stress. Soak up the slow down. Reevaluate what is important. They sense what is flowing out of you so let what is flowing out be peace. Then, wash your hands??

“For us, itŌĆÖs definitely not just knowing where our food comes from but also how it was treated,” says Webb when asked about the most rewarding aspect of adding chickens to your homestead.

“[It’s] shortening your supply chain. It gives you a much bigger appreciation for the work that goes into what is sitting on your plate.”

Webb adds that she appreciates how her children “are being raised with this level of responsibility.” She adds that “with the changing times, I think it is so important to have some level of self-reliance.

“ItŌĆÖs better to know how to and be able to before itŌĆÖs a necessity.”

The Wonderful World of Rainbow Eggs

Embrace whatever season of life you are in. Even if itŌĆÖs in the waiting. Remember: God wastes NOTHING. ŌĆó The strength, resilience, and faith that grow within you in hard times are all qualities you will use to fulfill the calling God has on your life. He promises to make something beautiful out of the storms of your life. ŌĆó . No RAIN, No RAINBOWS ?

If you check out South Wildwood’s Instagram account, it’s a given that the array of striking rainbow eggs will catch your eye.

“IŌĆÖm loving the grey tones some some of our girls lay,” says Webb, citing her current favorite shade of egg. “ItŌĆÖs like a new surprise every day when you check the nesting boxes.”

ŌśĆ’ĖÅIt is GORGEOUS here in Dallas today! Sun is shining and we are headed to our second home, the ballpark, for our oldest sonŌĆÖs game. If we arenŌĆÖt working on the house or garden or taking colorful egg pics with our little clinger by our side…thereŌĆÖs a good chance you will find us thereŌÜŠ’ĖÅ . . WhatŌĆÖs on the Saturday agenda in your neck of the woods? .

Wondering exactly how you can produce such a range of different colored eggs?

As a basic explanation, Webb says, “Blue eggs deposit color in the actual shell, whereas with brown eggs coloring is painted on the outside. In the case of our Olive Eggers, it is a blue egg layer with two blue genes bred with a dark brown egg layer. When you take the blue egg and paint the outside with the dark brown, that is where you get the olive colored eggs.”

In short, Webb says that “the more paint, the darker they get.”

WeŌĆÖre gonna need to check your bags maŌĆÖam ?? @Southwildwood citizens on patrol at your service.

Weighing up the pros and cons of adding some chickens to your property? Webb says that you shouldn’t overthink it: “As long as you understand that it is a life and they are a commitment, take the plunge.”

Webb adds that the benefits of raising chickens are multiple.

“Sitting on our back patio and watching our girls forage and relax is the best stress reliever,” she says. “It’s right up there with gardening. I havenŌĆÖt found one chicken person that doesnŌĆÖt agree, too.

“If you havenŌĆÖt tried fresh pasture-raised eggs before and are still on the fence, give them a try, then see if youŌĆÖre still torn. YouŌĆÖll never want to go back. No comparison.”