How to Raise Crickets for Chicken Snacks

You can buy crickets at bait stores or pet-supply retailers, or you can grow your own. Here's what you need and how it works. 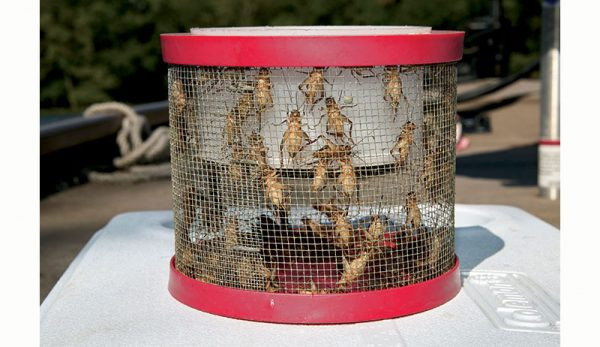 Our chickens love to eat crickets, and my wife and I love to watch the cricket match in the pen. The crickets bounce around while the hens snag them like fielders would go after ground balls. Thatâ€™s the fun part. Getting the chirping gray crickets (Acheta domesticus) takes a small effort if you want to buy them, a bit more effort if you want to grow them. It all starts with fishing.

I love to eat fish, though it has been decades since Iâ€™ve done any actual fishing. Nonetheless, I still keep a cricket bucket rolling around the floorboard of my pickup because I do stop at bait shops. If youâ€™ve never had the pleasure of going fishingâ€”an excuse to do almost nothing, reallyâ€”then you might not know that a cricket bucket can hold dozens of crickets, also referred to as live bait. It has a solid plastic bottom, wide as a cereal bowl, but the round sides are made of something like window screen so the crickets can breathe and you can see them.

The cleverly designed top is a bit like a one-way valve. Itâ€™s open so you can reach a hand in to catch a cricket, but thereâ€™s a flange inside the opening, like a collar, that keeps the other crickets from climbing out. Itâ€™s clever, simple and cheap. At country stores, you can buy these buckets for a few dollars in various bright colors. I picked up a used one for 50 cents at a yard sale. (I probably could have had it for a quarter, but the folks selling it looked to be having a slow Saturday.)

When I stop at a country store for an afternoon snack (for me) and buy a couple of dollars worth of crickets (for the hens), the owners are always tickled to hear where theyâ€™re going.

â€śSo the fish have nothing to fear from you?â€ť one smiling vendor once asked me.

Sometimes, I watch the bait shop worker catch the crickets so I can get an idea of how theyâ€™re being raised. The odor isnâ€™t real strong or terrible, but letâ€™s say that people without a sense of smell could do well as cricket farmers. Sometimes, a few thousand crickets are being raised in an old, repurposed waist-high drink cooler or ice cream freezer with an open top. If youâ€™ve ever wondered what happens to these cold, heavy, humming machines when their compressors go, well, now you know. They sometimes become budget baby-cricket incubators.

Look into one of these contraptions, and youâ€™ll notice crickets flinging themselves in every direction. It looks like popcorn popping. Then youâ€™ll see that some are hiding and staying still; perhaps they are resting or dying of old age if sales have been slow. In the incubator, crickets can find lots of places to rest and hide among sheets of egg crates and paper-towel tubes.

When I get home and walk into the hen pen, the chickens get very excited. Providing our hens live bugs is part of our enrichment program. They enjoy any worms or grass-hoppers that we toss their way. But they sure love them some crickets.

Inside the pen, I reach into the bucket and toss a few around to get the hens running around pecking crickets off the ground and off each otherâ€™s backs. Then I put the cricket bucket down on its side and let the girls at it. Being able to see and hear the crickets but not being able to get at them through the screen confuses them at first, but they eventually get the idea.

Buttercup, our Buff Orpington, is dominant, so she has the first go. The others get their licks in as well, poking their heads into the bucket and coming out with a juicy, crunchy prize.

Start Your Own League

I donâ€™t run by bait shops very often, though, so I might set up a trap in the crawl space of our house to catch those common and annoying camel crickets (Ceuthophilus maculatus) during summer. I figure a big jar with some dribs of overripe fruit should catch a few for our enrichment program. They look pretty crunchy and full of chitin and protein, too, like a gray cricket.

What camel crickets really like to eat are dead bugs. Maybe Iâ€™ll give them some loaded paper flytraps as feed to get their numbers up and then trap the camel crickets with sticky traps.

Of course, if youâ€™re squeamish about catching camel crickets or you donâ€™t live near a bait shop, you can buy crickets at any pet-supply store that sells them for feeding reptiles. Hens wonâ€™t know the difference.

So if you want to add gray cricket-raising to your homestead, here are a few tips.

After about two weeks youâ€™ll have eggs in the soil. Keep it moist with a mister so the eggs donâ€™t dry out. Add another container of soil to the first box, so you can transfer the first egg/soil container to another cricket box. Without adults around, they can develop and hatch after two weeks without being eaten. Keep moving egg/soil containers to one or more new boxes to increase your cricket population.

At about a month old, crickets are big enough to feed to your chickens. But theyâ€™ll live and reproduce for about three months. After your store-bought crickets have produced several thriving generations, start volunteering the oldest ones for your cricket matches. Simply put the container in the pen, open the lid and let the games begin. When all the crickets have fled the container, retrieve it and restock it with an egg/soil container from one of the younger generations and let the cycleâ€”and gamesâ€”continue.