Raise Ducklings Alongside Your Chickens

If those adorable ducklings at the farm-supply store have been calling to you the past several years, maybe it's time to take the plunge! 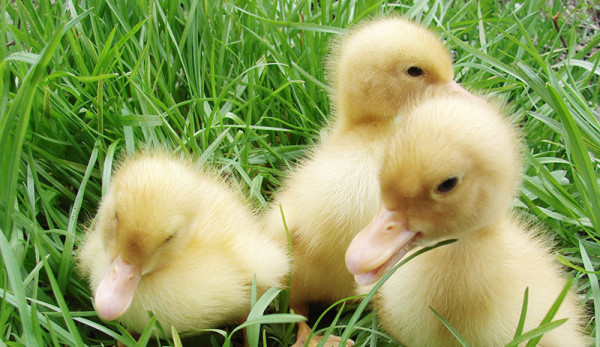 Almost a decade ago at the feed store while we were picking out a batch of baby chicks to bring home to our farm in Virginia, my husband spotted a bin full of peeping yellow ducklings. ‚ÄúWe‚Äôll take two of those, too,‚Äù he said. After being assured by the store owner that raising ducks was just like raising chickens, we headed home, confident that I could raise them successfully because I had raised chickens as a kid, growing up across the street from my grandparents‚Äô farm.

However, in a matter of days, I quickly learned that not only do ducklings grow faster and need less heat than chicks, they also have slightly different feed requirements and enjoy playing in their water, leaving the chicks wet and chilled with nothing to drink. But after quickly separating them and brooding the two groups each in their own brooders and reading up a bit on duck care, I learned that it‚Äôs entirely possible (and simple) to raise chickens and ducks together.

If you already raise chickens and are thinking about adding some ducks to your flock, it‚Äôs very likely that with a few minor modifications, you will have a duck-friendly setup in no time. Generally, adding a few ducks can be as easy as … well, adding a few ducks.

If you already have chickens, you know that adding a new flock member takes time and patience. Chickens take their pecking order very seriously and view newcomers as threats to their places. They will bully, injure or even kill a new chicken that is added without giving everyone time to gradually get to know each other. New birds should also be quarantined for at least 30 days before being integrated into an existing flock for biosecurity reasons, to be sure they aren‚Äôt sick or going to pass something infectious onto the others.

That said, I have added new ducks to my flock without any ‚Äúgetting to know you‚Äù period.
Ducks don‚Äôt seem to worry too much about any kind of pecking order and welcome newcomers quite easily, and I think the chickens instinctively know that ducks are not a threat to their pecking order. My chickens have never seemed concerned about sharing space with ducks or vice versa. I‚Äôve had flocks that included roosters and drakes along with my female chickens and ducks, and I have never had any issues whatsoever introducing a new duck.

Ducks also aren‚Äôt as susceptible to many of the various respiratory or infectious diseases that chickens are, so the worry about them transmitting anything to your flock is greatly minimized. I still recommend erring on the side of caution, though, so separate new ducks for at least a week or two just to be sure they‚Äôre healthy and let them get used to their new home slowly. Keep a close watch at first when you do mix the two groups to be completely sure there won‚Äôt be any bullying, pecking or feather pulling, but after that, you shouldn‚Äôt have any issues between them.

The one exception could be adding a new drake, aka male duck, to a flock with an existing drake, because sometimes fighting over females can ensue, so always keep a close eye any time you add male ducks. Also, ducklings should never be added to a flock of grown ducks until they are nearly full grown to prevent accidental trampling or drowning.

As for sleeping quarters, ducks are perfectly happy bunking with chickens in their coop. Duck don‚Äôt roost but instead nestle on the coop floor at night. Straw is the preferred bedding for ducks. Being hollow, it holds warm air inside the shafts, keeping the ducks warm while they sleep. Ducks can share your chickens‚Äô nesting boxes if they are at ground level; otherwise, ducks will be perfectly happy making their own nests in a corner in the straw. Another benefit to adding ducks to your coop is the added body heat they‚Äôll provide through cold winters.

I, however, prefer having a separate house for my ducks. Ducks are more active at night than chickens are, and I imagine the chickens get a bit annoyed with having their sleep interrupted. Also, because ducks sleep on the floor, they will sometimes decide to nestle under the chickens‚Äô roosts, which can get a little messy, as I‚Äôm sure you can imagine! (Blocking off the area under the roosts or using poop trays or hammocks can help with that, though.) Ducks are also more cold-hardy, so windows in a duck house can usually be left wide open year-round, as opposed to just cracked open a bit in a chicken coop.

Ducks create lots of moisture when they sleep, so whether they have their own house or if you do let them bed down in your chicken coop, be sure your coop has plenty of ventilation. If you see condensation on the inside of the windows or the coop walls, you need even more ventilation to let the excess moisture escape to prevent respiratory issues or frostbite. All windows and vents should be covered with 1/4- to 1/2-inch welded wire, as minks, rats, weasels, snakes and other predators are just as interested in your ducks and their eggs as they are in your chickens.

One caveat I should make about ducks is that I never leave any feed or water inside their house day or night. They will make a huge water mess, which can potentially lead to moldy or mildewed litter and feed. The wet feed will just attract rodents and flies and all that wetness can lead to respiratory issues or worse in your flock. Removing the water from the coop requires also removing the feed because ducks need water to swallow their feed and can choke if they have access to dry feed without having any water to wash it down.

Chickens and ducks can eat the same feed. For a fully mature flock, any regular layer feed will be fine for your ducks. Adding some brewer‚Äôs yeast to the feed will provide the ducks the extra niacin they need for strong bones, and it‚Äôs beneficial to chickens as well. Without supplemental niacin, ducks can develop leg issues. Too much protein can also be a problem for ducks that tend to put on weight easily and grow quickly, though, so cutting their feed with some raw oats can help reduce the protein levels a bit, and chickens and ducks both love oats.

Because ducks will go back and forth between their feed and water, taking a bill full of feed and then swishing it around in the water, lots of feed will naturally end up there. One way to prevent this is to move the feed a few feet from the water.

Another effective way to reduce the feed waste is to add a bit of water to the feed, so it‚Äôs moistened and the ducks won‚Äôt be as likely to feel the need to moisten it themselves. Either way, gravity feeders will get clogged up by ducks, so using a regular feed tub works better. Stoneware casserole dishes or sturdy bowls are also good choices for duck feed.

While I offer my chickens and ducks the same treats, ducks seem to prefer slightly different ones. Many types of treats are enjoyed by the chickens and the ducks, including mealworms, cooked spaghetti, watermelon and cucumbers, but the ducks seem to prefer leafy greens, such as kale, spinach and all types of lettuce, while the chickens lean more toward seeds, such as sunflower, flax, pumpkin and sesame. I always make sure to offer a variety so everyone can choose which to partake in.

Like all other living things, ducks need access to fresh water, but this is one area where chickens and ducks differ slightly. Ducks can empty gravity containers or nipple waterers in minutes and, in fact, very much enjoy doing so. Additionally, ducks have trouble getting their bills into the relatively narrow reservoir of most chicken drinkers. I recommend instead using large tubs for their water so they can dunk their entire heads. Ducks do need to submerge their heads in water to keep their eyes and sinuses clean, and they love fishing food and treats out of the water, too.

When you raise ducks, the water will never be crystal clear. Ducks muddy up water faster than you can dump and refill it. It‚Äôs just something that you‚Äôll need to resign yourself to. But as long as the water is fresh each morning and the water tubs are scrubbed regularly to remove any algae or bacterial buildup‚ÄîI just use white vinegar, water and a stiff scrub brush‚Äîyour chickens won‚Äôt mind sharing the duck water, even if there‚Äôs a bit of feed or mud in it.

Adding a few ducks to your chicken flock isn‚Äôt difficult, and your reward will be slug and grub control, delicious fresh eggs and hours of entertainment watching the undisputed clowns of the barnyard.