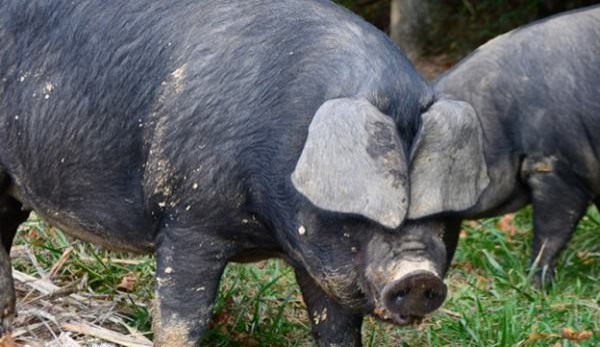 Youâ€™ve heard of pigs in a blanket and a hog on a spit. Pork with real flavor, though, comes from pigs in a woodlot. Turned out to roam a forested area with proper oversight, pigs can root up invasive plants, devour flora and fauna, and rejuvenate a woodlot ecosystem. This time spent outdoors feasting on varied foraged items changes the flavor and texture of the meat, making woodlot pork a whole new dining experience.

Pigs are hearty animals and can thrive in an outdoor setting when given shelter from the elements (anything from a four-sided barn to a covered stack of straw), a fence to keep pigs in and predators out, a water source, and nutritional supplementation. Heritage-breed pigs, such as Large Blacks, Herefords and Gloucestershire Old Spots, are often found in outdoor production systems across the U.S.; however, Putnam County, W.V., Extension Agriculture and Natural Resources agent Chuck Talbott says quality woodlot pork is less a question of breed than it is of diet: “All of the muscle and fat is influenced by diet.â€ť

Thatâ€™s where woodlot foraging comes in.

While pigs are rooting up invasive plants, breaking down rotting logs and aerating the soil, theyâ€™re also gobbling down nuts and fruits dropped from the trees. Some years, oak trees in your woodlot will be abundant in acorns; the next year, it might be walnuts or persimmons. No two groups of woodlot pigs will produce identical-tasting pork.

“Every three to five years is a [particular fruitâ€™s or nutâ€™s] bumper crop, and youâ€™ll have some hit-or-miss years in between,â€ť says Talbott, who raises Large Black-Ossabaw/Eurasian Wild Boar crosses with his partner, Nadine Perry, at Black Oak Holler Farm in Fraziers Bottom, W.V.

The need for quality eats in the forest limits the timeframe for producing woodlot pork, too. Autumn, of course, is when trees drop their leaves and fruits, but other parts of the year, pigs might not find much value among the trees. Talbott keeps his pigs on pasture year-round, moving them to woodlots at the end of August and taking them in for processing at the end of October and into November. He says it takes a minimum of six weeks for a pigâ€™s diet to influence the meatâ€™s flavor. Before they even get to the woods, Talbott ensures they have a good fat structure because that is where the forage-influenced flavor will really be noticed.

Thereâ€™s no published stocking rate for keeping pigs on a woodlot. Because the amount of forage available depends on the year, effective woodlot management requires that a farmer monitor the condition of the area and the available forage.

As helpful as pigs can be in managing invasive species, they can also be destructive if left to root and trample one section of land for too long. Just as you rotate your crops, you might have to rotate your pigs throughout the autumn or from year to year. Woodlot rotation also reduces parasite load and gives the woodlot a chance to recover and regrow.

“Have a goal in mind before turning the pigs into the woods,â€ť says Pete Lammers, PhD, assistant professor of agriculture in swine nutrition and management at Illinois State University. “Watch the pigs and their habits, limit their access, and pay attention to what is happening to the trees you want to keep. They can and will destroy the root system of very mature trees if not controlled. I would strongly advise anyone thinking about introducing pigs into their woodlots talk with a local forester about how pigs may impact tree health and plant-species mix before doing so.â€ť

Nutrient management is also a consideration of woodlot-kept pigs. In a pastured system, pigsâ€™ waste fertilizes the next forage crop, but in a woodlot system, trees cannot use the nutrients as quickly, and there is more danger of nutrient runoff into streams and drinking water. Monitor the amount of waste and the remaining groundcover so woodlot-kept hogs do not become environmental hazards.

“If you have a bare spot, itâ€™s very important that you have a buffer for runoff,â€ť says Niki Whitley, animal science specialist at North Carolina A&T cooperative extension.

At the same time, bare spots are important because pigs need to have an area in which to wallow. If there is not already a low-lying wetter area in the woodlot, make one.

“If you donâ€™t decide where you want the wallow, the pigâ€™s going to do it,â€ť Whitely says, and it just might make one that goes right under the fence.

Keeping pigs contained can be challenging, largely because of their keen intelligence. While you might use electric fencing to break up your woodlot into paddocks for rotation or to keep groups of pigs separate, a woven-wire fence is recommended for the perimeter of the lot. In their “Fencing Pastures and Drylots for Hogsâ€ť fact sheet, the Alabama Cooperative Extension suggests a minimum fence height of 40 inches with an electric strand running along the bottom inside fence to prevent pigs from digging out. Your pigs will need to be trained to electric fencing, and you must have the means to power it around the clock. To make paddocks, one electric strand at 12 inches or two strands at 10 inches and 18 inches will do.

“Thereâ€™s no reason for them to go anywhere if they have food and water and benevolent caregivers,â€ť Talbott points out.

Keeping predators out of the woodlot is just as important as keeping pigs in. This is where the woven-wire perimeter fence is especially useful. Talbott says dogs are the largest problem in his area and recalls hunting dogs running his pigs through the fence and down the road last year. Coyotes and other predators can be trouble if you have sows with litters, but they are less of an issue with finishing pigs. In some parts of the U.S., feral hogs are a big issue. They carry disease that could be passed on to domesticated pigs, and if theyâ€™re able to get into your woodlot, they can breed your sows.

With pig escape a real possibility, check on your herd several times per day; Talbottâ€™s pigs come when called. If your woodlot is small enough or you know the pigsâ€™ favorite hangout spots, you might not need that level of conditioning.

Developing a feeding routine will help you keep tabs on the pigsâ€™ whereabouts, too. While pigs will find tasty treats in the woods, they need grain supplementation for a balanced diet. Talbott gives his pigs free-choice access to a 16-percent-protein feed ration that includes barley and soy.

“Pigs are non-ruminant animals. They grow fastest when they are fed easily digested starches and sources of protein,â€ť Lammers says. “This is why corn and soybean meal is usually the starting point for pig diets. Pigs will grow well on nuts if there are enough available for the whole growing period of the pig; berries are fine but not very nutrient denseâ€”too much waterâ€”and usually too ephemeral to be considered anything more than a treat for the pigs in most cases.â€ť

Water is an essential element of your hogsâ€™ diet, as well. Hogs should be fenced out of waterways and ponds to reduce the pollution caused by their waste. Be sure they have some source of waterâ€”whether from a hose, a movable water-storage tank or buckets hauled inâ€”because if theyâ€™re left without, they might go in search of it.

A lot of pastured-pork information is available online and in books. Woodlot production is similar but has its own challenges, and there is far less information specific to raising hogs in this system. If keeping pigs in a woodlot appeals to you, seek out others in your area who are already doing it and talk with your cooperative extension agent for any research that can be helpful to your enterprise.

Get more help raising pigs for pork from HobbyFarms.com: