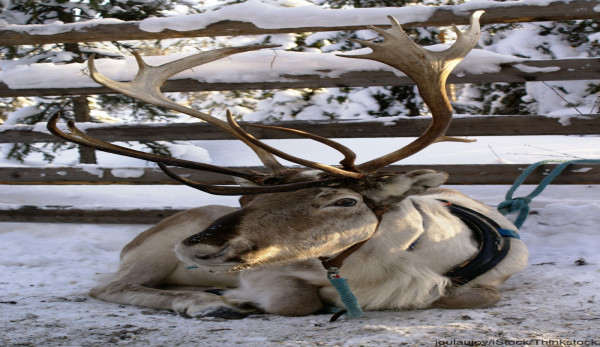 Some reindeer are domesticated and others aren’t. There are large populations of wild reindeer in Norway, Finland, Siberia and Greenland. Scientists think reindeer were domesticated 5,000 to 7,000 years ago somewhere along the Russian-Mongolian border, where they were probably used as decoys to attract wild deer so that hunters could kill them. Domesticated reindeer also provided meat, milk, tallow, sinew for sewing, and hides for fashioning blankets, clothing and footwear. Ancient reindeer herders used trained reindeer to ride and pull sleds. Reindeer domestication eventually spread throughout Russia and Scandinavia, but reindeer didn’t arrive in America until the 1890s.

The first domestic reindeer in North America came to western Alaska from Siberia. During the mid-1800s, Russian whalers decimated sea mammals along the Bering Sea coast, so native people were starving because they had no food to eat. In 1892, Captain Healy of the U.S. Revenue cutter Bear and Dr. Sheldon Jackson, a Presbyterian minister and the U.S. Commissioner of Education in Alaska, worked together to import 171 reindeer and five Siberian reindeer herders to tend them and teach Alaskan natives how to raise reindeer. By the 1930s there were about 640,000 reindeer in Alaska. Reindeer were especially prized during the Alaskan gold rush, when their meat brought high prices and reindeer were used to pull miners’ sleds. Reindeer even helped deliver the mail; the first postal reindeer route was established in 1899.

Reindeer are cool animals. I bet if we didn’t live where it’s so hot our Mom would buy some! Reindeer weigh between 180 and 600 pounds. Both sexes have antlers but males’ antlers are much bigger and more impressive that those of female reindeer. In fact, reindeer have the largest antlers relative to body size of all living deer. Reindeer bucks shed their antlers in December or January after rut, but does shed them after giving birth, through early spring.

You could raise reindeer if you want to! Some people raise them for their healthy meat. According to the University of Alaska, reindeer meat is high in protein (22 percent) and low in fat (3.5 percent) compared to leanÂ beef (19.2 percent protein and 9.5 percent fat). A typical young reindeer yields 120 pounds of tasty meat.

However, most American breeders raise and train reindeer to take part in Christmas events like parades and “Meet Santa” photo ops. Christmas-tree farms sometimes keep reindeer as attention-getters, too.

The beauty of reindeer is that handled from birth, does and castrated males are very docile. They’re easy to contain in normal small farm situations and don’t require expensive handling facilities. They’re easy to train to lead and to pull sleds.

TheÂ Reindeer Owners and Breeders Association website is a good place to learn about domestic reindeer and to locate responsible breeders who sell healthy animals. Another good resource is “Reindeer Roundup,” a 198-page bulletin published by the Reindeer Research Program, University of Alaska Fairbanks. Check it outâ€”you can download it for free!