Glenn Wagner returned to raising beef cattle after trying a few other farming ventures. Here, he shares his advice for getting started with stocking cattle. 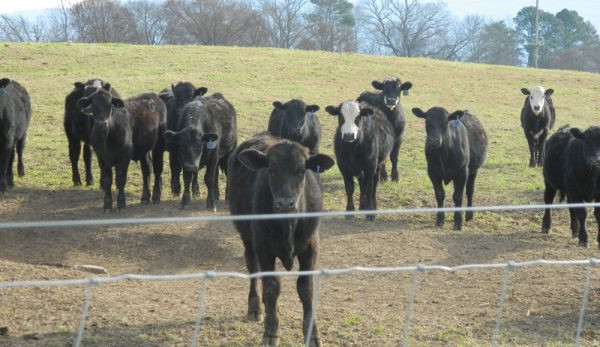 Glenn WagnerÔÇÖs farm has adjoined my familyÔÇÖs for decades. His father, Jack, raised beef cattle. But GlennÔÇÖs inspiration to farm came from something outside of agriculture.

ÔÇ£I started back in high school when I needed some money to take those girls out,ÔÇØ he says, with a laugh. ÔÇ£I canÔÇÖt remember when I didnÔÇÖt farm.ÔÇØ WagnerÔÇÖs first farming venture came with feeder pigs.

After two decades, as that market evolved, too, Wagner also left behind this enterprise.┬á

Next, he added Bermuda grass, selling hay along with chopping silage and rotationally grazing it first for his dairy heifers and later for his beef herd. Wagner was highly successful at raising Bermuda grass, at one time he was a leading producer in the Southeast, but the Bermuda grass stem maggot brought this chapter to a close.

As he transitioned from one enterprise to the next, Wagner took stock of the fact that he still had paddocks set up for rotational grazing. It was then that he decided to focus on raising beef cattle.

WagnerÔÇÖs goal, with any of his farming operations, has extended beyond his passion for agriculture.┬á

Wagner transitioned to raising beef cattle. He steadily worked toward his goal with the knowledge and skills acquired from his dairy heifer enterprise in genetics, feeding, nutrition and raising healthy cattle.┬á

Wagner now has two herds, with one calving in the spring and the other in the fall. He sells his fall calves in the spring while his spring calves go into his stocker herd.┬á 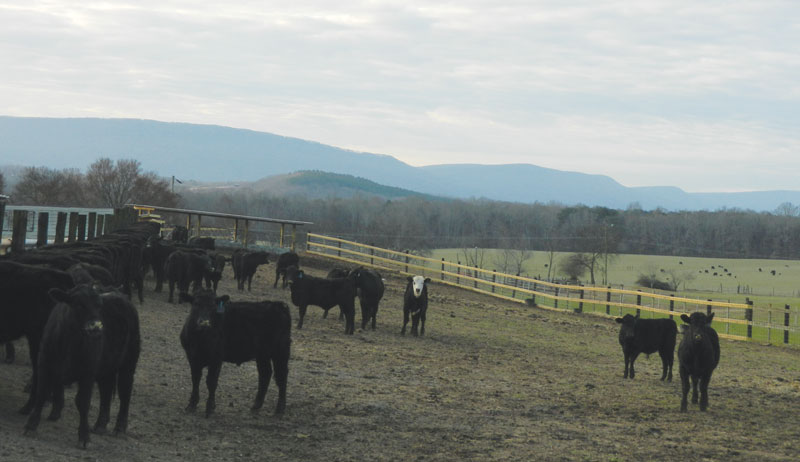 When & Where to Buy

As mentioned, some of WagnerÔÇÖs stocker calves are produced from his herd. The majority, though, he purchases. He recently expanded his operation and currently keeps some 280 calves.┬á

Because of the lack of grass availability due to his cow-calf and other farming operations, he purchases his stocker calves in October from a weekly sale. These are the cheapest calves. He finds good availability because the farmers selling them donÔÇÖt want to carry them through the winter.┬á

Wagner acknowledges that there are different schools of thought as to the best weight and time of year to purchase feeder calves. Unlike their lighter counterparts, heavier calves, such as those in the 600-to-700-pound range, can be difficult to put more weight on. On the other hand, younger calves just weaned and small can quickly become unhealthy.┬á

As for the best time of year to buy calves, it can be more favorable to purchase calves in the spring rather than the fall due to the availability of grass.

The calves that Wagner buys in October will weigh between 400 and 450 pounds. If heÔÇÖs still buying in November, those calves will be from 500 to 550 pounds. HeÔÇÖll have 30 to 40 of his spring calves of the same weight that he puts in with those that he purchases.┬á

This strategy allows the calves to be a uniform weight, around 750 to 800 pounds, at the time of sale. As an aside, calves raised for the freezer are heavier still. Though larger calves will also work, the ideal weight for a freezer beef is 1,200 pounds.

Read more: Learn how to choose cattle for your own homegrown beef.

As for color, Wagner prefers black calves. ÔÇ£You can buy nonblack cattle cheaper, and they grow off good,ÔÇØ he says. ÔÇ£But when they come in the stockyard, they put them in a different pen. The Angus people have a good product, but they also have good marketing. So the [black] calves will bring more per pound.

OK, you have decided the ideal weight, time of year, and sale (or sales) at which you will buy your calves before bringing them home. Now it is time to begin thinking about their health care needs.┬á

ÔÇ£When you bring feeder calves in from the stockyard you need to have somewhere to doctor them and put the sick ones,ÔÇØ Wagner says.┬á

Stress and exposure to other cattle at the stockyard often sets up disease processes. Wagner says that it takes about a five-week period to get them ÔÇ£straightened out.ÔÇØ His favorite time to raise them is after that five-week period has passed. Then, the calves are at their healthiest and they begin to gain about 2 1Ôüä2 to 3 pounds per day.┬á

Many of the calves Wagner buys are bulls. Though not always, he says that on average bulls are 10 to 15 cents cheaper than steers. To get the numbers he needs, Wagner buys bulls and steers. Bulls can be focused more on reproduction than eating, tend to be more aggressive, can potentially breed any heifers you are feeding out and arenÔÇÖt accepted by feedlots.

Therefore, they must be castrated. If you donÔÇÖt have the time or are uncomfortable with this process, buy steers.┬á

Though Wagner doesnÔÇÖt have many, heifers are also an option. ÔÇ£Heifers donÔÇÖt convert feed as well because they cycle,ÔÇØ he says. They donÔÇÖt put the weight on like a steer. Nor do they, generally speaking, cut out as well at the slaughterhouse.┬á

ÔÇ£But you buy them cheaper, and you sell them cheaper,ÔÇØ he says. Availability can also make it more feasible to put together a group of heifers. ÔÇ£Heifers will also run around when they cycle. If you are going to raise heifers, you need to raise only heifers. If you mix them, they can run the weight off [of all of the calves in the group],ÔÇØ Wagner says.

Once home, the process of working the beef cattle begins. ÔÇ£The first thing we do is vaccinate and castrate,ÔÇØ Wagner says. He uses an intranasal vaccine against IBR, BVD and PI3. 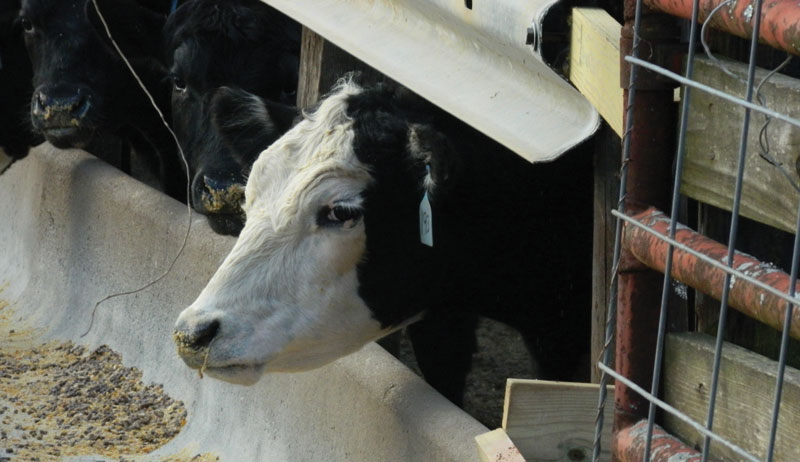 Wagner feeds corn that he raises on his farm, corn gluten or whatever protein source that is readily available. ÔÇ£ItÔÇÖs been difficult to get corn gluten or soybean meal or distillerÔÇÖs grain,ÔÇØ he says.

Feeding a 14 percent ration is what puts the gain on the calves. ÔÇ£You have to get them accustomed to eating corn [gluten],ÔÇØ he says. ÔÇ£It doesnÔÇÖt smell as good as the distillerÔÇÖs grain, but it has some molasses in it. Once they get accustomed to eating it, they do well.ÔÇØ┬á

Considering feed options, Wagner says that soybean meal has the disadvantage of being expensive and you have to be careful of overfeeding corn. Otherwise, he feeds his calves at about 1 1Ôüä2 percent┬áof their body weight.

Weight, vaccines, sex of calf and other considerations aside, your needs and resources from grass and space to finances will all play roles in determining the number of calves you should buy.┬á

Handling facilities, such as a chute and head gate, are key for the calvesÔÇÖ and farmersÔÇÖ safety. A sorting area to separate sick or varying sizes of calves is also nice. Otherwise, something as simple as feed and water troughs or buckets and electric fencing is all that is necessary.┬á

Wagner recommends keeping new calves in a small pen and not letting out into a pasture until they become settled and are familiar with their new surroundings. ItÔÇÖs only when you reach larger numbers that youÔÇÖll begin to need feed bunks, etc. ┬á

On a smaller scale, if youÔÇÖre seeking only to fill the family freezer and perhaps sell beef to family and friends, feeding out two calves (theyÔÇÖll grow out better together) is a better option over raising only one.┬á

Larger numbers require other considerations. Wagner advises considering preconditioning the calves or placing them in a graded feeder calf sale to boost your profits.┬á

ÔÇ£If you took five calves to the preconditioned sale, they would put them in a group that would be sold as a lot. You would get paid the same as anybody else,ÔÇØ he says. Beef cattle that can eat out of the bunk, have been vaccinated, etc. are worth more money. If choosing to raise your calves for slaughter, Wagner also advises, due to demand, scheduling your appointment with the slaughterhouse very early in the process.┬á

As for selling calves, Wagner says that stockyard, preconditioned and grade sales are best for smaller numbers of calves.┬á

Preconditioned sales usually generate greater income and require you to guarantee that such requirements as a specified feeding program, vaccinations, etc. have been met. On the other hand, there are no such guarantees at grade sales.┬á

Different types of calves will also sell better at different sales. For example, calves with more ear from a higher percentage of Brahman blood will sell better at sales in those is parts of the country seeking calves with higher heat tolerance. For larger numbers of calves, as in a tractor-trailer load, there is the option of video sales where calves are sold at the stockyard but are loaded out directly from the farm.

But, Wagner acknowledges, itÔÇÖs hard to get that big. ┬á

WagnerÔÇÖs biggest piece of advice is that raising calves for beef cattle requires a good body of knowledge about their health, especially if those calves are brought in from a sale as opposed to raised at home.┬á

ÔÇ£YouÔÇÖll get in trouble if you start buying calves, and donÔÇÖt know about the health issues they can have,ÔÇØ he says. ÔÇ£They can get sick and die.ÔÇØ┬á

Vaccinating, monitoring them, etc. are key to success. To get this, Wagner strongly advises seeking the advice of your county extension agent along with visiting similar successful operations to gain their valuable insight. You should also establish a good relationship with your local large animal veterinarian. ┬á

This article originally appeared in the July/August 2022 issue of┬áHobby Farms┬ámagazine.