Raising Chickens: A Diary Of 4 Hatchlings

Here is the story in words and pictures of 4 chicks growing up, and our observations of raising chickens from egg to successfully mating in 23 weeks. 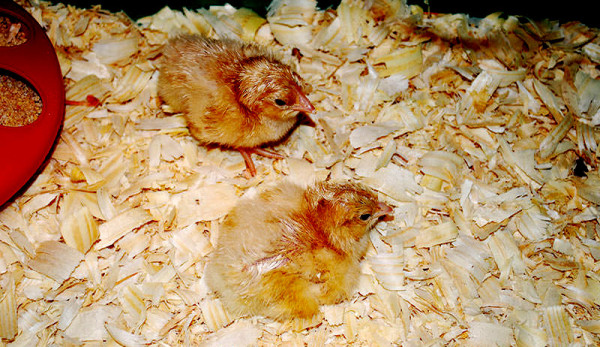 On April 1, 2015, four of the 14 fertile heritage English Buff Orpington eggs that were shipped from California to our home in Botetourt County, Virginia, began to hatch. My wife, Elaine, and I kept a diary of our observations raising chickens so that weāand youācould better understand what to expect from incubation efforts and gain insight into chicken behavior. Hereās the story of Oscar, Orville, Ophelia and Olivia.

As spring sprung, an egg began to hatch.

Around 12:30 a.m., we were awoken by peeping coming from the incubation room, down the hall from our bedroom. We rushed to the incubator and witnessed Oscar already hard at work, as his tiny beak steadily widened the crack he had created. Thinking the process could potentially take many hours, we went back to bed.

In retrospect, we shouldnāt have left, as Oscar probably came out an hour or two later: When I checked on him again at 4 a.m.ābecause I was too excited to sleepāhe had already escaped from his shell. This began what became consistent behavior for Oscar: He was always in a hurry to do everything a cockerel does.

Also of note, a second chick, Ophelia, was well on her way to hatching. At 6 a.m., my wife and I watched her emerge. Fascinatingly, as soon as she was out of the egg and still quite unsteady on her feet, Oscar appeared to be doing the rooster mating dance/shuffle around her. Such was the start of our first try at raising chickens.

At 4 a.m., worried that no more of the eggs would hatch, I awoke and was delighted to find that two of them were still viable. For the next two hours, I observed Orville slowly emerging from his shell. The other chick, however, was making very slow progress, and we began to despair that it would not survive.

At 8 a.m., I had to leave for work, but I was thrilled to hear from Elaine around noon that Olivia had made her debut. Just as Oscar was always well ahead of the growth curve, luckless Olivia was always well behind.

Although we couldnāt yet tell which sex Oscar and Orville were from their appearance, it was clear that the two of them could. Oscar came out some 26 hours ahead of Orville, and so became the alpha male and never let his brother forget his inferior status.

Periodically, Oscar would rush at Orville and drive him to the other end of the brooder. The former also danced around Ophelia and Olivia, though the pair was totally indifferent to his charms. I was positive we had two roosters and two hens. Elaine disagreed, saying that Orville might be a hen and complained that I shouldnāt have given him a male name this early. Stubbornly, she decided to change his name to Oneida.

Oscar began precrowing, stretching out his neck, fluffing and flapping his feathers, and warbling a very pathetic type of crow; Ophelia and Olivia remained oblivious to this. Oscar further tormented Orville/Oneida by periodically rushing him/her.

Elaine conceded that Oneida might be misnamed, as Orville briefly charged Oscar after yet another attack from his brother. Oscar corrected Orville after the latterās fleeting rebellion by severely pecking him.

On May 27, Oscar attempted to mate with Ophelia and Olivia in succession; both fled, squawking. Orville watched the whole episode from the safety of a corner. Elaine finally conceded that no fowl named Oneida lived in our brooder.

Already much smaller than the others, Olivia began to periodically lose her balance and fall, and only with great effort regained her footing. This continued for three days, and she became weaker and weaker. We felt that she would die soon and removed her from the brooder and placed her inside a box next to it. Afraid that she might have something contagious, we put a probiotic in her water and in the water of the others.

The next day, I came home from school and found Oliviaās box empty and assumed that she had died. I asked Elaine what was the time of Oliviaās demise, and she said the pullet was alive an hour prior. We went downstairs and found Olivia in the brooder with the others, moving about naturally. Apparently, in an amazing recovery, she recuperated from her ailment and flew from her box back into the brooder.

The brothers fall into their roles, as alpha Oscar starts to strut.

At dawn, Oscar managed what can be called a crow: a hoarse, guttural sound that had the cock-a-doo but no doodle. We ponder what would happen if Orville tried to crow; the consensus was that Oscar would correct such misbehavior. Our quartet moved outside to their henhouse and run, which was created especially for them. (Our heritage Rhode Island Reds dwelt in the adjacent fenced-in coop; the two runs shared a wire fence and three posts, which will become important later.)

Orvilleās humiliation knew no bounds, as Oscar constantly tormented him, chasing, pecking and leaping onto his brother. Orville became totally submissive and fled as soon as his brother began to approach him.

Oscarās crow, now quite adultlike, started to occur at all hours of the day. He also began his daily crowing about 90 minutes before the official sunrise, which is a trait weāve observed in the various roosters weāve owned.

Oscar crowed at a stranger for the first time, which we welcomed: Our alpha cockerel could now serve as the de facto watchdog for our home. Oscar also began to sound off any time a vehicle came down our drivewayāyet another commendable trait.

There were a lot of fireworks happening during this month.

Oscar made the food cluck for the first time, the specific sound a rooster makes to let his flock know heās found a treat. Olivia and Ophelia came to his call, and he tried, unsuccessfully, to mate with them as they fled. An outcast in his own coop, Orville spent much of his time off in a corner of the run.

Oscar successfully mated with Olivia. He was a little unsteady during the mounting process but quickly learned how to maintain his balance. Meanwhile, even though Ophelia was noticeably bigger than her smaller sister, she continued to bolt from Oscar every time he approached.

Risking a thrashing from Oscar, Orville crowed for the first timeāa poor sound, to be sureāand, unsurprisingly, Oscar charged and flogged him. Undeterred, Orville crowed again the next morning and again received his comeuppance. No more of his crowing occurred.

Oscar meets his match, and Olivia leaves us.

At dawn, Oscar and Don, the heritage Rhode Island Red alpha rooster that lived in the adjacent run, began squaring off. Both cockerels were similar in age and both had their own hens. Oscar was larger in size and noticeably heavier, but Don was quicker and more agile. They met every morning at the middle post that separates the two fenced runs, and they would chest-bump through the wire and try to peck each other. Whichever one I let out first ran to the pole and waited, pacing, for the other to leave his coop.

I removed her from the run so that she might have some solitude and we could administer probiotics.

Oscar witnessed her departure and emitted a loud groan. He paced back and forth for two days, apparently looking for her. Sadly, Olivia died on that second day. We speculated that she was a late-born pullet that was congenitally inferiorāand ultimately doomed.

Oscar was not the only one upset. Losing a chicken that we had watched hatch was upsetting to Elaine and me as well. We had observed her struggle to hatch, overcome being the smallest one of the flock, and persevere during an illness. But sometimes chickens just succumb, and we humans donāt really know why.

For the first time, Ophelia willingly allowed Oscar to mate with her, squatting in his presence. We were overjoyed, feeling that Opheliaās egg-laying days must be near.

Oscar became increasingly sexually aggressive toward Ophelia, chasing her even inside the henhouse and when she attempted to roost for the night. His belligerence toward Orville increased as well, as he began to chase him into the corners of their spacious coop. Then Oscar attacked Elaine from behind while she was refilling the feeder, so I attempted behavior modification with him, specifically picking him up, holding him firmly to my side and gently bending his head downward in a submissive posture.
Oscarās previous aggression toward Orville was one thing, but his aggressiveness toward Elaine was another entirely. The next day, Oscar bit me on the hand, and once more, I tried the bended-head cure, which he followed up by attacking Elaine and me the next day. A day later, we culled him from the flock.

Peace reigned in the Buff Orpington coop. Ophelia allowed Orville to mate with her. A day later, she laid her first egg, and the next day, a second one. Orvilleās crowing began to really āboom,ā and he met Don every morning at the middle post for three to five minutes of chest-bumping, pecking, mock charges and general obnoxiousness. Life was good, though, for the members of both flocks, and Elaine and I hoped that next spring Ophelia would brood a clutch of eggs fertilized by Orville.

I wish the story of Orville and Ophelia and our first attempt at raising chickens could end on that previous hopeful note, but, alas, such was not the case. On the morning of Oct. 16, I found Ophelia dead inside the coop from an unknown ailment. She had laid an egg the day before and seemed her sprightly self. Because Orville is such a handsome and friendly cockerel, we ordered more eggs from the same California supplier last spring, but no eggs were available. I learned, however, that a student of mine was searching for a good rooster, so I gave Orville to her. He is now the leader of a thriving flock that lives about 10 miles away.

Recently, I encountered that student at a farmers market. She told me that Orville was doing well and had quickly become a family favorite and had also collected an impressive flock of hensāsigns of a true alpha male. I told her that if she wanted to find a source for heritage English Buff Orpingtons, I would help her in that quest. Heritage Buffs are a wonderful breed, and readers might want to consider raising this or other traditional breeds in their backyards. Itās truly a fascinating and rewarding experience to observe chickens from the time they hatch to adulthood.