Raising Goats: How To Bottle Feed A Kid

The bottle feeding process is easier than you might think, and it ensures proper nutrition and forms more docile milk goats. 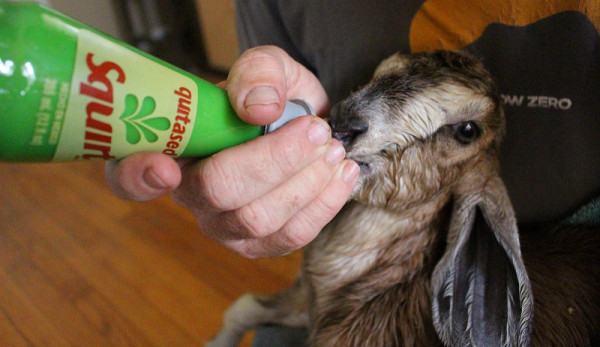 At our farm, bottle babies are the rule. We are a dairy, and so we bottle feed for a couple of reasons. First and foremost, it allows us to make sure kids are getting enough milk to grow well and thrive andÂ that the business gets what it needs. Second, and nearly as important, is that bottle babies, who are handled several times a day from birth, are generally more docile and easy to handle as they grow up to be milk goats. This is why many people who show goats or raise them for milk orÂ meat also raise their kids on bottles. But for most hobby farmers and pet owners, there is no real need to ever bottle feed.

Whether it be a newly purchased kid, the loss of a nursing mother or the rejection of a kid by an otherwise fine dam, with enough years in raising goats, eventually you will probably find yourself needing to raise a bottle baby. Here are our tips on how to make that as painless as possible.

If you have a goat in milk, even if it is not the mother of the kid you are raising, start there. Goatsâ€™ milk is obviously the best choice to bottle feed if you have it. If you do not, we recommend whole cowâ€™s milk. This can come from either your own farm (if you have a milk cow) or just from the grocery story. If it’s store-bought, just be sure it is whole milk. We do not recommend milk replacer. To start with, it’s more expensive and less accessible. Also, I just do not believe something made in a lab is a better option than the real thing. Mammal babies drink milk.

If your kid is a result of a death in childbirth, this may sound grotesque, but you should milk out what you can from the mother right away. The first milk mothers produce is colostrum, which contains vital nutrients and antibodies. Without getting colostrum in the first day, kids are unlikely to survive or do well. Feed stores do carry powdered colostrum products for an emergency.

How Often To Bottle Feed

On the day of its birth, a kid will need several small meals. We generally bottle feed about every four hours or when the kid squawks. Donâ€™t worry if the kid doesn’t eat much more than a couple ounces for the first several meals. It will come around. After that first day of feeding colostrum, we move to the following schedule through weaning.

Feed eight to 12 ounces of warm milk, four times per day. The kid might not always eat it all. That is OK. Generally you can tell a kid is full during any feeding when it starts chewing on the nipple instead of sucking.

Feed 12 ounces (and more if kids is still hungry, as much as 20 ounces) three times per day. Make the bottles progressively less warm to get the kid to cold milk by two weeks.

Feed two times per day, about 30 ounces. If the kid is not drinking that much, or if you have the time and donâ€™t mind doing it, remain at three times per day with a little less per feeding.

When kids are reliably eating hay and nibbling goat feed, start the weaning process by reducing the number of feedings and volume per feeding. You can do it abruptly all at once, but your kids will be angry. I suggest a multiday process.

These are rough guidelines for raising kids with limited time and resources. We devised these to help working folks fit bottle raising into busy schedules. Also possibly helpful to reduce time spent feeding is building and using a lambar. Obviously, if you have the time, you can feed less milk more often, which is how they would feed if nursing.

There is no right or wrong way to bottle feed, as long as your kids are eating well and gaining weight. They should put on about 10 pounds a month on average. From about 2Â weeks onward, make sure they have free access to hay and water. At about 4Â weeks you can start introducing grain. It might take a while for them to start eating it. Again, do not wean them fully until they are eating hay, grass and feed reliably.

I love bottle feeding. I also think the time spent bonding with the kids is why our adult herd is so loving and people-oriented, and why they are almost always gentle, easy milkers on the stand.

Lisa Seger is one half of Blue Heron Farm, a humane goat dairy in Field Store, Texas. Like all dairy farmers, she has no free time and few actual hobbies. When sheâ€™s not farming or making and selling cheese, she can usually be found rescuing and fostering stray dogsâ€”or posting ridiculous things on social media. Follow her on Instagram: https://www.instagram.com/blueherontexas/