Raising Pigs & When To Trust Your Instincts

The vet said we should put down our sow, but our guts told us otherwise. 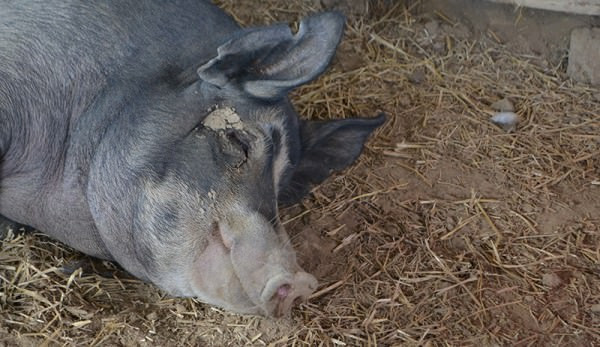 I was at work when I got the voice message from my mother. â€śI have bad news about Hen Wen,â€ť she said. â€śReally bad news.â€ť

Hen Wen is our familyâ€™s 5-year-old Berkshire sow, a large, swaying pig whose past output (until very recently) gifted our farm with large litters of healthy pigs. Her breedability is the cornerstone of our meager operation, so bad news about Hen Wen is bad. The sow was due any day with what we hoped would be a sizable litter, and we were excited that the summer heat would remove temperature regulation from our list of potential problems.

â€śOne piglet made it out,â€ť my mother told me when I called her back. â€śBut thatâ€™s it. She labors and labors, but nothingâ€™s happening.â€ť

The local large animal vet was called, and he slipped on his cattle-birthing glove and examined our sow, whom he declared â€śtoo bigâ€ť despite her breed-appropriate size. (It should be pointed out, there are no pig vets in our area, only doctors of cattle, so this man was a cow veterinarian doing his best in an unfamiliar situation.) Finally, he delivered his diagnosis.

â€śShe wonâ€™t make it,â€ť he said. A piglet had become lodged inside Hen Wenâ€™s birth canal and couldnâ€™t be loosened. â€śIn this heat, infection will set in soon. Sheâ€™ll be dead in 36 hours.â€ť He commented again on her size, and then offered to put our sow down for a hefty fee.

When I told the news to my wife, she jumped in the car and drove herself and our three kids (it was summer break, after all) over to the farm immediately where, upon arrival, she grabbed an arm-length glove from the veterinary supplies cabinet and proceeded to second-guess the vet with an examination of her own. Her sheathed hand quickly found the lodged piglet, and with a quick tug, confirmed it was stuck. But then she pulled. And pulled. She pulled at that piglet for almost two hours until, finally, a monstrously oversized carcass emerged from Wenâ€™s body.

A runty-sized carcass followed, and excitement abounded that, single-animal litter aside, our beloved sow would survive. But then, again, she labored fruitlessly. My wife grabbed another glove and delivered further assistance, but this time it wasnâ€™t enough. Another overgrown piglet was stuck, and no amount of pulling loosened this one. Finally, exhausted and filthy, my wife lay down in the straw next to Hen Wen and cried, broken-hearted that our pig was dying.

Hen Wen didnâ€™t die. She labored through the night and, the next day, finally expelled the stuck piglet, which was followed by the afterbirth. She exited the barn, ate and drank waterâ€”all the things she still does today in the late days of summer. Hen Wen survived.

The vet, a cattle expert unfamiliar with porcine anatomy, had wanted to put her down. My wifeâ€™s instincts said to second-guess that call.

There are a number of items in an agrarianâ€™s toolkit that he or she will come to consider indispensible: a tractor, a pitchfork, a pair of wire-cutters that snips electric line just right. These tools can differ from farmer to farmer (Iâ€™ve, for instance, never owned a tractor), but one tool that every farmer needs to keep sharp and ready at hand is instinct.

Instinct may seem ineffableâ€”you canâ€™t grip it in your palm the way you can a shovel handleâ€”but itâ€™s just an effect of your experience with the land, the animals. The way you know what time it is when a shadow creeps up the live oak shade tree in the front yard or understand from the way a chicken crosses the yard that somethingâ€™s not right in the woods beyond. Or that a sowâ€™s not down for the count, no matter what the paid expert says. Instinct.

When youâ€™re the one who walks the yard, who feeds the animals and tills the soil, you gain an almost-cellular understanding of what it takes to farm your land. Youâ€™d be lost on a neighborâ€™s homestead, but chores and maintenance of a specific piece of earth tend to fuse one with the inhabitants and goings-on. And while a good farmer always seeks advice and instruction in an effort to best serve the farm, this information should always be weighed against what your gut tells you.

So trust your instinct. It keeps a farm running.