Demand for ramps is outstripping the natural supply, but any farmer with a bit of forest and patience can grow these delicious wild onions. 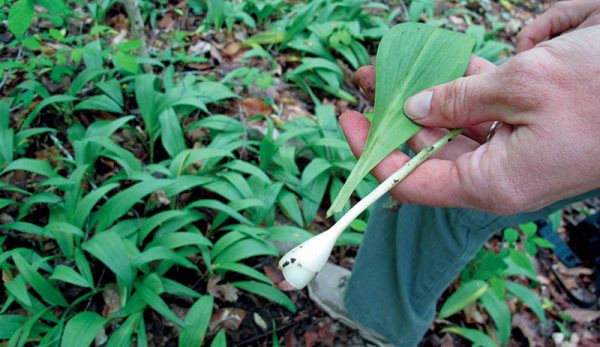 The edible bulbs and greens of wild-growing ramps (Allium tricoccum) are so deliciousŌĆöthe sweet taste of onions with a strong garlicky scentŌĆöthat their spring harvest sparks festivals throughout Appalachia. Urban chefs have discovered their alliumesque charms, too, and put ramps on their menus. Well-heeled diners are responding.

The bulbs look like spring onions, but the leaves are wide like those on a lily of the valley. The flower stalk comes up in early summer as the leaves are dying back. Its umbel of tiny black seeds persist through the seasons and signal ramp beds for the observant forager.
A happy bed of wild ramps can cover acres.

Sadly, ramps have become an increasingly rare delicacy as rising demand depletes the natural supply. Harvesting the bulbs effectively kills the plants. They can take seven years to grow from seed to harvestable plant.

Because of these rapid harvests and slow renewals, some areas have been depleted because of unethical foraging. Gathering ramps commercially in Quebec has been banned. The Great Smoky Mountains National Park also banned ramp foraging in 2004.

Fortunately, horticultural scientists at North Carolina State University have researched how farmers might grow robustŌĆöand profitableŌĆöramp populations on their own land. It turns out, any farmer with a bit of forest and plenty of patience can cultivate these little wild onions.

Hardy in zones 3 to 7, ramps demand a particular woodland habitat: shady and damp (at least 35 inches of rainfall throughout the year), with well-drained, acidic, calcium-rich soil. Trilliums, trout lilies and mayapples favor these same conditions. So if you notice an area where those plants thriveŌĆöprobably under the shade of beeches, maples, hickories or oaksŌĆöyouŌĆÖve found a place ready-made for cultivating ramps.

Native to the eastern U.S. and Canada, ramps grow wild in forests from Minnesota to Maine and as far south as Georgia. They thrive in areas with cool summers: southern mountains, north-facing piedmont slopes and northern floodplains.

Ramps belong to a group of woodland plants called spring ephemerals. Rather than compete with the trees for sunlight and water, they awaken in early spring, reproduce quickly and go dormant as tree leaves block the sunlight and the roots suck up water. Other wild edible ephemerals include spring beauties, trout lilies and mayapples.

A good portion of the land in the eastern U.S. is forested and too shady for conventional farm crops but ideal for ramps. You wonŌĆÖt reap what you sow for five to seven yearsŌĆömaybe three, if you plant bulblets instead of seedsŌĆöbut youŌĆÖll use otherwise fallow acreage to produce a crop that brings in about $15 a pound for the mature bulbs and $12 a pound for the leaves. You can expect that a 1Ōüä10-acre bed (about 4,000 square feet or a series of 4-foot-wide beds that add up to 1,000 linear feet) will earn $1,500 to $2,000 a year after the ramps are mature. Ramp bulbs can also be pickled or dried for future sales.

A bed that size can hold about 10,000 plants from seed or bulbs. Seeds for that bed might cost $240. An equal number of bulblets might run $2,500, not counting delivery. From seed, youŌĆÖll have mature plants in five to seven years; from bulblets, three to five years. If you can transplant from your own land or that of friend, youŌĆÖll obviously save a lot of money.

Ramps do best in beds with a pH of 4.5 to 5.5. Supplement the soil with about 400 pounds of calcium sulfate (gypsum) per 1/10-acre bed. This makes more calcium available without raising the pH level.

Sow ramp seeds in a weed-free bed in early fall. Space them 4 to 6 inches apart, and press them into the soil with the palm of your hand. Speed up the process by planting bulblets, 2 to 3 inches deep, in early spring, just after the ground has thawed. Either way, mulch with a 2-inch layer of hardwood tree leaves, and use overhead irrigation during dry spells.

YouŌĆÖll know the plants are mature when their leaves reach heights of 6 to 8 inches. The best tools for harvesting are either a shovel or a hori-hori knife.

These knives are sold as gardening trowels, but Japanese mountain foragers crafted them centuries ago with a sharp edge on one side of the blade and a serrated edge on the other. TheyŌĆÖre good for cutting roots and are sturdy enough to pop out weeds in the garden or edible bulbs in the forest.

Gently dig up a clump, removing some bulbs but leaving others intact. Replant the remaining bulbs and any small bulblets for the next generation, and transplant clumps to new beds.

Once the plants begin to flower, plan to collect the seeds in late summer and plant them in prepared beds nearby. Over time, ramps put out rhizomes and roots laterally and propagate by themselves. But still gather only 10 to 15 percent of mature bulbs each year so you donŌĆÖt harvest them faster than they can reproduce.

WhatŌĆÖs the best way to eat ramps? Trim away the white roots and the little knob they spring from, wash well and toss the whole plantŌĆöbulb, stem, leavesŌĆöinto a pan of oil, butter or bacon fat. Saut├® just until the leaves wilt but are still bright greenŌĆöless than a minute. Serve as a side dish, or dice them up before cooking to add to an omelet.

You get a mild garlicky flavor with an oniony crunch and a leafy succulence. As you finish off your ramps, youŌĆÖll realize you want to plant lots of them every year.

ItŌĆÖs also worth noting that thereŌĆÖs a market for ramp leaves, which taste exactly like the bulbs. They can be harvested at 5 to 6 inches tall, three to five years after planting seeds and at least two after planting bulblets. Simply pinch or snip off the leaves just above the soil line. And clearly, thereŌĆÖs also a growing market for selling seeds and bulblets to other farmers that can bring some quicker cash flow. This way you can have several harvests without depleting your bulbs.