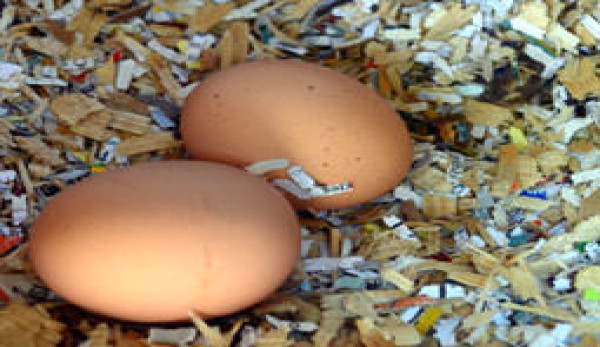 Taking just a few seconds to cool¬†freshly laid eggs could add weeks to their shelf life, according to a study from Purdue University.

The rapid-cooling process, developed by Kevin Keener, PhD, a food science professor at Purdue, uses liquid carbon dioxide to stabilize the proteins in egg whites, so much that they could be rated AA‚ÄĒthe highest grade for eggs‚ÄĒfor 12 weeks. Eggs cooled under current methods lose the AA grade in about six weeks.

“This rapid-cooling process can provide a significant extension in the shelf life of eggs compared to traditional processing,” Keener says.

Keener’s results, published in the journal Poultry Science, also show that membranes surrounding the eggs’ yolks were maintained for 12 weeks when eggs were rapidly cooled. The membranes serve as a barrier to keep harmful bacteria from reaching the yolk, a nutrient-rich reservoir that bacteria could use as a food source.

“The structural integrity of the yolk membrane stays strong longer, which may provide a food safety benefit,” Keener says. “The membrane being stronger would be another defense against bacterial invasion, such as salmonella.”

The rapid-cooling technology takes liquid carbon dioxide and turns it into a “snow” to rapidly lower the eggs’ temperature. Eggs are placed in a cooling chamber at about minus 110 degrees F, and carbon dioxide gas is generated. The cold gas is circulated around the eggs and forms a thin layer of ice inside the eggshell. After treatment, the ice layer melts and quickly lowers an egg’s internal temperature to below 45 degrees F, the temperature at which salmonella can no longer grow.

Keener’s previous research showed that the carbon dioxide in bicarbonate form significantly increases the activity of lysozyme, an enzyme in the egg white that has bactericidal properties.

Traditionally, eggs are at more than 100 degrees F when placed into a carton. Thirty dozen eggs are then packed in a case, and 30 cases are stacked onto pallets and placed in refrigerated coolers. The eggs in the middle of the pallet can take up to 142 hours‚ÄĒnearly six days‚ÄĒto cool to 45 degrees, Keener says.

A 2005 U.S. government report showed that if eggs were cooled and stored at 45 degrees within 12 hours of laying, there would be about 100,000 fewer salmonella illnesses from eggs in the nation each year.

Keener says with additional funding, he would continue to study the benefits of rapid cooling, including inoculating the inside of shell eggs with salmonella and examining how other proteins in the whites and yolks of eggs are affected.

Keener is a technical consultant to the American Egg Board and a member of the United Egg Producers Scientific Advisory Panel. His work was funded by Purdue and gift funds.
¬†