When one farmer finds the barn on his new property in shambles, his solution is to take it apart and rebuild it from the ground up. 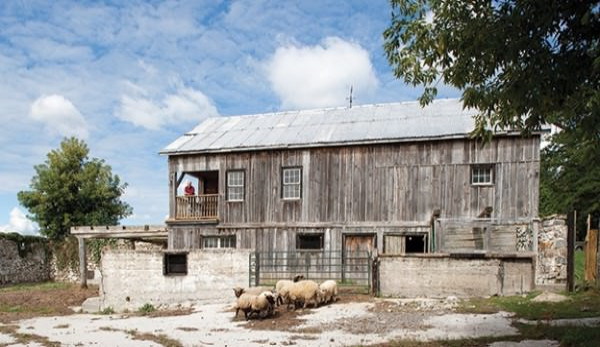 When my wife, Darlene, and I first toured our future farm with our real-estate agent, we hardly gave the barn¬†a second thought. At first glance, we could tell it was in rough condition, with a noticeable sag in the roof and a gaping hole in the south end where some siding had been removed. Likewise, an entire section of flooring and floor joists had been removed, surely a sign that the rest of the building was on its last legs, too. Still, after more than a century, the black-painted barn was charming in its own way: The sheer size of the hewn timbers left me awestruck at the skills of 19th-century barn builders, and the earthy scent of hay and aged wood lent it an undeniable old-timey appeal. But as a practical farm amenity, this barn didn‚Äôt have much to recommend it.

Fortunately, the rest of the property did. In fact, the farmstead was exactly what we were looking for: After living on a smaller rural property for the previous five years, the prospect of living on a real farm was tempting. At last, Darlene would be able to test her mettle as a hobby farmer and raise a few sheep. Even better, we would have plenty of pasture on which to graze the flock and a hayfield in which to grow enough forage to see them through the winter. And in contrast to the barn, the farmhouse‚ÄĒa brick Victorian with a lot of character‚ÄĒwas in great shape, updated with a functional kitchen, new windows, decent insulation and a working fireplace, all of which were lacking in our previous house. It so impressed us that we turned a blind eye to the obvious flaws in the barn and bought the property then and there.

But within a couple of months, the importance of the barn quickly slapped us in the face. After all, where exactly were our new sheep going to spend the night if not in the barn? And where would we store the hay? As much as we tried to rationalize that the barn could somehow suffice, we were fooling ourselves: It was hardly weatherproof or predator-proof, let alone safe for us to walk in. This really was a place not fit for man nor beast.

There was a time when that barn was the pride of the family that built it. Dating to the 1880s‚ÄĒwe found a partial date inscribed in the timber over the main door‚ÄĒits signature mark is its long, linear footprint, measuring 30-by-100 feet, which allowed room for not one but two hay-wagon doors. This last aspect struck me as curious, because most barns aren‚Äôt that much longer than they are wide, but there are dozens of similar examples here in our corner of the country¬≠side. More typical is its position, built into the side of a hill so that the basement livestock pens open at ground level on the downhill side, while the upstairs haymow is accessible from the uphill side. These bank barns were quite an ingenious innovation adopted widely wherever a suitable hillside site could be found.

Back then, the agricultural economy was making a wholesale transition from wheat to mixed farming and commercial dairying. But barns were still being made the traditional way, using huge, hewn timbers assembled into ‚Äúbents‚ÄĚ with volunteer labor from all the available local men. Basic to timber-frame construction, a bent is composed of two posts and a beam, joined by pegs to form an ‚ÄúH.‚ÄĚ Several bents make a barn: Ours had nine, each standing 14 feet high at the eaves.

As Darlene and I scratched our heads over what to do, the answer came from Ralph Johnson, a septuagenarian contractor who had helped us once before on a building project at our former house. Of all the friends, colleagues and tradesmen who saw the barn in its dilapidated
state, he was the only one who didn‚Äôt throw up his hands and declare it a lost cause. On the contrary, Ralph‚Äôs eyes lit up during took his first tour, and it was he who came up with a practical and affordable solution.

The since-deceased quintessential rural codger, Ralph never claimed much book-learning but was savvy on the details of timber-frame construction. Having grown up on a farm, he loved old barns and knew precisely how all the pieces should fit together. Late in life, he had found an interesting niche in the local building trade as the go-to guy for vintage timber components. Despite an urgent need for knee-replacement surgery, you could find him on any given day high on a scaffold, dismantling an old building‚ÄĒpiece by piece‚ÄĒbeing careful to salvage the best lumber for his inventory of hewn posts and beams, flooring, rafters, barn boards and other miscellaneous wood. The next day, he would be at a different job site, using that vintage lumber in the construction of a new building. He had a knack for rustic garden sheds and rural outbuildings that function like new but look traditional. And it was something along these lines that he proposed for us.

Upon inspection, Ralph said he‚Äôd seen other barns in a lot worse condition than ours and proposed that much of it‚ÄĒthe eastern end‚ÄĒwas actually quite salvageable. Virtually all the really bad decay was confined to a lean-to across the entire south elevation, which was added on a concrete foundation sometime in the early 1900s and not built to the same standards as the rest of the barn. In fact, he said the lean-to was probably the barn‚Äôs undoing, because the roof pitch was so gentle that it encouraged ice dams and water leaks. Even so, there was also significant decay on the west end of the barn; this, after all, was where the floor joists were missing. So Ralph suggested the lean-to be sacrificed completely and, more drastically, that the barn should be reduced by half: from nine bents to five, thus preserving the east end.

Trouble was, even the five good bents displayed some serious decay, but there again, Ralph had a solution. He showed us that the rot was limited to the tips and bases of the posts. All we had to do, he said, was slice off the punky stuff at each end and the bents would stand very well for another 120 years. Of course, this meant the barn would be reduced by about 3 feet in height, but it wasn‚Äôt like we needed a full-sized barn for our small hobby operation.

We thought Ralph‚Äôs ideas were a stroke of brilliance. Not only would we get a serviceable barn that looked like a barn should, I also liked that it would be built with existing materials, reducing the cost drastically and satisfying my green conscience at the same time. Even better, Ralph figured there would be enough material left over in case some other ideas came to mind. It occurred to me to incorporate a room‚ÄĒ16 by 24 feet‚ÄĒthat could serve as a studio or workshop, including a balcony from which we could survey our domain. Sure enough, there were plenty of surplus two-by-fours to frame it and lots of granary boards to floor it. Old sash windows were donated by friends, and with a salvaged railing for the balcony, we hardly had to buy a stick of new lumber for the entire project.

The first job was to hire a guy in a skid steer to clean out decades of hay and manure‚ÄĒgreat fertilizer!‚ÄĒwhich revealed that the barn floor and barnyard had been laid in concrete. Ralph‚Äôs work began with dismantling the huge sliding entrance door to the haymow, and then he took apart the granary. Unlike a wrecking crew, he and his helpers worked diligently, tossing only the lumber that was beyond hope but treating the good material with kid gloves. They pulled each nail and stacked each board in orderly piles: granary boards (some up to 18 inches wide), barn-board siding, floor planks, surplus beams, rafters and more. In less than a week, the building was a skeleton and demolition of the west end had begun.

As the weeks progressed, the most fascinating aspect was watching as the building was painstakingly leveled and re-erected. The roof was dismantled in its entirety‚ÄĒcorrugated panels, rafters and all‚ÄĒand set aside. As Ralph cut the bents down to size, he trimmed off the rot from the tips and bases of the posts with his chainsaw. Then the blank slate started to take shape again. One by one, the bents were reassembled and the roof components were put in the exact positions from which they were taken. Indeed, when at last the roof was back in place, the project had turned the corner and all that was left for Ralph to do was nail the existing siding back in place. The trick here was to align the boards with the painted side on the inside, so that the weathered gray barn-board was on view.

Ralph‚Äôs work was done in about six weeks (see finished barn at the top of this article), but the job wasn‚Äôt over when he bade us goodbye. He left behind a mountain of debris: random boards that weren‚Äôt recyclable, enough loose hay to bury a small town and a 9-foot-high pile of surplus barn beams, each 15 feet or longer. At first, we thought the beams might actually have some value and could be sold, but we couldn‚Äôt even give them away. And thus began an epic job in which I sliced every single one of them into manageable lengths with a chainsaw and split them into firewood¬†(pretty poor firewood, at that). It was five years before we burned through all of it.

But the worst was a nagging problem with the foundation. Although in hindsight, it appeared as plain as day, we didn‚Äôt see that the mortar joints in the existing stone cellar wall had all but washed away and that it was destined to fail if not repointed promptly. Just as bad, water was weeping into the basement every time it rained. It didn‚Äôt help that the ground beside the barn was tilted toward the foundation. So we called in an excavator to fine-tune the grading and also began what is still an ongoing project: filling each joint with new mortar mix and sand. At this writing, there is still more repointing to do, but at least Darlene and I can sleep at night knowing the building is sound.

Our city friends scoff, but we are as proud of the barn rehab as we would be of a designer kitchen renovation. Although a humble building, the barn is the heart of our hobby farm. There, we have faithfully watched as new lambs are born each spring, and July wouldn‚Äôt be complete without the ritual of stacking 400 bales of hay in the mow each summer. The barn is where we raise our meat birds for the freezer, and we keep our layers there, too. And when a thunderstorm rolls in from the west, there‚Äôs no better vantage point than from the barn balcony.

Sometimes I shake my head, remembering how blithely we overlooked this giant elephant in the backyard. Here‚Äôs to Ralph, for having the foresight to make something useful out of such a sorry mess. May he rest in peace.

Tom Cruickshank is a writer for Hobby Farms magazine.