Have you caught a chicken red legged recently? It's an alarming sight, but there are three reasons your chicken may have red legs. 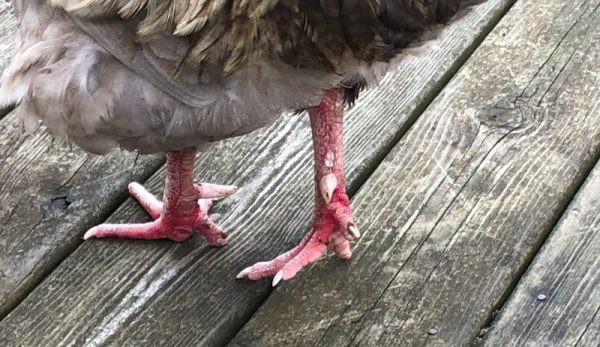 Jaeson stood in the kitchen doorway, a squawking rooster in his arms. As I approached, I started thinking about shank-color standards for Orpingtons. But I stopped in my tracks when I caught sight of Ginger Bean’s legs.

Instead of their usual white chicken color, Ginger Bean’s legs were a bright red, as if he’d gotten a severe sunburn. The webbing between his toes and the backs of his shanks were practically neon.

I went to get a closer look, but Ginger Beanâ€™s cooperation ended there. He thrashed out of Jaesonâ€™s arms, scrambling off our deck and dashing out to the back before I could inspect him more thoroughly.

Once I took care of the red on Jaesonâ€™s legs (courtesy of the fleeing Ginger Beanâ€™s talons), I contacted my trusted poultry pathologist, R.M. Fulton, DMV PhD, a Diplomate of the American College of Poultry Veterinarians. Recently, he’s also acted as one of my son Michael’s professors at the College of Veterinary Sciences at Michigan State University.

As more detail was necessary for a reasonable diagnosis, I lured the technicolor rooster back with some sunflower seeds. The redness wasnâ€™t raw, thank heavens, nor was it bloody. No blistering or pus was noticeable, and there was no discernible odor.

There was sensitivity, however. Ginger Bean most definitely did not want me to touch the irritated areas on his legs and between his toes.

I was mystified. I had never come across this condition in all my years of poultry keeping. Fortunately, Dr. Fulton had.

Here are the 7 questions chicken keepers should ask their veterinarian.

Improperly kept coop litter can cause myriad health issues for chickens, and scald is one of them. Instead of boiling water causing the injury, the culprits in scald are wet bedding and chicken droppings.

The sodden litter accelerates the decomposition of the feces, releasing ammonia. The combination of ammonia and wetness causes acute irritation, increasing blood flow to the affected area.

Scald is as painful as its name implies but can be easily treated by:

Analgesic ointment may be applied to the afflicted birdâ€™s toes and shanks if permitted by the patient. but the condition will fade on its own in a week or so.

Increased blood flow to the legs and toes once again comes into play, but this time the root cause is not an environmental condition but an internal one.

A roosterâ€™s hormones may go into overdrive as spring establishes itself and his hensâ€™ egg production starts up again. The layersâ€™ reproductive reawakening causes a natural, hormonal reaction in the rooster, indicated by his bright-red toes and shanks.

This condition also may occur as cockerels reach sexual maturity.

Check out these 6 changes you may observe as a hen ages.

Sharp, chilly winds make childrenâ€™s cheeks rosy as they play outside and turn ungloved fingers and ears bright red from the cold. When chickens are exposed to adverse wintry weather, the flow of blood to susceptible areasâ€”wattles, combs, earlobes and toesâ€”increases to adjust the temperature of these body parts upwards.

Rapid, repeated changes in climate can result in these areas becoming suffused with blood, a condition that reverses itself once the weather evens out.

As our hens have been in lay for more than a month and as the coop interiors were dry, I concluded that Ginger Beanâ€™s red legs resulted from the crazy weather Southeast Michigan has been experiencing this past week: sunny 70-degree days mixed in with gusty below-freezing flurries and torrential rain.

The color of his feet and shanks is alarming, but at least I know this temporary hue will give way to his usual white once our Michigan weather settles down … whenever that may be!