Photo by Judith Hausman Homemade chicken broth, combined with the sweet flavors of cabbages and potatoes, makes this easy soup perfect for a chilly fall evening. I’m back from my travels this week, and part of settling into home routines is returning to the stove. The season turned definitively to autumn while I was gone: […] 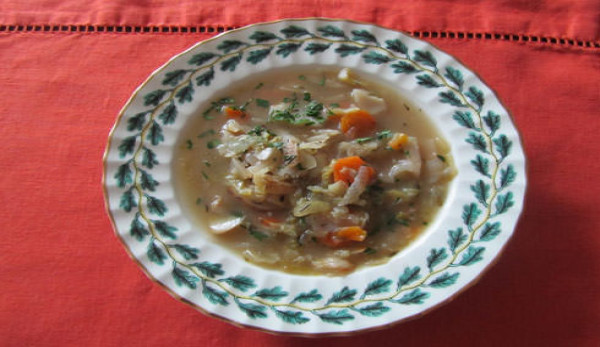 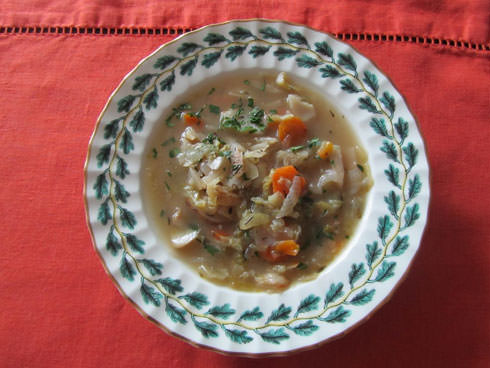 Homemade chicken broth, combined with the sweet flavors of cabbages and potatoes, makes this easy soup perfect for a chilly fall evening.

I’m back from my travels this week, and part of settling into home routines is returning to the stove. The season turned definitively to autumn while I was gone: Trees are yellowing, the quilt is on the bed and it’s time to make autumn soup. I had to give away the last peaches and tomatoes before I left, but potatoes, peppers, cabbages and carrots waited snuggly in the vegetables drawers for me. And that’s all you need to make this simple, easy soup.

I set up the food processor and trimmed up the vegetables, onions first so they could soften while I sliced up the others. I left everything unpeeled and cut into large, thin slices to give the easy soup some heft and texture. After first softening the onions in a little oil, I piled everything into the pot, except the potato slices. Because I wanted the potatoes firm, I left those until last. When the vegetables had softened a little in their own moisture (about 12 to 15 minutes), I dumped a quart of homemade chicken broth on top, still frozen. If you don’t have homemade chicken broth on hand, use a box of good-quality vegetable or chicken broth instead.

Then add salt, pepper and a tablespoon of thyme leaves, and bring to a gentle simmer. My friends and I ate the nourishing autumn soup with whole-wheat bread and butter.

Scrub all of the vegetables. Peel the carrots only if you must. Cut out some of the cabbage core if it’s thick. Don’t peel the potatoes unless you have big, tough ones. Slice the onions thinly in a food processor and start softening them in a little oil (or butter) in a large, heavy pot while you slice everything else. Add all but the potatoes to the pot and cook for 12 to 15 minutes. Then pour in the broth and add the bay leaf. Save the potatoes until last, adding them about 15 to 20 minutes. before serving. Add the thyme then season. It’s nice to garnish this soup with parsley or at least a sprinkle of paprika to brighten the color.