A professional chef offers her take on the holiday classic drink. 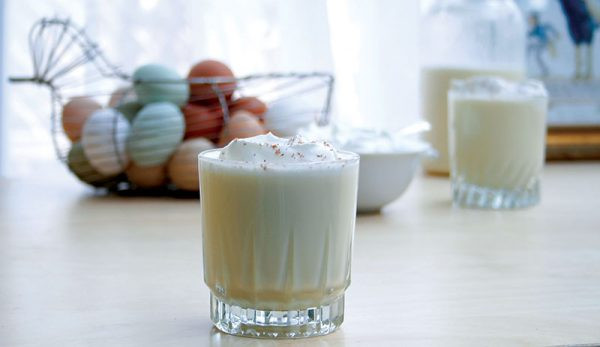 My father was not a New Age man. He wasnāt a fan of āwomenās lib,ā which is what equal-rights efforts were called when I was a kid. Not once did I see him push a vacuum or buy the groceries. His job was to drive Motherāand sometimes meāto the local IGA or A&P (depending on who had what on sale) and wait in the car.

Sometimes, out of curiosity, puckishness or because he wanted the latest Time magazine, heād wander in. Heād drift around the aisles, snacking on a bag of black licorice or a jar of roasted peanuts heād plucked from a shelf. Heād pay for his goodies and then head back to his den on wheels to wait for us.

He was the kind of man who went shopping at the hardware store, the garden center and the liquor store but not the grocery store. That is until November. Thatās when the rules of engagement changed, because thatās when the first shipment of eggnog landed in the dairy case.

My father had a sixth sense for it. And it was the sight of him coming home from work, a carton under each arm and one in handāalready openedāand that telltale āmustacheā from swigs he took in the car, that signaled Christmas had officially begun.

This is my variation on the Christmas tradition.

Add the vanilla bean and paste to a deep, heavy-bottomed saucepan. Over medium heat, add the milk, cream, cinnamon sticks and nutmeg, and whisk to break up the vanilla seeds.

Bring to a gentle boil (this should take about 5 to 10 minutes), then remove from heat. Set aside to allow the flavors to infuse the milk and cream for about 10 minutes. Remove and discard the cinnamon sticks and vanilla bean.

In a large bowl using a whisk, or in the bowl of a stand mixer, beat the egg yolks with the maple syrup until well-combined. Very slowly, add in the milk-and-cream mixture a bit at a time to temper the yolks until completely incorporated. Beat constantly so that the egg yolks donāt cook and scramble.

Add the bourbon, and blend in.

Transfer to an airtight container, and refrigerate for at least 3 hours or until well-chilled.

To serve, pour or ladle into small glasses; this stuff is rich! And this might be a tad indulgent, but sometimes top with a dollop of whipped cream and a sprinkling of grated maple sugar or maple flakes and perhaps a dash more rye should you be feeling particularly spirited.

Keep leftovers in the fridge for up to 3 days in an airtight container; a mason jar is lovely.

Writer Signe Langford is a chicken-keeper, a gardener and a chef. She is the author of Happy Hens & Fresh Eggs: Keeping chickens in the kitchen garden, with 100 recipes (Douglas and McIntyre, 2015).