A tasty way to prepare and preserve a summer harvest, these crunchy kimchi cucumbers are sure to delight with a funky, fermented flavor. 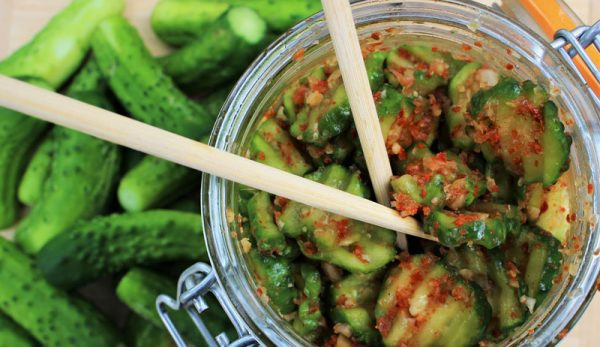 This kimchi cucumber recipe is a twist on the kimchi recipes that I share in my cookbooks. Kimchi is the ferment that got me interested in the world of fermentation in the first place. As a little girl, my grandpa would bring home kimchi that was made by his co-workerâ€™s wife.

His wife was from Korea and made kimchi traditionally, and boy was it incredible! I couldnâ€™t get enough. Iâ€™d gobble it up as soon as it hit the plate, and thatâ€™s where my obsession began.Â

In my early 20s I started to make kimchi with my good friend Michelle. She was my only friend that enjoyed kimchi growing up. Michelleâ€™s mother was born in Saipan, so Michelle was familiar with kimchi as well.

She especially loved kimchi cucumbers. That was the first time I heard of kimchi cukes.

Flash forward a decade to when I was visiting the Big Island of Hawaii with my husband and daughter. We rented a condo right above the famous Da Poke Shack in Kailua-Kona. What a treat that was!

We ate there more times than Iâ€™d like to admit in the one week we stayed at that condo.

Weâ€™d watch the fishermen bring in giant freshly caught ahi tuna straight from the ocean early each morning. Once prepared, the doors would open for business. When all the food sold out, the shop closed until the next morning.

In addition to tuna, the shop also sold lau lau and kalua pork, with various sides including wakame seaweed salad, hot potato salad, crab salad, and of course, kimchi cucumbers. My husband quickly became a fan of kimchi cucumbers. Since then, each summerâ€”once pickling cucumbers are abundantâ€”I make him a jar of his very own kimchi cukes.

Read more: Check out this recipe for fermented asparagus pickles!

Wash cucumbers and gently scrub away any dirt. Discard soft or damaged cucumbers. Slice into 1/4 to 1/8-inch coins.

Once sliced, transfer to a large non-reactive bowl such as glass or stainless steel and sprinkle the kosher salt evenly over the cucumber slices. Use a wooden spoon to mix well.

Allow the cucumbers to sit in the salt for three to four hours, stirring once at the half way point. After several hours, you should see that the natural brine has released from the cucumbers. Strain the cucumbers from the brine, reserving 1/4 cup to mix back into the cucumbers.

Using a small food processor, blend the garlic, onion, ginger and fish sauce (optional) to a puree. Transfer to another bowl and stir in the gochugaru.

When thoroughly blended, mix together with the salted cucumbers, evenly coating cucumbers with the pepper paste. Once mixed well, transfer the kimchi cucumbers to a clean quart-sized canning jar.

If you have a small fermentation jar weight, add it to the jar to push down the produce (careful not to bruise or smash the cucumber slices). Wipe off the rim of the jar with a clean dampened towel. Add the canning jar lid, and tightly screw on the ring.

This kimchi cucumbers recipe is a short 24 hour to 3 day ferment. Ferment at room temperature, ideally between 60 to 75 degrees F (15 to 23 degrees C), and keep out of direct sunlight.

Check on the ferment daily to make sure that the brine covers all the produce. Initially the cucumbers likely will not be covered by the brine in the jar. However within 24 hours there should be enough brine to cover all the produce.

Taste test the cucumbers at the 24-hour point to see if you are pleased with the flavor. If not, allow them to keep fermenting.

Burp the jar daily. Unscrew the lid briefly and tighten it back on to allow any built-up gas to release.

Once fermentation is complete, transfer the jar into the refrigerator, with the brine and all.

Fermentation does not stop once the ferment is transferred to the refrigerator. However it does slow the process way down. The taste and texture will continue to change, therefore this ferment is best enjoyed within six months.

Read more: You can (and should) plant more cucumbers in midsummer. Here’s why.

If you donâ€™t have a food processor, finely chop the garlic, onion and ginger for your kimchi cucumbers.

Using freshly harvested cucumbers is key to keeping the crunch. Try to use produce that has been harvested within 48 hours.

If you donâ€™t have access to gochugaru, you can use an alternate fresh hot pepper, finely minced. This will change the flavor, but will still ultimately be a delicious ferment.Â

For more kimchi recipes written by Stephanie Thurow, check out Can It & Ferment It (expanded 2020 edition) and WECK Small-Batch Preserving, published by Skyhorse Publishing, Inc.

Stephanie Thurow is the Author of Can It & Ferment It (2017), WECK Small-Batch Preserving (2018) and WECK Home Preserving (2020) and Small-Scale Homesteading â€“ coming February 2023! Stephanie is a certified master food preserver, master gardener, and food preservation instructor. She has special interest in vegetable fermentation and water bath canning and is known for creating easy to follow recipes. She loves to garden and lives with her family, pets and flock of hens on her urban homestead near Minneapolis, MN. Connect with Stephanie at www.instagram.com/minnesotafromscratch and www.minnesotafromscratch.com.