Photo by Judith Hausman A squeeze of lemon and an easy mustard sauce are all gravlax needs.   Gravlax is an all-season, value-added dish. It is delicious and incredibly easy, and people will think you are a genius when you serve it. The fancy name and the fact that people don’t make it often lend […] 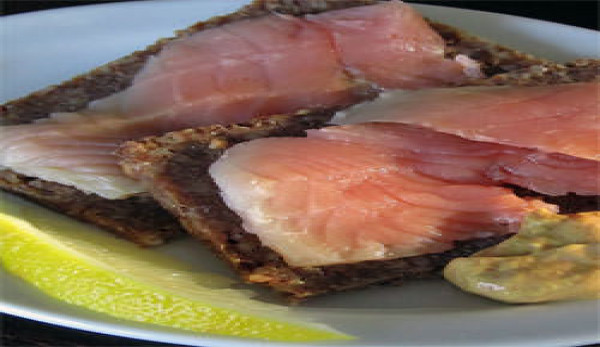 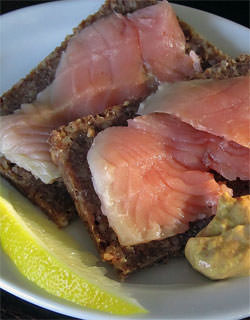 A squeeze of lemon and an easy mustard sauce are all gravlax needs.

Gravlax is an all-season, value-added dish. It is delicious and incredibly easy, and people will think you are a genius when you serve it. The fancy name and the fact that people don’t make it often lend a certain allure to this Scandinavian-style salt-and-sugar-cured salmon. The salt and sugar “cook” the salmon, so all you have to do is scrape off the seasoning, slice thinly and serve. It’s magic.

Wild Alaskan salmon is a model, sustainable fish, so make an effort to find it. Choose two filets of roughly the same shape and size so they’ll match up. You’ll need a minimum of one day’s lead time, but I’d suggest several days, which will allow you to start the gravlax midweek for a weekend appetizer or brunch dish. Once it’s wrapped up in the fridge, it only requires turning over a couple times a day to cure. I use plastic wrap and then foil. Finally, I weigh down the packet with a couple of tomato cans.

The classic seasoning for gravlax is dill and freshly ground white pepper, but I have also used fennel fronds and whole cardamom seeds and have added grated lemon or orange peel. You can also douse the filets with a sprinkle of Pernod or vodka, too.

This is not bagel and cream-cheese salmon; it’s more delicate. I usually serve it with thin slices of dark, crumbly “health bread,” lemon slices, maybe some capers, and a quick stir up of a tablespoon of Dijon mustard and a tablespoon of mayo, mixed. Some people add a little of the chopped herb used in the following recipe to this mustard sauce too.

Do try this at home; it’s brain food that makes you look smart, anyway.

These measurements are rough and can be loosely interpreted.

Lay one filet on a length of plastic wrap, and wipe it dry with a paper towel. Sprinkle it with the vodka or Pernod, if using. Cover it thickly with the sugar, salt and pepper. Cover the filet with dill sprigs. Do the same thing to the second filet and then place it skin side up on top of the first. Some people salt the skin side as well. Wrap them tightly in the plastic wrap, and then wrap the packet in foil. In a dish, weigh the packet down with one to two cans. Turn the packet over every 12 hours for at least 36 hours and as much as three days.

When ready to serve the gravlax, unwrap the filets and carefully scrape off the remaining salt mix. Slice the salmon thinly off the skin at an angle. See serving suggestions above.

Serves four to six, depending on portion size.