Recipe: A Hearty Cobb Salad That’s Right For The Season

More than just a salad, this versatile cobb salad layers a bed of greens with eggs, bacon, blue cheese and veggies for a healthy, hearty meal. 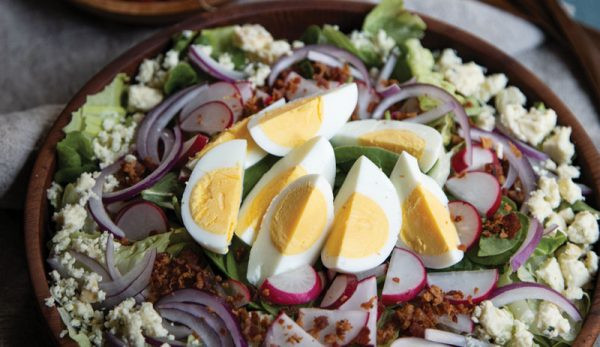 Welcome the warmer weather with this hearty cobb salad with green onion vinaigrette. It combines hard-cooked eggs with spring vegetables.

This fully adaptable recipe can be adjusted to meet your tastes. As the seasons change, use goat cheese instead of blue cheese. You can also use butter lettuce with the romaine or swap out the radishes for cherry tomatoes.

ItŌĆÖs the kind of meal you can enjoy any time of the year.┬Ā

Add all dressing ingredients to a single serve blender, and puree until the onion and garlic are very finely chopped and all ingredients are combined. Set aside.

Working in circular rows, layer the radishes, then the bacon, the red onion and finally the blue cheese. Combine the ingredients as you portion out servings.

Serve with the dressing on the side.

In David Burke’s New American Classics (2009), Chef Burke relates, ŌĆ£Legend has it that Cobb salad was invented by [Robert] Bob Cobb, the owner of the world-famous (and now defunct) Brown Derby restaurant in Los Angeles ŌĆ” It is said that the salad came about when Mr. Cobb needed to make a special presentation to a regular diner who had demanded ŌĆśsomething made just for me.”

Apparently the kitchen had bits and pieces of cooked chicken and bacon, avocado and Roquefort cheese along with the necessary salad makings. Cobb used his artistry to put them together in a unique way.┬Ā

In The Story Behind the Dish (2012), author Mark McWilliams wrote that ŌĆ£weary of the familiar items on the limited menu ŌĆ” Bob Cobb prepared himself a salad of chopped leftover chicken and some other ingredients for a late-night meal. The dish might have been a one-time experiment if some of the movie industryŌĆÖs leading players had not stopped in.ŌĆØ

The Brown Derby had a reputation as a hot-spot for Hollywood celebrities. A few saw what Cobb was eating and ordered the same.┬Ā

A theory also exists that Robert Kreis, the executive chef at the Brown Derby, created the salad in 1929 (the year the Brown Derby’s Hollywood location opened) and named it in honor of Cobb.┬Ā

This article originally appeared in the March/April 2021 issue of Chickens magazine.