Photo by Judith Hausman Matzoh brei is essentially French toast. Passover is the time of year (same time as Easter) when Jews commemorate the flight from Egypt by eating only unleavened bread or baked goods. People have come up with ingenious ways to create recipes with potato starch, finely ground matzoh meal or ground walnuts […] 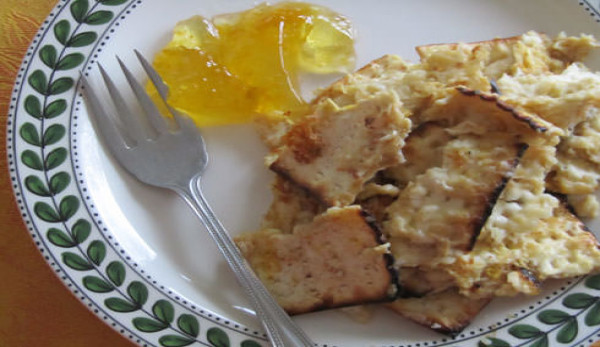 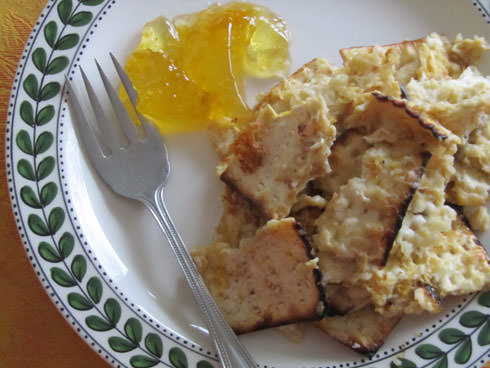 Passover is the time of year (same time as Easter) when Jews commemorate the flight from Egypt by eating only unleavened bread or baked goods. People have come up with ingenious ways to create recipes with potato starch, finely ground matzoh meal or ground walnuts or almonds instead of conventional flour to bake with, using extra eggs for loft. The cracker-like matzoh by itself is pretty good slathered with butter and sprinkled with salt and the new-fangled whole wheat, egg and other versions have a bit more flavor and a slightly less dry texture. Iâ€™ve even made a Heath Bar-like candy with both butter and chocolate thatâ€™s addictive, almost as delicious as dark chocolate-covered matzoh. But despite this inventiveness, we all get sick of all that matzoh after awhile.

What do you do with it? Well, after this weekend, when theÂ seder dinner is done, Iâ€™ll make matzoh brei for brunch using local eggs. Itâ€™s essentially French toast. You soften the crackly matzoh first by running it under cold water and then soaking it briefly in an egg mix before browning it in butter. Serve it with homemade applesauce, the first berries or maple syrup of the season or whatever else you like to eat French toast with.

I like to make a savory version as well. Serving the brei with some sour cream and smoked salmon (or hot sauce) on the side, as well as with garlic,Â onions or shallots and the firstÂ herbs of the season, can turn it into a hefty lunch.

Beat the eggs and milk together. Break up the matzoh into roughly 2-inch pieces. Put the pieces in a colander and run cold water over them to soften. Be careful not to soften them too much. Tumble pieces into egg mix and soak them for 10 minutes. Heat butter or oil in a large skillet and brown the soaked matzoh, moving and turning the pieces gingerly so the egg binds them and they turn golden.

Use a generous amount of butter to brown the brei. Add vanilla and cinnamon (about 1/4 teaspoon per egg/sheet of matzoh) to the egg mix. The condiments you like with French toast are appropriate: maple syrup, fruit or jam.

Use olive oil rather than butter. Add about 1 tablespoon chopped fresh herbs (chives, parsley, cilantro, thyme) per egg to the mix and paprika, salt and freshly ground black pepper, to taste. SautĂ© a small chopped onion or a large shallot and two to three minced cloves of garlic to the pan before adding the soaked matzoh pieces. A little grated Parmesan, cheddar or jack melted on top wouldnâ€™t be bad, either.