Some of my favorite flowers, the Red Hot Pokers, are just starting to come into flower in our garden these days. 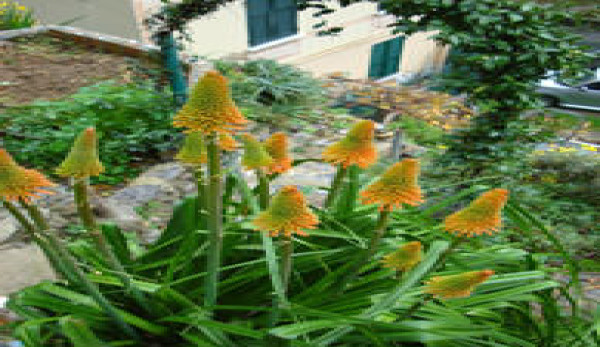 Some of my favorite flowers, the Red Hot Pokers, are just starting to come into flower in our garden these days.Â

These hardy perennials native to South Africa were called Tritoma uvaria for several hundred years, but there was some confusion due to the fact that there was a genus of beetles that also used the same name.Â

Finally in the twentieth century, the Botanical Congress cleared the confusion by changing the plantâ€™s genus name to Kniphofia, to honor an 18th century German botanist named Johan Kniphof.Â

So now, the plants are still called Tritomas, but their official botanical name is Kniphofia.Â  There are about twenty species in the Kniphofia genus, but this one species, Kniphofia uvaria, is responsible for about 95 percent of the horticultural trade.

Tritomas are fairly rugged plants and will tolerate a fair amount of cold, perhaps down to 14 degrees Fahrenheit, and they are often called for in drought-tolerant landscape designs.Â

The young plants are a bit slow to spread at first and while they may flower when young they donâ€™t make a good show until the clump is three or four years old and there are at least five or six plants in the clump.Â  Iâ€™m happy that my oldest clump has 16 flower spikes coming up this year, as that will make a really good show.Â

Iâ€™ve also got several other younger clumps and will get a handful of blooms from each of those, but nothing like the huge lamp produced by the main clump.

Although I have also planted a few yellow blooming Tritomas, the main variety we have in the garden is the classic orange Pfitzer type.Â

Wilhelm Pfitzer was a famous German nurseryman in the mid-18th century and he developed this superior strain from wild plants.Â  Pfitzer was a big developer of new varieties of dahlias, cannas and gladioli and he is certainly one of the reasons that these garden species are so popular in the gardens of today.Â

His was one of the dominant nurseries in Europe for more than seventy-five years, up until the Second World War, and many of the varieties that he developed (like Kniphofia uvaria var. Pfitzer) are still dominant in their categories.Â Â

The plants donâ€™t show up in retail nurseries too often because their foliage is unkempt in containers and when the plants bloom they are too top-heavy to display well.Â

Luckily the mail order and internet suppliers have a large range of different Kniphofia for sale.Â  The little plants one buys will take a few years to really get going, but once they are established, they will last for many years without needing to be divided.Â  In our garden, the Tritomas will flower from now until January and will attract nectar loving birds like hummingbirds and other sugar eaters.

Amazingly, both wild and feral Red Hot Pokers are often considered a weed in South Africa and feral plants have spread widely in Australia.Â  One can find a number of websites that give advice as to how to get rid of this pest!