The Red Poll is a rare, exceptionally hardy, dual-purpose cattle breed raised for beef in North America, but it makes a fine household dairy cow, too. 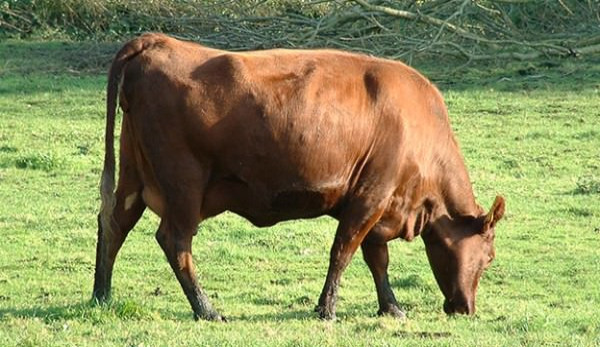 Use: The Red Poll is a rare, exceptionally hardy, dual-purpose cattle breed raised for beef in North America, but it makes a fine household dairy cow, too.

Conformation: Red Poll cows weigh about 1,200 pounds; bulls weigh about 1,800 pounds. The cattle are solid red, though a splash of white on the underline is acceptable. Genetic consistency is the hallmark of this cattle breed and individuals are very uniform.

Special Considerations/Notes: Red Poll cattle are noted for their hardiness, longevity, quiet yet inquisitive demeanor and the ability to thrive on marginal pasture. Calves are born small and grow quickly, making calving problems practically nonexistent. Red Poll meat is fine-grained, tender and tasty, and cows give a good amount of milk for a dual-purpose breed. Red Poll cattle generally produce 1,250 gallons of milk per year through their teens or about 10,000 pounds of meat. In 1933, one Red Poll cow, Florabel, had an 11-year milk total of 108,310 pounds- an all-breed record for the era. The Red Poll is listed as Threatened on the American Livestock Breeds Conservancyâ€™s Conservation Priority List, and itâ€™s listed as endangered on the Rare Breeds Canada conservation list.