Generally red in color, Red Wattles may have black markings--and are distinguished especially by the thumb-sized wattles that hang from their lower jaws. Red Wattles produce a fine, lean meat, described as a cross between beef and pork in taste. 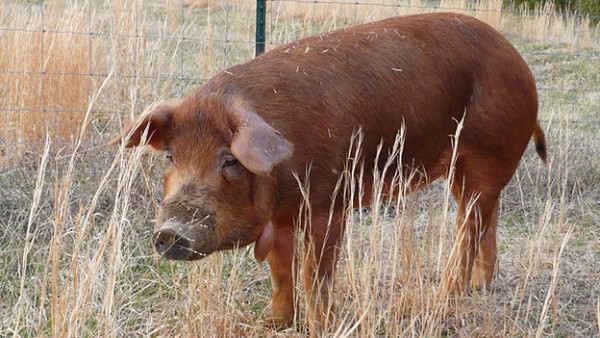 Use: Red Wattles produce a fine, lean meat, initially prized by the French for its excellent flavor. They tend to grow muscle first and put on fat after reaching 300 pounds; butcher weight of 280 to 300 pounds can be achieved in about seven months. Raising them in environment-friendly systems, where they are used to turn compost of root up marginal grounds, is popular.

History: The Red Wattle is believed to have originated in New Caledonia, a French Island near Australia and cam to America via New Orleans with French immigrants. They’re also know at the Red Waddle, Woods Hog or Tassled Hog. Many factors have contributed to the near-extinction of the Red Wattle, including discrimination against its very lean carcass during years when lard was a primary fat source.

Conformation: The Red Wattle’s red coloring, which often includes black markings, helps prevent sunburn. The head is lean with a straight snout and ears that are erect. The most identifying feature is the wattle that hangs from the lower jaw at the neckline. Each wattle is thumb-sized in diameter, hangs one to five inches in length and contains cartilage. Expect well-fed Red Wattles to reach 500-700 pounds in 1 1/2 years and full size of 1,000 to 1,200 pounds by age 3.

Special Considerations/Notes: Red Wattles are raised from Canada to Texas under a variety of production methods, including sustainable farming methods (multi-species management, intensive grazing and deep-bedded systems. Most breeders supplement pasture-based systems with grains, corn and other farm surplus. Small numbers of these rare pigs are available from dedicated breeders.