Want good, healthy soil for years to come? Use regenerative agriculture methods to let your livestock help improve your cropland and pastures. 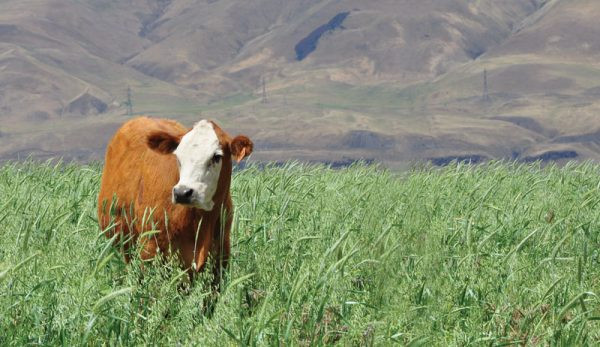 Many crop and pasturelands are now depleted of soil nutrients due to continuous cropping or grazing over the past decades, without adding much organic matter back into the soil. Learning about regenerative agricultureâ€”holistic management, soil biology and the importance of soil healthâ€”has helped many farmers and ranchers regain productivity on their land without the expensive inputs of inorganic fertilizers.

There are various regenerative agriculture techniques a farmer can do to add more nutrients to the soil and improve plant health and vigor. Among these are:

When livestock are crowded together, spending a short time in each new small pasture, they graze competitively and less selectively. They eat a little bit on every plant rather than overgrazing their favorite plants.

They also leave a lot of manure and urine in each small area, which adds nutrients to the soil. And they trample whatâ€™s left, creating litter that adds even more organic matter to the soil.

Many old-time farmers knew the value of having animal impact on the land. Before the advent of commercial fertilizer, farmers rotated livestock with their crops to keep the soil fertile and more productive for the next crops.

Whether you are raising crops or livestock, optimum soil health depends on five main principles of regenerative agriculture.

Managing for soil health is a new idea for most people, though some folks would say that we are simply going back to an earlier type of agriculture. In recent decades, weâ€™ve focused on managing the aboveground production on the land. But we havenâ€™t paid enough attention to whatâ€™s happening belowground.

Even though some people have been doing soil tests, these tests generally only address the physical and chemical aspect of soils, the pH, soil structure, soil texture, etc. These are important, but probably the most important and critical component has been ignored. The soilâ€™s biological activity is the key component for health.


Learn how the Combs family uses regenerative agriculture on their California hobby farm.

Soil armor is a new term to most folks. It just means that we should never have bare ground.

In most cases, this regenerative agriculture concept can be accomplished by always having some forage or crop residue. Bare ground is detrimental to soil health because soil organic matter is lost. Carbon escapes and soil temperature may increase to a level that limits biological activity. We no longer have the right combination of microbes.

Many soils today donâ€™t have enough organic matter. The carbon in organic matter provides food for soil organisms. If we keep plowing, we keep releasing the carbon.

Reduced tillage in cropping systems can help keep a cover on the soil. And providing adequate recovery time for pasturesâ€”along with never grazing them down too shortâ€”ensures plenty of litter and protection against bare ground and erosion.

When livestock overgraze and the plants are short or some are dying and leaving bare ground, there isnâ€™t enough vegetation to hold moisture when it rains. And it runs off.

Land that is well covered with a variety of vegetation has much more holding capacity. It absorbs water like a sponge.

For many years, farmers and ranchers have planted monocultures in their crops or pastures, instead of a variety of plant species.

Even in a pasture mix there may be only two or three species of grass and maybe one legume. The regenerative agriculture practice of increasing the plant diversity aboveÂ­ground provides a more balanced diet for livestock. And it allows for a more diverse and thriving underground community.

Specific soil microbes require specific plant types. The more diverse the microbial population in the soil is, the better the forage will respond, with increased vigor and production.

When a pasture includes grasses, forbs and legumes, it uses less water than a monoculture and produces more biomass. If thereâ€™s a mix of warm- and cool-season grasses and some forbs, there is almost always someÂ­thing green and growing in its favored season. This provides a nutritious diet for livestock and extends the grazing season.

Legumes in the mix provide natural fertilizer for the grasses and have the ability to take nitrogen from the air. This is due to their symbiotic relationship with rhizobium bacteria.

Diverse cover crops that include legumes can be planted in the fall and facilitate carbon and nutrient cycling through a time period when a pasture is normally dormant.

It’s in the Microbes

Soils are most productive when the soil microbes have access to living plant material. A living root provides a food source for beneficial soil bacteria. And the symbiotic relationships between plant roots and mycorrhizal fungi continue to occur.

These unique fungi build an association with plant roots that increases the plantâ€™s ability to collect and store water and nutrients throughout the soil profile. In return, the fungus receives sugars from the plant. When these fungi are present, itâ€™s a clue that the plants and soil are healthy.

When we use regenerative agriculture to promote and maintain biodiversity on our land, we have a healthier ecosystem with better resilience to drought and other environmental challenges. Ground that is covered with a variety of plants creates a canopy of taller plants that shades the ground and the shorter plants. The ground temperature stays cooler and the understory of plants stays greener.

The ground can soak up every drop of rainfall rather than losing it to erosive runoff. In a dry year, the stockman with biodiversity in his/her pastures will have more forage. And on a wet year, less damage from flooding will occur.

Native pastures are very resilient because of their diversity. A polyculture is the most efficient user of water.

Read about 8 ways you can start improving your soil health now.

Adaptive grazing is a holistic management strategy that enables us to utilize one of our best land management tools (livestock) more effectively.

The goal is to mimic natural grazing. Wild grazers move in large herds over the landscape, eating down certain areas. They leave plenty of urine/manure â€śfertilizer ” and trample what they donâ€™t eat

Then the animals move on and donâ€™t return until the forage has fully recovered. This type of animal impact increases soil health and function.

Adaptive grazing includes several methods, which include management intensive grazing (MIG), rotational grazing and ultrahigh stock density grazing (also called mob grazing). These systems are based on how the plants need to be grazed and/or to meet the nutritional requirements for the grazing animals.

Itâ€™s called adaptive grazing because there are no set rules for pasture use. The timing and stocking rate change with the season and the yearâ€”weather and growing conditions, etc.â€”depending on the needs of the plants.

Good grazing management entails managing for certain residual stubble heights on key grazing species and proper grazing distribution. The most important key to any grazing system is the amount of rest you give the plant, allowing it to fully grow back before itâ€™s grazed again.

If a person can avoid season-long grazing on pasture, breaking it up into segments and using it rotationally, plant health and productivity is always improved.

Rotational grazing concentrates animals on a smaller area where their urine and manure naturally fertilize the soil. This also gives other areas a chance to regrow. This increases the amount of rest for each pasture and improves overall grazing distribution, to uniformly graze.

Instead of overgrazing favorite plants and leaving some of the others, livestock in this situation tend to eat all the plants, utilizing more total forage biomass. This works even more effectively with multi-species grazing, such as cattle and sheep, because they tend to prefer different plants and more uniformly utilize a pasture.

Rotational livestock grazing is the simplest and least expensive way to improve soil and forage production, whether itâ€™s just a few acres or several thousand. All it takes is periodically opening and shutting gates or moving a portable electric fence.

Grazing is preferable to making hay. To produce a good crop of hay, most people add fertilizer every year. The plants utilize the fertilizer, then the hay is cut and removed from the field â€” constantly removing soil nutrients. By contrast, when you graze the forage, you are recycling about 90 percent of those nutrients back into the ground.

Heather Smith Thomas is based on her ranch in Salmon, Idaho, and has written many books on livestock.