Nick Sheets from the Ohio-based Henmick Farm & Brewery tells us about the importance of keeping things local and community-focused. 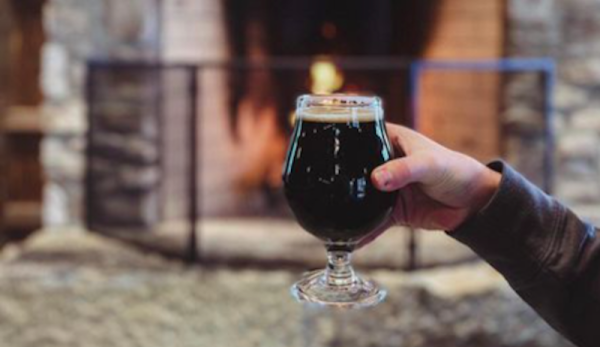 “When my family’s farmland became available, I dusted off an old brewery business plan,” says Nick Sheets, looking back on founding Henmick Farm & Brewery in Delaware, Ohio. After shifting the business plan to a rural setting, Sheets pitched the brewery idea to his aunt and siblings, who were owners of the family farm.

The brewery officially opened in July of 2021.

Situated on land in the family since 1916, Henmick Farm & Brewery counts an 1860s barn as a focal gathering point for visitors. Priding itself on being a family-centric brewery, the rotating selection of brews on tap displays a commitment to utilizing ingredients sourced from Ohio.

We spoke to Sheets about reinventing family farms and the importance of locally-sourced ingredients. We also got into the appeal of winter brews.

From Home Brewing to Farm Brewing

“Craft beer has been of interest to me ever since I visited my first microbrewery up in Vermont more than 20 years ago and making my first batch of home brew with my cousin in his kitchen around the same time,” says Sheets.

“Since that first microbrewery experience and almost every one since then, the dream of owning and operating a brewery has been something Iâ€™ve wanted to do,” he continues, adding that founding the brewery has been a way to “reinvest and reinvent” the family land.

When it comes to linking farms to the creation of beers, Sheets highlights the brewery’s Ohio Pale Ale and Hard Apple Cider as drinks that benefit from using 100-percent Ohio-sourced ingredients.

“Our two primary suppliers of malt source the grain from either their own fields or from a network of growers in Ohio and surrounding states,” explains Sheets. “Although this isn’t directly linked to our farm, it is linked to many farms throughout the state, which was a conscious decision we made before we made our first batch of beer.”

“By buying our malt from companies that source the grain locally,” he adds, “it helps build a supply chain that will ultimately provide another crop choice for Ohio farmers.”

“Two of our more popular seasonal beers, the Mexican Style Lager and our Harvest Ale, use Ohio malted corn and roasted butternut squash, respectively,” says Sheets when asked to spotlight a couple of brews.

“The Harvest Ale’s butternut squash is grown in our garden onsite, picked in the fall, roasted and pureed with various spices,” he continues. “Combined with some caramelized brown sugar, itâ€™s a smooth fall beer and a great alternative to the more traditional pumpkin ale.”

As winter gets into full swing, Sheets says that the brewery’s traditional Porter is a natural match for the frosty weather.

“It’s a lovely smooth dark beer with chocolate and coffee undertonesâ€”perfect for sipping in front of our taproom’s fireplace during those Ohio winters.”

Read more: You don’t need hops to start brewing your own beer from homegrown ingredients.

“This place is very special to me. By opening it up to the public, we hope our guests see the beauty in the spaces we’ve created for them to gather with friends and family,” says Sheets as he considers the rewarding impact of running the brewery after its first year-and-a-half in business.

“It was my goal and vision for Henmick to reinvent our small family farm, honor those who came before us, celebrate fellowship and share the place I love most with others.”