Some exotic plants can wreak havoc in our gardens, but others, such as invasive honeysuckle, can indirectly affect public health. 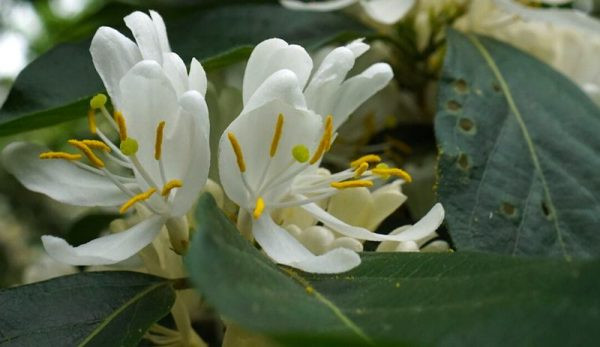 Sprawling Asian bush honeysuckleâ€”as well as its many cousinsâ€”certainly smells lovely. It has value to the honeybees, which sip up its nectar. The exotic shrub also helps out area birds that feast on its copious berries.

But, if you take a harder look, you’ll see that many kinds of honeysuckle aren’t so sweet after all.

Turns out, we invited this non-native plant to stay more than a century ago.

In its 1916 publication The New Book of Plants, the U.S. Office of Foreign Seed and Plant Introduction noted, â€śThis species is valuable as an ornamental shrub in the cooler sections of the United States.â€ť

Gardeners and landscapers used honeysuckles to create borders, to provide cover for wildlife and to control soil erosion.

In 1895 Author Donald McDonald wrote, â€śAnother common name by which [honeysuckle] is known is the Woodbine, because it winds itself as it were in wedlock to every tree and shrub growing near.â€ť

He continued, â€śThis climbing plant … so firmly [embraces] its supporter that we often see young trees and branches indented like a screw by the pressure.â€ť

Asian bush honeysuckles include the common-named Amur, Tartarian, Morrowâ€™s and Belleâ€™s honeysuckles. These are especially problematic because they easily spread from our gardens to native forests. The shade-tolerant shrubs choke out existing trees.

They also compete for resources in the forest understory. This prevents new, young trees, as well as smaller plants, from taking hold.

Worse yet, the formation of these nearly impenetrable stands of honeysuckle affects all of the animals which depend on a variety of native trees and plants for food.

Not every species loses, though. Researchers from Missouri-based Washington University, the University of Missouriâ€“St. Louis, St. Louis Childrenâ€™s Hospital and the University of Wisconsin found a link between large stands of honeysuckle and greater numbers of disease-carrying ticks.

White-tailed deer flocked to these honeysuckle-rich areas for shelter. As a result, the lone star ticks that feed on their blood flourished, too.

But when researchers removed the honeysuckle? Deer activity and the number of disease-carrying ticks decreased.

Think you’ve got some Asian bush honeysuckle on your property?

Before you grab the loppers, keep in mind that there are some non-invasive honeysuckle varieties. For instance, coral or trumpet honeysuckle (Lonicera sempervirens) is native to North America.

Generally, most honeysuckle varieties retain their leaves long after other plants have dropped theirs. That means identifying and removing them nowâ€”before everything else is out in its leafy gloryâ€”is your best bet.

For its part, Asian bush honeysuckle has thick, glossy, opposite leaves and shrubby branches that can extend up to 15 feet long. (Here’s a good identification resource.)

Check out these DIY projects that put honeysuckle control to good use.

We removed honeysuckle bushes that were especially large and well-established with a mechanical root-pulling tool.

Several types of root-pullers are commercially available. They all generally use leverage to wrench deep root systems out of the ground. Unless you have several acres’ worth of shrubs to pull, you might want to look into renting rather than buying one outright.

For small-to-medium honeysuckle plants, we used loppers to cut their branches and trunks nearly to the ground. Then we painted a glyphosate herbicide solution directly onto the exposed honeysuckle stumps. (The mixture was one part of a 51.8 percent glyphosate solution to one part water.)

The MC-IRIS group leaders also added a water-soluble blue colorant to the herbicide solution and poured the mixture itself into sponge-topped art marker bottles. This enabled volunteers like me to daub the herbicide directly onto the newly exposed tops of our target stumps.

We could also tell whether we missed any spots and avoid harming the surrounding plants.

You’ll need to check back periodically to be certain you eliminated your own problem plants. Continue to snip branches and reapply glyphosate solution as needed.

Once the coast is clear, you can replace the non-native, invasive honeysuckle with native alternatives. These can provide just as much food and cover for area wildlife.

Some to try include spicebushes, serviceberries, Eastern redbuds and flowering dogwoods. Of course, your specific microclimate and growing conditions ultimately will influence your final choice.