How to Remove Tree Stumps (Without Creating Large Holes)

A little strength, a little patience and a pair of pruning loppers can unite to help you remove small stumps without big holes. Here's how. 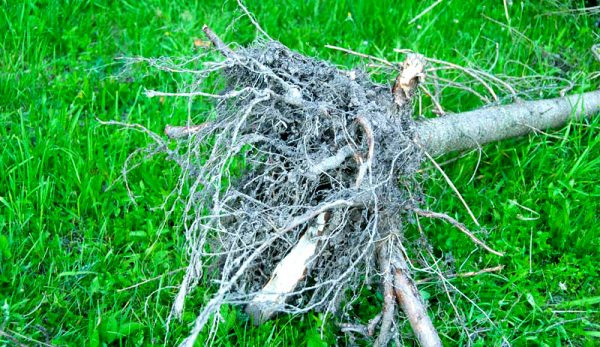 Over the past week or so, I have pursued an interesting farming project. It demonstrates that having patience, a little strength and the right tools can be an effective combination when attempting to dig up small tree stumps.

In essence, Iâ€™ve continued my long-term attempt to reclaim the edges of the fields on my farm, which are being slowly invaded by trees, primarily pine, spruce and ash. I aim to clear back to the original edges (marked by lines of large trees and rocks) and ensure that the reclaimed ground is smooth enough to be mowed with a riding mower, whichâ€”when regularly doneâ€”prevents the edges of the forest from creeping back out again.

But hereâ€™s the problem: Some of the pine and spruce trees marching outward have quietly grown to eight or 10 feet tall, with diameters of about three inches or so at the base. Itâ€™s hard to cut such a tree like flush to the ground in a way that wonâ€™t interfere with a lawn mower. This means that the stumps should really be dug up and removedâ€”which is easier said than done.

Fortunately, because these stumps are pretty small compared with those of mature trees, Iâ€™ve developed a pretty simple technique to remove them from the ground without exerting too much effort or creating a large hole that needs to be filled. First, I cut off the top of the tree about four or five feet above the ground. Then I remove all the lower branches, leaving behind a tall â€śstump.â€ť

Then, holding tightly to the top of the stump, I slowly and carefully rock it back and forth to loosen its grip on the ground. By pushing the stump in a given direction, I can raise up the ground on the opposite side, revealing where the key roots are buried. I can then scrape away some of the top soil (itâ€™s not difficult) and cut the roots with my pruning loppers.

Youâ€™ll need to rock the stump in all directions to make sure that you find and cut all of the primary roots (I’ve found there are usually about five or six), but once this task is done, the stump will basically be freed from the ground, allowing you to twist and pull it away to break the few remaining small roots. In the span of about 10 minutes (even less if youâ€™re lucky), you can have the entire stump out of the ground using nothing but your own strength and some pruning loppersâ€”no tractor or chainsaw required.

What’s more, removing stumps this way leaves essentially no holeâ€”once you smooth out any loose soil, all thatâ€™s left is a mild depression (if that) to indicate that a tree once grew in that location. Iâ€™ve already removed six trees this way and am very pleased with the resultsâ€”give it a try and see if it works for you too.