My late father-in-law collected nutcrackers in his later years. Nathaniel was his first. 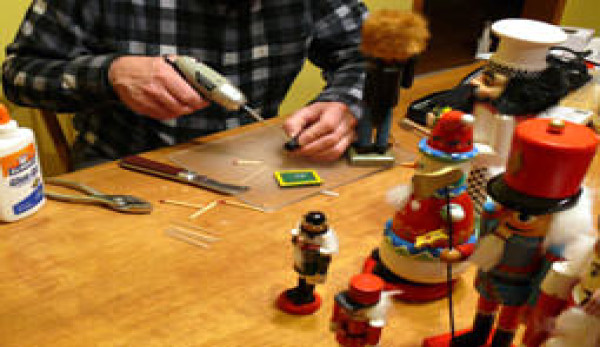 My late father-in-law collected nutcrackers in his later years. Nathaniel was his first. The traditional soldier nutcracker became the object of annual adventures that Grandpa penned to our children. They took special delight in the stories, as their job on our annual Thanksgiving visit was to “set out the troops.”

Eventually, Nathaniel commanded more than 120 fellow nutcrackers in an amazingly broad range of styles, from bread baker to fisherman to golfer to even a set of Wizard of Oz characters.

By the time we inherited the collection a few years ago, some of them were in pretty tough shape. Arms and other parts were coming loose, and some had broken off completely. This year, my wife was determined to set up a triage for the troops before they were put away.

Our kitchen table was designated the first-aid station. Surgical tools consisted of a small power drill/driver, pliers and a sharp carpenter’s knife. Essential supplies consisted of glue, toothpicks and wooden matches, the latter two being handy alternatives to dowel sticks.

In most cases, bits of dowel stub and excess glue from previous repair attempts remained. The sharp knife cleared away protuberances and old glue. Slowly but safely, the low power, slow-speed drill produced fresh sockets. Appropriately sized chunks of matchsticks and/or toothpicks were dipped in glue and pressed into place with the help of the pliers. Parts were returned to their original place, and glue was allowed to set.

In less than an hour, we had repaired more than 20 nutcrackers, including our old friend Nathaniel. Like so many repair jobs around the house, it seemed to be over before we had hardly started, leaving us to wonder why we had put it off for so long.