The ECO Farming method offers another way for farmers to increase crop yields without conventional tilling or no-till practices. 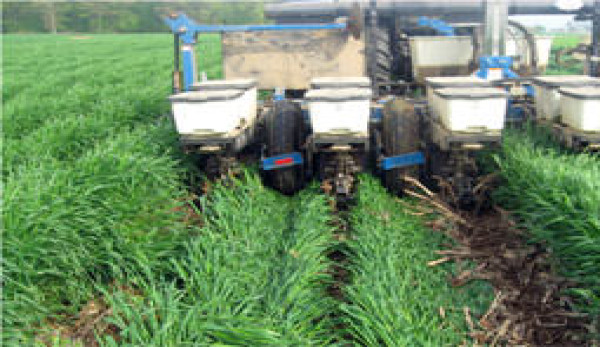 The Ohio State University Extension, in conjunction with the Natural Resources Conservation Service and the Ohio No-Till Council, has developed an alternative to conventional and no-till systems.

The method, known as ECO Farming, is a new concept for farming in the 21st century, says Jim Hoorman, OSU ExtensionÂ cover crops specialist. The acronym stands for â€śEternal No-till, Continuous-living cover and Other best-management practices.â€ť

“In other words, absolutely trying to eliminate tillage as much as possible,” Hoorman says.

“Continuous-living cover means farmers try to keep a living crop on the soil 100 percent of the time,” Archuleta says. â€śThe goal is to protect the soil from soil erosion, increase water infiltration and decrease nutrient runoff.”

Other best-management practices include the concept of controlled traffic, water-table management where applicable,Â manure management and integrated pest management.

“The goal is to use an integrated system of conservation practices to solve environmental nutrient issues associated with hypoxia and eutrophication to improve water quality,” Scarpiti says.

Brandt has been practicing ECO Farming on his farm for 15 years and says he has reduced his fertilizer inputs by 50 to 70 percent and herbicide costs by 50 percent. He also has reduced his fuel consumption. In the process, he added soil organic matter, which has improved soil health and increased crop yields.

Plants reserve 25 to 40 percent of their carbohydrate supply for feeding the microbes, which in turn recycle nitrogen, phosphorus and water back to the plant roots. This natural process improves soil structure and increases water infiltration and water storage.

The ECO Farming innovators insist that for farmers to accept this system, it must be economically viable and be ecologically sound and environmentally sustainable in the long run. The researchers say it appears to be all three.

“For 100 to 200 years, farmers have been tilling the soil and basically mining it of nutrients, destroying soil structure and losing 60 to 80 percent of soil organic matter,” Archuleta says. “Now we can use advanced knowledge of soils, soil health and soil ecology to work with Mother Nature rather than against her.”