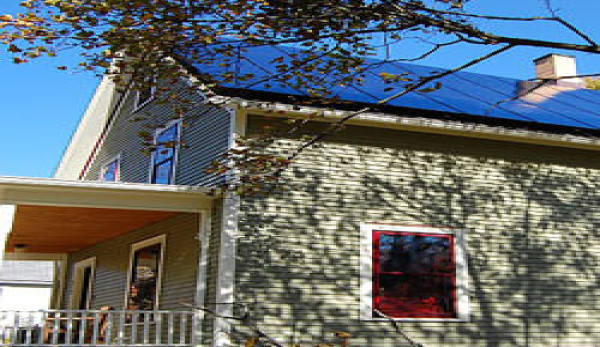 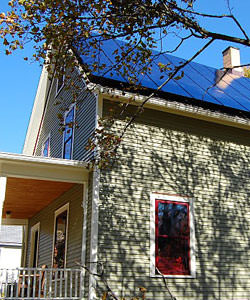 Ann Arbor, Mich., residents Kelly and Matt Grocoff renovated their house in the city’s historical district to be net zero. The project included the installation of solar panels on the house’s roof.

Armed with a checklist of actions that included insulating hot water heaters, inflating car tires, composting kitchen scraps, shopping for organic foods and installing low-flow showerheads, residents of Ann Arbor, Mich., were put to the test. Their challenge: Cut CO2 emissions by at least 5 percent during the month of February.

“There are so many reasons our [household] bills change from month-to-month, from the temperature to the price of fuel, and it’s hard to know what impact our actions are having,” explains Andrew Brix, energy programs manager for the city of Ann Arbor. “This program was an opportunity to provide direct, quantifiable impacts of changing certain behaviors.”

The Ann Arbor Residential Energy Challenge started as a pilot project in October 2009. At that time, the goal was twofold: to gauge whether residents would volunteer to reduce their greenhouse-gas emissions and to determine realistic goals for energy reduction.

The pilot program was a success. A total of 70 households signed up and achieved an average CO2 savings of 7 percent—far exceeding the expectations of a 2-percent reduction. (Calculations were based on Ann Arbor’s average residential CO2 emissions of 170 pounds per month.)

Buoyed by the results, the city of Ann Arbor decided to run the Energy Challenge again in February 2011.

As part of the latest challenge, 130 households signed up with the goal of reducing their CO2 emissions by at least 5 percent in four categories: household energy, food, transportation and next steps (extra efforts for bigger reductions).

Brix explains that the calculator, which was available only to participants for the duration of the Energy Challenge, calculated the CO2 emissions savings and subtracted them from average household emissions to create an overall greenhouse-gas savings.

The city of Ann Arbor is still calculating the official results of this year’s challenge. Preliminary findings show that the 130 households participating in the Energy Challenge surpassed the 5-percent goal, reducing their carbon footprints by an average of 6½ percent.

“Seeing these sorts of reductions is significant,” Brix says. “If residents can achieve a 5-percent reduction [in greenhouse-gas emissions] each year, it has really good implications for the future of CO2 emissions in Ann Arbor in the future.”

Although there were no prizes awarded to residents with the highest reductions (aside from lower energy bills), that could change in the future.

“[We wanted] to avoid extrinsic motivation,” explains Nathan Geisler, energy programs associate for the city of Ann Arbor. “But we are now looking to award several energy audit rebates and … home energy monitors for successful participants with the hope of following up with recipients of these awards over this year to see how these resources further impact personal energy usage and behavior.”

Currently, the city of Ann Arbor plans to hold the Energy Challenge on an annual basis; the next challenge is scheduled for February 2012. However, Brix anticipates that it could become a year-round event.

“We could frame this as a broader public challenge and if people want to join on an ongoing basis, we might consider making it permanent,” he says.

How has your city encouraged energy conservation? Tell us on the UF forums. ]]>