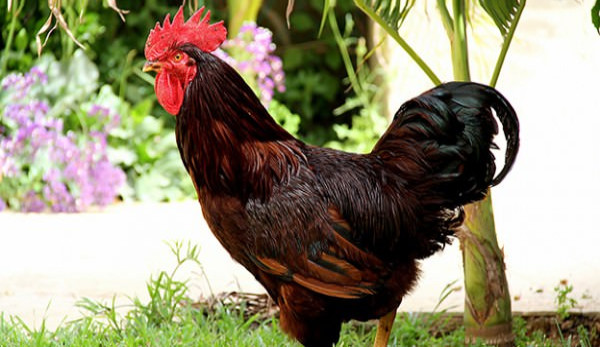 Use: Rhode Island Reds are one of the most popular farmyard chickens for their laying ability and usefulness as a table fowl. They lay a large brown egg. True Rhode Island Reds are a deep mahogany red and forage well on range. They also tolerate semi-confinement although the roosters can become aggressive.

History: Named after the State of Rhode Island, these majestic birds were bred from Red Malay Game, Asiatic native stock and Leghorns in the section around Little Compton near Buzzardâ€™s Bay and Narragansett Bay. The Single-Comb variety was admitted to the American Standard of Perfection in 1904 and the Rose-Comb Variety in 1905.

Conformation: Often described as â€˜brick-shapedâ€™ this breed has a distinctive horizontal, oblong body with fairly close feathering. The deep mahogany red offset by black tail feathers with a brilliant green sheen make this breed beautiful in a showroom or in a pasture. They have a medium-sized single or rose comb depending on the variety and both varieties have the same standard weights:Cock: 8 Â½ lbs, Cockerel: 7 Â½ lbs, Hen: 6 Â½ lbs, Pullet: 5 Â½ lbs

Special Considerations/Notes: Many hatcheries sell â€˜Production Redsâ€™ as Rhode Island Reds, typically these breeds are lighter in color and body weight and do not carry the distinctive brick shape of the Rhode Island Red indicating their impurity or evidence of crossbreeding.