Photo by Rachael Brugger Knobby rhubarb pushing itself up through the earth is a sure sign of spring around here. In my northern climate, we’re still waiting on berries and it will be months before stone fruits or apples are in season, so it’s always fun to make the first rhubarb desserts. With no time to […] 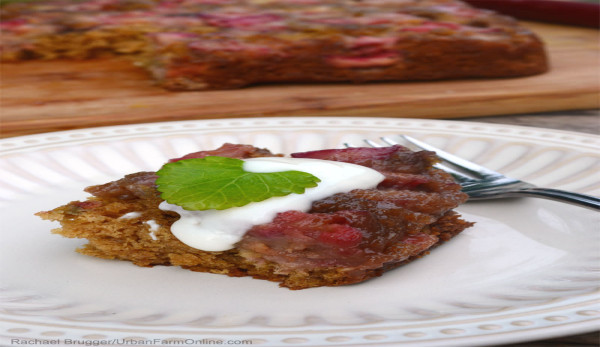 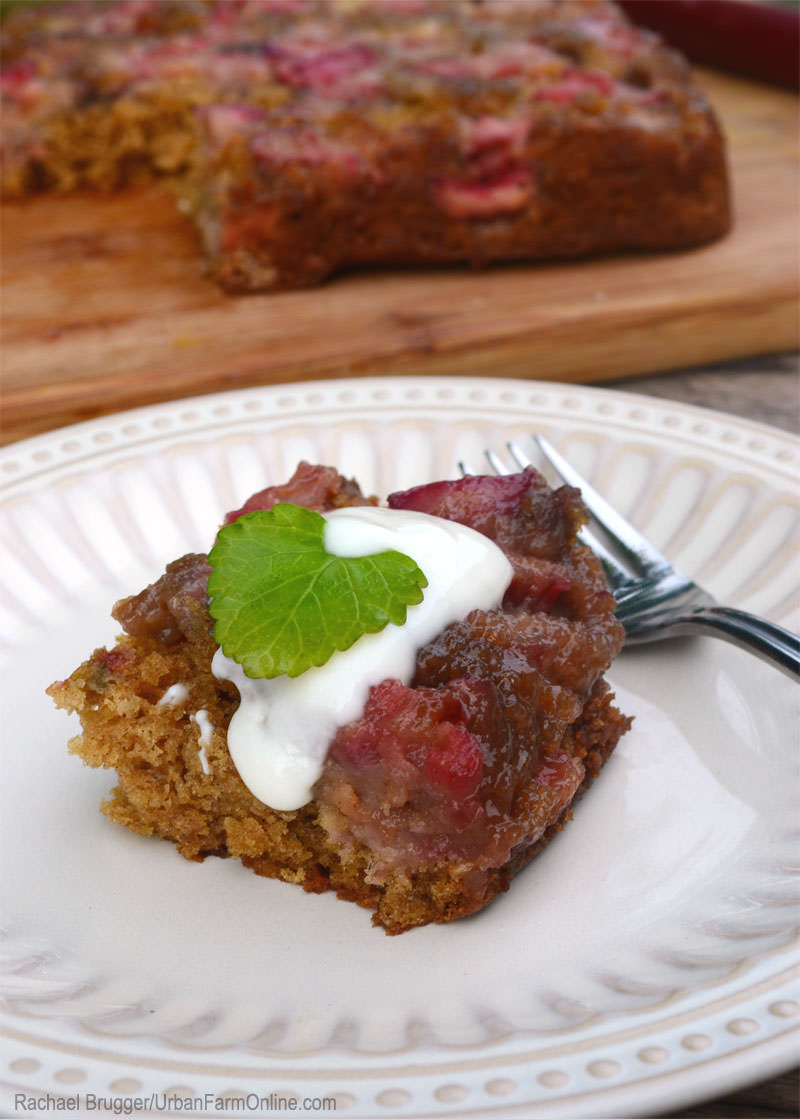 Knobby rhubarb pushing itself up through the earth is a sure sign of spring around here. In my northern climate, we’re still waiting on berries and it will be months before stone fruits or apples are in season, so it’s always fun to make the first rhubarb desserts. With no time to make a pie, I simmered some rhubarb in water until it achieved a sauce-like consistency, and then flavored it with honey and vanilla. You can also make a simple rhubarb sauce with orange, lemon or cinnamon flavors to complement the notoriously tart stalks.

Rhubarb sauce can easily be stored in your kitchen refrigerator or canned for pantry storage until you’re ready to use it for a treat. A dessert I recently brought to friends is an upside-down cake, spiced with ginger and cardamom, in which my rhubarb sauce played a leading role. Thin-sliced uncooked rhubarb will work just as well in this recipe, though, as the slices will soften nicely as the cake cooks on top of them.

You’ll love this cake because it’s so simple to make, but don’t rush for forks after you take it from the oven. Let the cake cool a little but not entirely before you flip it. Run a knife around the edges of the cake to loosen it, then position an upside-down plate on top of the baking dish. Hold the two securely together and flip them over. Eventually the cake will drop down onto the plate. If a little rhubarb stays in the dish, just scrape it up and spread it carefully over the cake.

This cake begs for vanilla ice cream, but as a healthy substitute, I served it to my friends with a dollop of whole-milk yogurt.

Combine oats and water in large bowl. (If you choose not to boil water, let oats sit for few hours.)

Preheat oven to 350 degrees F. Melt butter in an 8-by-8-inch pan as the oven heats.
Remove pan from oven and sprinkle the 1/4 cup sugar over bottom. Stir slightly, then spread the rhubarb slices or sauce overtop. Set aside.

Then beat egg and oil into the softened oat mixture. Combine the flour mix with the oat mix, taking care not to over-mix.

Pour batter over rhubarb, spreading it evenly. Bake for about 40 minutes until a toothpick inserted in the center comes out clean. Cool briefly and run knife around the edges. Invert pan onto serving platter.