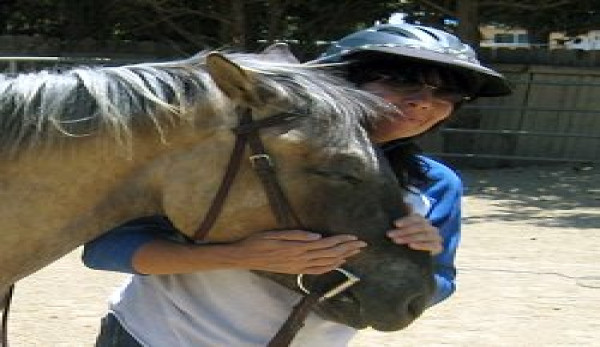 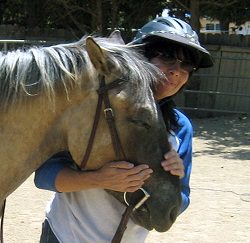 Here I am with my Spanish Mustang, Rio.

Last Saturday, I asked my trainer, Lisa, if I could ride Rio for the first time. After a year of groundwork and some time to grow, he was ready for light riding. Lisa had put four rides in him and he was doing well; so, I figured it was my turn.

Lisa thought it was a great idea, so I headed over to the stable dressed to ride with helmet in hand. Lisa had Rio tacked up in a borrowed western saddle and his snaffle bridle. She got on and rode him first. He was being a bit stubborn. “The fifth ride is when they start trying stuff,” she said. “They figure out what is going on and then see what they can get away with.”

I wasn’t too thrilled to hear this. Lisa was the only rider Rio had ever had, and now this was his fifth ride. Would he try something on me?

After Lisa tuned Rio up, it was my turn. Barely 14 hands, my little Spanish Mustang stood perfectly still as I got on. So far, I was impressed.

As soon as Rio started walking with me on his back, I instantly felt comfortable. I don’t know if it’s because he felt like Milagro, or just because I just felt safe with Rio’s calm and gentle nature. All I knew was that I felt like I’d been riding this horse my whole life.

We walked around the round pen as Lisa called out suggestions to me from the sidelines, telling me to keep my hands light and keep him moving. After a few times around, I asked her if I could trot. She was hesitant, but said OK, and came into the round pen with the lunge whip to help Rio—who is a bit on the lazy side—move into the trot. When my little horse started jogging, I couldn’t believe it. He was incredibly smooth. I could barely feel anything beneath me; it was if we were floating. He was smooth as silk.

I rode for about 10 minutes, and then we called it quits. I easily dismounted as Rio stood perfectly still. I hugged Lisa and then embraced my little spotted boy. Rio basked in the glory as I cooed over him. His usually nippy annoying self was nowhere to be found. His eyes were closed and he was completely relaxed, enjoying the love I was showering on him.

My cousin videotaped the entire ride, and I got home quickly so I could post it on Facebook. I was elated with the responses from all my horsy friends. It’s always a big deal when an owner rides her young horse for the first time. It was a day I’ll never forget. Watch Rio’s First Ride With Audrey

Audrey Pavia
Keeping farm animals in the city can be a real hoot. Follow freelance writer Audrey Pavia’s adventures in Southern California with a yard full of urban livestock, including horses, chickens, a Corgi and an urban barn cat. She somehow manages all these silly critters while working full-time, with no one to help her but her husband, Randy, a born-and-raised New Yorker. And you thought “The Simple Life” was out there?