I'm teaching my Mustang that there's nothing to fear in the city's streets. 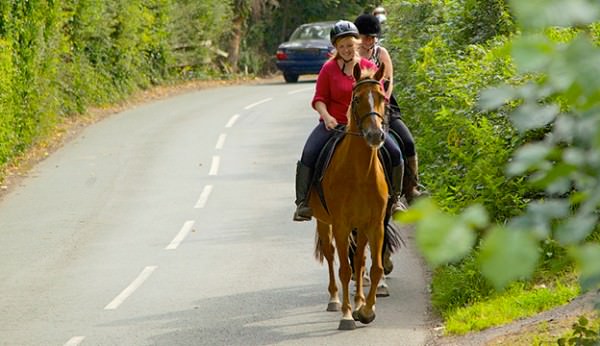 I’m fortunate to live in a rare suburb about 50 miles from downtown Los Angeles where animal keeping is not only allowed but encouraged. Horses are king here in Norco, Calif., an incorporated town of about 27,000. In fact, the official city moniker is Horsetown, USA.

Just about everyone in Norco has at least one horse, and trail riding is the No. 1 pastime here. But it’s not trail riding the way most people think of it. When I get on my horse and head out the gate, I’m not riding in to the wilderness where I will see deer and bobcat. Instead, I’m hitting a grid consisting of 90 miles of urban trail.

Taking a horse out on urban trails is more akin to playing a video game than going on a relaxing ride. There is no end to the horse-eating monsters that leap out at you on a nearly constant basis.

On a typical ride around town, my horses regularly have to deal with gardeners wielding weed whackers, moms unloading car seats in driveways, barking dogs running at fences (or worse—ambush dogs that lurk in the bushes and leap out just as you pass), people pulling weeds (a hunched down person looks a lot like a crouching mountain lion to a horse), kids with remote control cars, and a whole host of other assorted scary things.

It takes a special horse to deal with all this stimuli. When I first moved to Norco, I quickly discovered that my Appaloosa gelding could not cope with all this stuff. After a couple of particularly terrifying rides where he came completely unglued, I sold him back to his previous owner, who lived in the country. The next gelding I bought turned out to have even less ability to cope with this insanity than the previous horse. I sold him to a home in a rural area.

Fortunately for me, Milagro came into my life. Spanish Mustangs are known for being smart, sensible and averse to wasting energy spooking at silly stuff, and Milagro is very typical of his breed. As he and I cruise the urban trails of Norco, we face all kinds of challenges. It’s rare when he spooks, and when he does, he usually just jumps in place. Not to say that it was always this way. The first year I had him, a charging dog or crouching weeder would sometimes send him into a 180 spin. In fact, he spun once so hard at a bird that flew out of a bush that he sent me sailing through the air and into the dirt.

But years of dealing with urban trail bogeymen has turned Milagro into a solid, steady mount. And now, he’s helping his little “brother” Rio learn to negotiate all the scary stuff. Because Rio is also a Spanish Mustang, he’s solid by nature. And as I ride Milagro around town with Rio following alongside, my young horse is learning that though there’s a lot going on around here, there really is nothing to fear.